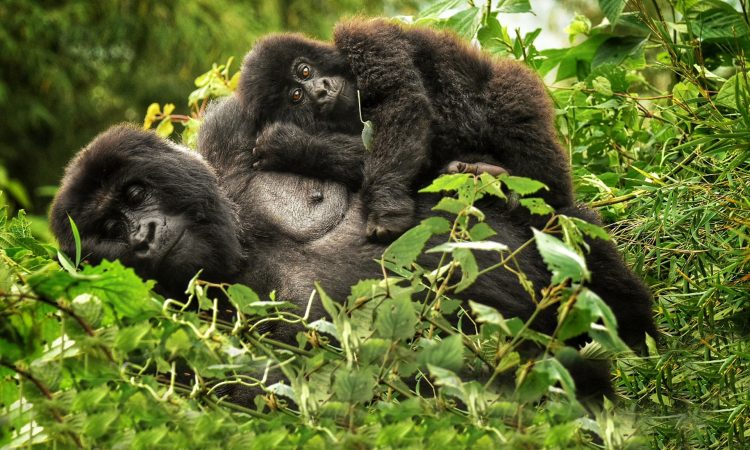 When you visit volcanoes national park, you will get to participate in gorilla trekking where you will visit a gorilla family among the remaining half of the world’s remaining mountain gorillas. The different habituated gorillas can be visited at any given time of the year because of the good weather conditions within the park. During gorilla trekking you will embark on your hikes to the different virunga mountains depending on the different gorilla groups that are assigned to you for instance the karisimbi gorilla group is found on mount karisimbi, the Ugenda gorilla family is usually found along the slopes of mount sabyinyo among other gorilla families.

The gorilla trekking process in the park is quite interesting because you will get to see a number of attractions including the different bird species, the golden monkeys among other species. In the park, you will get to the bamboo trees where the gorillas are found, you will get to see the behaviour of the gentle giants while in the wild for instance their feeding patterns you will see infants suckling the breasts of their mothers for food, you will also see them eating the bamboo trees which is quite an exhilarating experience to come in contact with the primates which you will see in an hour you get to spend with the gorillas, photography can also be carried out to keep exciting memories of the your experience with the gentle giants thus Activities in volcanoes national park.

Just like gorilla trekking in the park, golden monkey trekking also involves hiking the Virunga Mountains to get to the bamboo trees where they can find the primate species. Coming in contact with the golden monkeys is such an easy activity compared to gorilla trekking which involves the primates moving from one place to another to establish overnight nests, when it comes to the golden monkeys searching for them is quite easy because they do not make new nests every night.

Therefore accessing them is quite easy making golden monkey trekking an easy activity as compared to gorilla trekking. During the activity, you will see a number of attractions while hiking to where the golden monkeys are found for instance you will see the twin lakes of Burera and Ruhondo, Lake Kivu among other attractions.

Twin lakes of Burera and Ruhondo

The twin lakes of Burera and Ruhondo can be accessed after hiking mount Muhabura which will lead you to the twin lakes of Burera and Ruhondo where you will have the opportunity to carry out a number of activities like boat cruises, birding, sport fishing, picnics, the lakes will give you perfect views for photography among other activities that will enable you have an amazing adventure thus Activities in volcanoes national park.