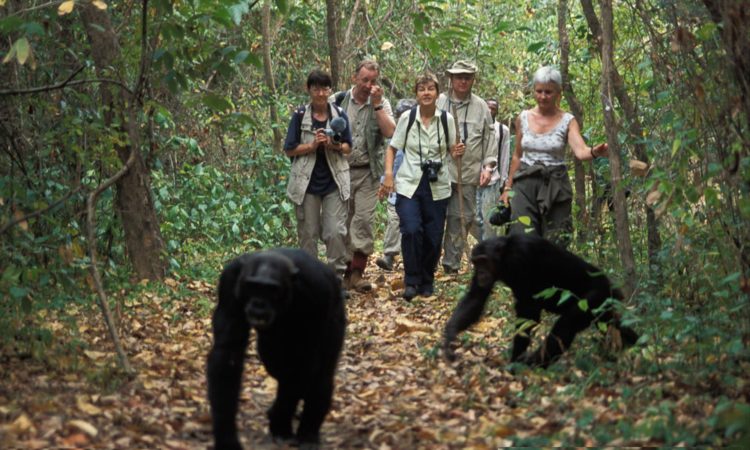 However, with the increased numbers of tourists that visit the country to take part in a number of activity in the park, it has led to the exposure of a number of activities that were not initially highly participated in have picked on for instance chimpanzee trekking in queen Elizabeth which is carried out in Kyambura gorge also known as the valley of apes because of the different primate species like the black and white colobus monkey, Mona monkey, vervet monkey, silver monkey, dent’s monkey and the dominant species which are the  that can be seen when you visit.

What to expect during chimpanzee trekking?

The Kyambura gorge in queen Elizabeth national park is found on the eastern part of queen Elizabeth national park and for tourists interested in taking part in chimpanzee trekking in Kyambura gorge, they are expected to first obtain a chimpanzee trekking permit from a trusted tour operator or from the Uganda wildlife authority. Once you obtain your gorilla trekking permit, you will make your way to the gorge but t should be noted that the activity is quite challenging because it involves hiking down and up the valley to get to habituated chimpanzee troops and for tourists to participate in the activity, they are expected to be 12 years and above to qualify to participate in the activity.

After being cleared for chimpanzee trekking in Kyambura gorge, you will participate in the briefing sessions where you will understand the rules and regulations to follow for an amazing and safe experience in the park. as you hike through the forest of Kyambura gorge you will come across a number of attractions like bird species for instance; Carruthers’s cisticola, white-winged scrub-warbler, slender-billed starling, baglafecht weaver, yellow-browed citron, papyrus canary, thick-billed seedeater, you will also have the chance to see the numerous primate species as you make your way to your habituated chimpanzee troops.

When you get to the troops you will have an amazing experience observing a number of features of the primates like how they co-exist with one another, their feeding patterns, how they communicate for instance they can be heard hooting, the chimpanzees communicate by clapping and slapping the ground, you will watch the adult females feeding their infants and during movement you will get to see the infants clinging on their mother’s fur among other interesting features of the primates that  will  you will get to see when you spend one hour with the habituated chimpanzee troops to make  the activity quite memorable