Home » Getting to Volcanoes National Park

Getting to Volcanoes National Park

Getting to Volcanoes National Park is a simple task as travelers only have to gather the necessities and follow the simple routes that are designated to reach the park. Volcanoes national park is known for a number of attractions but most importantly the mountains. The park has gained a lot of popularity globally because it’s one of the only habitats of the endangered mountain gorilla species where you will have a chance to see the beautiful unique species. 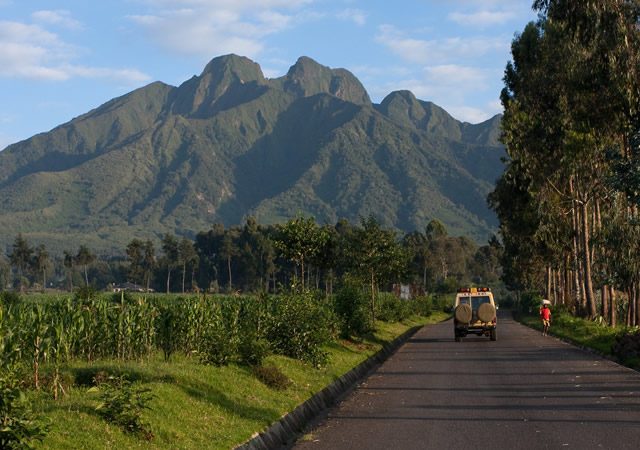 Aside from the mountain gorillas, there are a number of attractions that a tourist can enjoy once they visit the park, some of the attractions that they can see include; the Virunga Mountains which can offer amazing experience once you carry out the virunga mountains hike in Rwanda. Among the virunga mountains that you will get to hike include mount sabyinyo which will offer amazing experiences for instance once you hike to its peak, you will be in three countries at the same time that is Rwanda, Congo and Uganda which is quite interesting. Mount Muhabura which is such a challenging hike because the mountain it is one steep mountain.

Mount karisimbi where you will have a chance to see Susa and karisimbi gorilla group, at the mountain also you will get to see where Dian Fossey established her research station at Karisoke in order to protect the endangered mountain gorillas. Mount Bisoke has a number of attractions as well including; the Ugenda gorilla family, a number of bird species,  you will also see the largest crater lake in Rwanda on top of the mountain known as lake Bisoke which offers amazing views being a habitat to a number of bird species. Mount Gahinga where you will have a chance to see the Hirwa gorilla family, golden monkeys and a number of activities.

While you are in the park, you can also participate in other activities aside from gorilla trekking which can be done during the Rwanda gorilla tours where you will see a number of gorilla families and you will be able to understand their behavior in the wild. Other activities that can be carried out in the park including birding and this is because the park is a habitat to over 250 bird species making it a birder’s destination. Some of the bird species that can be seen include; the blue turaco, Ross’s turaco, coqui Francolin, long-tailed cisticola, bubbling cisticola, Miombo wren warbler, Chubb’s cisticola Archers ground robin, red-faced woodland warbler, Ruwenzori double collared sunbird, Collared Apalis, Ruwenzori turaco, handsome francolin and the strange weaver among other bird species.

Golden monkey trekking can also be carried out in the park where you will have the chance to spend the time with the beautiful stubborn primates whose golden fur will catch your eyes. Before you get the chance to participate in the above activities, you will first have to access the park in order to be part of the amazing activities. Access to the park is quite easy because of the good transport network and the available means that tourists can use to ensure that you have a safe trip to volcanoes National Park.

Getting to Volcanoes National Park

Volcanoes national park is about 120 kilometers from Kigali International Airport and for tourists using air transport, they can land at the Kigali international airport where you will be picked by your tour operator who will drive you for 2 hours to reach the park. From Gisenyi city which can also be visited during the Rwanda cultural tours, it will take you 1 hour and 30 minutes to reach the park which is quite a short distance compared to Kigali city. While heading to the park to take part in the adventurous activities, you will see a number of attractions along the way, for example, the way Rwandans operate their business, the beautiful views of the different hills and so on.

For solo travellers, they can opt for public transport means which can be got from the Kigali city bus terminal or in the Gisenyi bus terminal where you will transfer to Musanze town and from there you will get private means to transfer you to the park. Alternatively, you can opt for self-drive services to the park by hiring a car from Kigali which will be a bit expensive than public means but out will be assured to have the best experience because you will not be bothered by a number of people making different noises while they travel.