Rwanda Golden monkey trekking is one of the tourism activities that are being sought after by tourists on Rwanda Tours and this has gained popularity because they are also listed as the endangered monkey species in the world. In Africa, golden monkey trekking can be done in the Virunga Mountains that is in Uganda-Mgahinga national park, and in Rwanda, Volcanoes National Park. 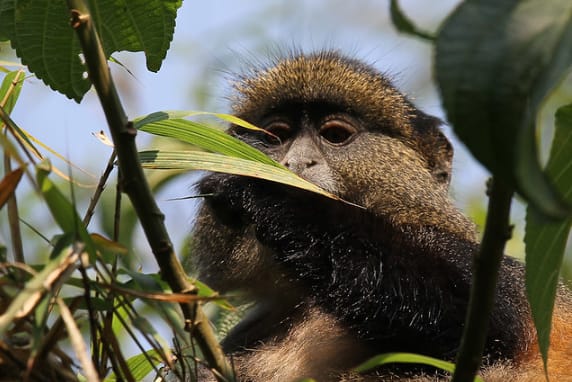 Rwanda golden monkey trekking can be carried out in Volcanoes national park in Rwanda. The park is a home to a number of wildlife species including the famous Rwanda mountain gorillas that can be found after hiking the Virunga Mountains in the park namely; Mount Karisimbi, Gahinga, Bisoke, Muhabura, sabyinyo all over which have distinct vegetation, different animal species that can be found, and different Rwanda gorilla families like the Ugenda group, Susa group, sabyinyo, karisimbi, Amahoro, Hirwa, Bwenge, Umubano and kwitonda gorilla groups.

For tourists on Rwanda tours to participate in the activity of Golden Monkey trekking, they have to access Volcanoes National Park. The park is located in the districts of Volcanoes National Park is situated within the districts of Burera, Musanze, Rubavu, and Nyabihu.  For tourists interested in Rwanda golden monkey trekking they will have to access the park which is quite easy because of the availability of good transport network and means of transport to and from the park this has enabled a number of tourists to access the park.

From Kigali it will take a tourist to reach the park within 2 hours because of the 130km in between the two cities, the park from Gisenyi is 76 kilometers which take about 1 hour and 30 minutes and from Musanze which is the shortest distance of 13 kilometers and takes about 23 minutes for tourists using road transport.

Volcanoes National Park Rwanda has a variety of tourist attractions that will catch the eyes of the tourists while on their Rwanda tour which will involve the Rwanda golden monkey trekking the attractions include buffalos, black-fronted duikers, bushbucks, bush pigs, spotted hyenas, black and white colobus monkeys,  baboons, red-tailed monkeys among others.

The park has a beautiful landscape characterised by the 5 Virunga mountains in Rwanda that is mount Bisoke, mount karisimbi, mount sabyinyo, mount Muhabura, and mount Gahinga all of which have different attractions like the Rwanda Mountain Gorillas, the different vegetation covers for the tourists who are interested in Botany, the different butterfly species like butterfly species like the cabbage white, monarch butterfly, old-world swallowtail, mourning cloak, peacock butterfly. Bird species like the blue turaco, Ross’s turaco, coqui Francolin, long-tailed cisticola, bubbling cisticola, Miombo wren warbler, Chubb’s cisticola which can be seen while on a trip to the National Park.

The Park offers a variety of activities like gorilla trekking which is one of the most popular tourism activities in Africa and this can only be carried out in Uganda that is Bwindi impenetrable national park and Mgahinga national park in Congo in Kahuzi Beiga National Park and Virunga national park and in Rwanda in only Volcanoes National Park with 11 habituated groups, the parks issue 80 permits daily which enables different people that are interested in the activity.

Hiking is also carried out and for tourists that have hiked the different Virunga mountains, they serve as living testimony of how the hikes are rewarding in the different mountains because of the different attractions that are relaxing, satisfying and eye-catching. For example for a tourist that has hiked mountain Muhabura, they can see the twin lakes of Ruhondo and Burera which offer breathtaking views and a chilling breeze. On to mountain Bisoke, tourists are able to see the Bisoke crater lake, on-mountain sabyinyo peak, the tourist is able to have spectacular views of Lake Kivu and Lake Bunyonyi. So each Virunga mountain in Rwanda is able to offer different attractions it all depends on the tourists on their Rwanda tour to unlock the beauty hidden within the vegetation cover of the mountains.

Golden monkeys are found in the Albertine rift that is the Virunga Mountains, the monkey species are listed among the endangered animals but this doesn’t mean it will affect the tourist when they are on their Rwanda trip interested in golden monkey trekking. The park has over 1000 golden monkeys in total and these are habituated into two groups and these have different characteristics as explained below;

Social structure: The golden monkeys are usually found in large groups with over 60 members and these are found mainly in bamboo trees of the Virunga Mountains. Among the different groups of the Rwanda golden monkeys, there is a dominant male that is able to mate with as many females in the group as possible without the females opposing. The male during the mating season can move from one group to another in order to mate with other females. The golden monkeys are diurnal animals that during the day they are highly active jumping from one tree branch to the other, moving around different areas looking for food and during the night time, they are always resting in the bamboo tree branches.

Just like the Rwanda chimpanzees in Nyungwe national park, the female golden monkeys take responsibility for the young ones from birth. The gestation period of a golden monkey is 5 months and it gives birth to only one young one, the female golden monkey can take up to 2 years to get pregnant again. When the young one is born, it’s the duty of the mother to breast feed it, and for the first months the mother introduces it to the life in the wild that is to say it teaches it how to jump from one tree branch to another, how to collect food and so on.

Diet: The diet of the golden monkey is not complex as compared to other wild animals, the most common food they consume is the bamboo however they can also eat shrubs, flowers and also fruit and to them they prefer fruit to other types or sources of food and it can clearly be seen in the season where fruit is readily available and in plenty, they consume it more than any other food and also they can abandon other foods for fruit.

Habitat: Rwanda golden monkeys can be found in the bamboo trees along the different Virunga Mountains in Volcanoes National Park Rwanda, during the day they move from one place to another looking for food that is mainly bamboo or fruit, shrubs, flowers and so on and once they reach a spot with plenty of food they prefer it to other areas without the food and when night falls, they use the area as their habitat  they establish their nests on top of the bamboo trees and they can be seen in groups of 4 golden monkeys in order to be ready just in case of any danger or alarm. The infants always sleep in the same nests as their mothers for protection.

How to obtain a Rwanda golden monkey trekking permit

Golden monkey trekking permits to Volcanoes National Park can be obtained by tourists from their tour operators and also from the Rwanda development board which is the tourism board for Rwanda and they go for only US$100 for all of the tourists interested in the activity. It is necessary for tourists undertaking a gorilla trekking tour to book the permits 3 months before the due date to avoid inconveniences and also to avoid missing out on the activity and since there are only 2 habituated groups of golden Monkeys in Rwanda it limits the number of tourists that participate in the activity which is not the case for the Rwanda mountain gorillas which have 11 habituated groups and give a chance to over 88 people daily to carryout gorilla trekking.

There are two habituated groups of golden monkeys for tourists to trek, for tourists to participate in the activity while on their Rwanda tour, they will have to present their permit to the reception of volcanoes national park where then tourists are given a guide that is able to guide them through their trekking time, that is by leading the tourists way to the different habituated groups in the Volcanoes National Park.

On meeting the golden monkeys, a maximum of one hour is given to the tourists to engage with the monkeys, take pictures of the monkeys seeing their different habits while in the wild for instance jumping from one branch to the other, eating fruit, flowers and many more which is quite mesmerizing for the tourists on their Rwanda tour.

Once the one hour with the primates is done, tourists head back to their vehicles or continue to other parts to participate in other activities which are quite interesting. Other than Rwanda golden monkey trekking, tourists on their Rwanda tour can participate in activities like; Rwanda gorilla trekking, butterfly viewing,  birding, cultural encounters which offer memorable experiences, hiking of the Virunga mountains, visiting the Dian Fossey grave, visiting the Musanze caves and many more which all offer thrilling experiences.

Tourists on their Rwanda tour that are interested in Rwanda golden monkey trekking have a variety of accommodation facilities to choose from in order to participate in it and because the Rwanda Golden monkey trekking activity starts early the following 0facilities are within the proximity of the national park making it easy for tourists to access the park in time for it.

The different accommodation facilities offer different services to ensure that the tourist enjoys their stay for example 24 hour room service, excellent customer care, well furnished and ventilated rooms, clean restrooms, well-trained security personnel that ensure the safety of the person and their property, dining services, swimming pools and so on. These facilities may include the following which caters for midrange, budget and luxury tourists; Da Vinci lodge, Le Bambou gorilla lodge, La Palme hotel, Gorilla volcanoes hotel and many others all of which are found 30 minutes away from Volcanoes National Park