Kahuzi Biega National Park is the only home where you can find the eastern lowland gorillas in Africa and one of the national parks in Africa that will offer the best experiences when it comes to Congo safaris. The park boasts of a number of attractions including 136 mammal species, over 300 bird species, over 1100 different plant species and a number of different vegetation zones like the equatorial rain forest, swamp forest, peat bog,  bamboo forest among other vegetations zones that are distributed all around the park making it one of the national parks in Congo that should not be missed out on while on East African safari. 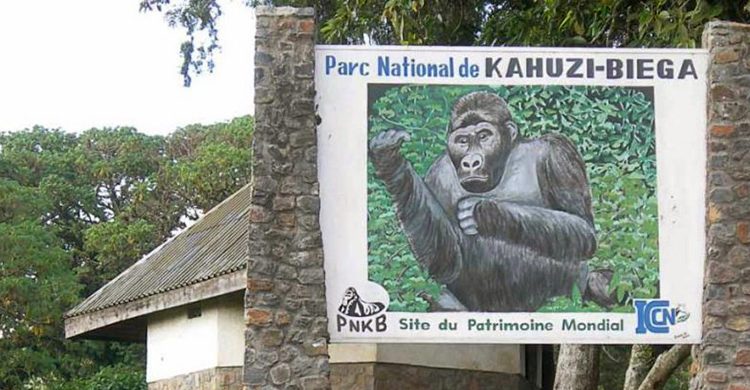 The park derived its name from the two dormant volcanoes that can be seen within the park mount Kahuzi and Mount Biega hence the name Kahuzi Biega. It was established because of the conservation desires of one Belgian photographer Adrien Deschryver in 1970 and one of the major causes for the establishment was the fauna of the park that was destroyed during the Congo crisis in 1960-65. The main purpose was to protect the eastern lowland gorillas that were undergoing poaching and because of the high Risks that the eastern lowland gorillas were under this led to the establishment of the national park.

There is ease while accessing Kahuzi Biega national park which is another factor why you should visit the park.  When you’re in Uganda or Rwanda, you can access the park through the Bukavu border post. It should be noted that from Bukavu to the visitor centre of the park it will take you approximately two hours and if you’re in a rush to go to the park you can opt for flight whereby you can use a   chartered plane at Miti or Kavuma airport to access the park in relatively the shortest time of travel as compared to road transport.

The park has 136 mammal species including the African elephant, buffaloes, antelopes and so on different primate species like the golden monkeys, blue monkeys, black and white colobus monkeys, baboons and so on that can be seen within the different vegetation zones of the park, among the different animal species within the park the eastern lowland gorillas are the most famous and they are the highly anticipated primate species in the parks that tourists from different countries come to Congo to see. For botanists, the park will give you an amazing experience because of 1178 plant species and the different vegetation zones that can be seen and studied at any given time of the day provided you make arrangements with the park staff.

Kahuzi and the Biega mountains are believed to be dormant volcanoes but because of the fact that they are not active like mount Nyiragongo, they do not offer anything to the tourists, they offer magnificent views at the different viewpoints, on their given lowlands, you can see the different eastern lowland gorilla families, they are also a habitat to the numerous bird species that can be seen in the tropical rainforest, bamboo trees found on the mountains. Therefore if you’re interested in seeing a variety of biodiversity you should hike the mountains to witness the beauty the park has hidden from its outside world.

You will also see how the gorillas co-exist with one another, their playtime and if you have a chance you will see how they make their nests for overnights. It will be a great experience seeing the gorillas in their natural habitats and by this, you will find out the 10 facts about the gorillas, the difference between the lowland gorillas and the mountain gorillas which are confused by the people.

This is another interesting activity that should not be missed out while in the park and after the gorillas have been successful in the habituation process which usually takes two years, they are available for gorilla trekking and thus it increases on the Congo gorilla families that can be trekked at any time.

Hiking: Hiking in the park is another activity that will not only enable you to see a number of tourist attractions but also exercise in the long run. You can choose to either hike mount Kahuzi or mount Biega depending on your preference. All the different mountains will ensure that you have an amazing experiences from a number of attractions that can be seen for instance at the peaks, you can see Lake kivu which is Africa’s 6th largest fresh water lake and a number of attractions, on the mountains you can also find different gorilla families in the park.

Community encounters: Just outside the park you will have a chance to mingle with the different people of the community to understand their ways of living their cultural customs and the different practices, in the different communities will perform cultural dances and skits will be performed in order to entertain the visitors. Local dishes will be prepared and you can choose to be part of the authentic experience which you will later have a chance to taste and hence making memories in the country.