Gorilla trekking in Congo will offer you the most rewarding gorilla tours experience while in the country because of the unmatched experiences that are offered while in the Congo gorilla safari tours. The democratic republic of Congo also referred to as Congo by its natives is a country found in central Africa that is rich with natural resources which have attracted many foreigners in the country to explore the beauty of the mother land. 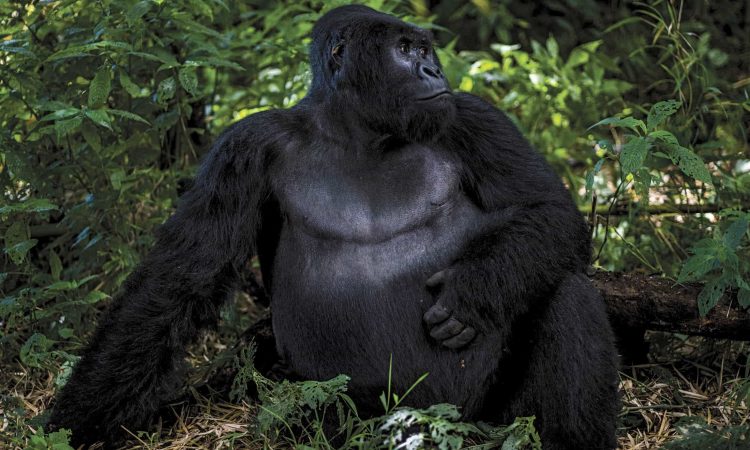 Animal species like the different gorilla species for instance the lowland gorillas, the mountain gorillas a high number of chimpanzees, forest elephants, bushbucks, okapi Basenji and many more not forgetting the different rainforests which makes an exporter of timber in order to earn income for the gorilla trekking is not as famous in Congo like the way it is in Bwindi impenetrable national park, mgahinga gorilla national park in Uganda or even in Volcanoes National Park Rwanda.

Virunga national park: Virunga national park has attracted many tourists because of the interesting activities that can be seen when tourists visit it. The park is located in Kinshasa, the capital city of the Democratic Republic of Congo. The park has a number of tourist attractions that have attracted tourists including the Nyiragongo Mountain and Mikeno Mountain, mount Nyamuragira, and mount sabyinyo.

Kahuzi Biega National Park: Located near Bukavu town, the has a number of attractions that can attract tourists while carrying out the Congo tour, for instance, the dormant volcanoes of Mount Kahuzi and Mount Biega. It is also home to the eastern lowland mountain gorillas and a number of other animal species including the African forest buffalo, African bongo, hippopotamus, the leopard, low land Bongo, Rwenzori otter shrew, mount Kahuzi climbing mouse, Albertine owlet and many other species which attract tourists on their Congo tour.

Ntokou Pikounda national park: The park has a high estimated number of mountain gorillas which has attracted a number of which has attracted many tourists to visit the park in order to carry out gorilla trekking the park is estimated to have over 1000 gorillas which makes it a great gorilla tour destination. Other animals that can be seen include the chimpanzees whose concentration is more than 900 in total and the elephants which are estimated to be over 800 in total.

Salonga national park: The park is one of the most beautiful parks in Congo with a number of relief features including the Salonga river, the beautiful tropical rainforest which is the largest in the whole of Africa, the park is mainly accessed through water transport on the Salonga river this has not hindered visits to the park, a it has improved the experience of the tourist because while connecting to the park, tourists will see a number of attractions like the rivers, water birds and many more.

Nouebale Ndoki national park: the park is famous for its high concentrations of the different species of apes including the lowland gorillas, the bongo and the chimpanzees however it should be noted that the park has a number of attractions like different animal species like the African forest buffalo, African elephant, the African leopard, the duikers, bongo and many other different animal species which can attract tourist to visit the park.

In the park, gorilla trekking is carried out in the Mbeli bay which has a high concentration of mountain gorillas

Maiko national park: The park is also located in Kinshasa the capital of the democratic republic of Congo, it is found within the remote forests of the country. The park is known for a high concentration of primate species like the eastern chimpanzees, the eastern lowland gorillas, African forest elephants and a number of its endemic animal species like the Okapi, Congo peafowl and the aquatic genet which are some of the many attractions that can be found in the park.

How to obtain a permit for Gorilla trekking in Congo

For a tourist to participate in gorilla trekking in Congo they should purchase a gorilla permit which should be obtained from the park headquarters directly that is Virunga and Kahuzi Biega national parks this is because of the absence of tour companies that can purchase the permits however this is not the case for Uganda and Rwanda where tour there are different tour companies that can purchase them for the clients the price of each gorilla permit is 400USD for all the tourists.

Necessities to participate in gorilla trekking in Congo

Tourists are expected to have received the yellow fever vaccination and it is also recommended that the tourists should be typhoid, meningitis, and rabies-free this is because the gorillas can easily contract diseases from humans during their gorilla trekking activity.

It should also be noted that gorilla trekking in Congo is a whole day activity that is tourists are expected to pack lunch along with some drinking water to avoid hunger and thirst during the hikes.

What involves in gorilla trekking

After tourists have obtained the gorilla tracking permits, from the different headquarters of the national parks, before embarking on your hike to search for the gorillas, a guide will take through a brief about the whole experience what to expect, the guidelines to be followed while in search of the gorillas and the do’s and don’ts, he will brief you about the gorilla family that tourists are going to visit that is to say the brief history as explained above about each gorilla family in the parks that can be habituated.

After the briefing tourists will be accompanied by the ranger and a guide in order for your experience to be safe and interesting, tourists will continue hiking to the gorillas where once you have come into their contact, tourists will then spend an hour with the giants. After the elapse of that time, they will then head back to their starting point which marks the end of their journey.

Best time to carry out Gorilla Trekking in Congo

Congo is characterised with two seasons the dry and wet season, it is advisable for tourists to participate in gorilla trekking during the dry season that is from June to September and from September to February. During the low seasons that is March to May and October to November, there are discounts given to tourists in hotels which helps in cutting the tourist’s budget.

The best time for gorilla tracking experiences by tourists is the waterless seasons of January to February and June to September a time where gorillas move to the lowlands in search of fruit this, in the long run, makes tracking easy.