Lowland Gorillas vs Mountain Gorillas is simply a comparison to show the differences between the two species of the gorillas so a trekker can easily differentiate the tow when they tend to come across them in the forests. Gorilla trekking in Africa is one of the most dominating tourism activities that tourist have got involved in over recent years. The activity involves tourists finding the gorillas in their natural habitat with the help of a tour guide or a park ranger who is well conversant with the place, on meeting the gorillas, you are able to spend time with the gorillas studying them understanding their daily lives which is an interesting activity. The activity is very safe because the gorillas are habituated meaning they are accustomed to human presence. 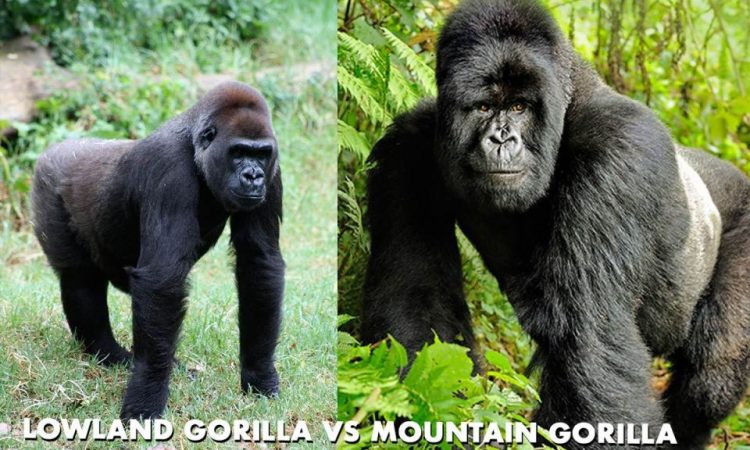 During gorilla trekking and habituation, you will have a chance to come across different gorilla types depending on the country you go for gorilla trekking or habituation. In east Africa that is Uganda and Rwanda you will find the mountain gorillas and in Congo, you will find the lowland gorillas but although the two are classified under the eastern gorillas, they are different gorillas if studied and came across because of the different differences as explained below;

The mountain gorillas in Africa are endangered and therefore there are different practices that are being carried out to ensure that the gorillas are conserved.

The mountain and the eastern lowland gorillas although they are from the same species, have different characteristics that differ from one another.

The mountain gorillas have thick long fur as compared to that of an eastern lowland gorilla, the fur is dark black for that of the mountain gorillas. A fully adult male has white fur on their backs which come as a result of the old age which is sometimes seen as silver hence the name silverback and usually, it is the silverback that fights for dominance of the gorilla family this can be seen on how gorilla families work while in their natural habitats. 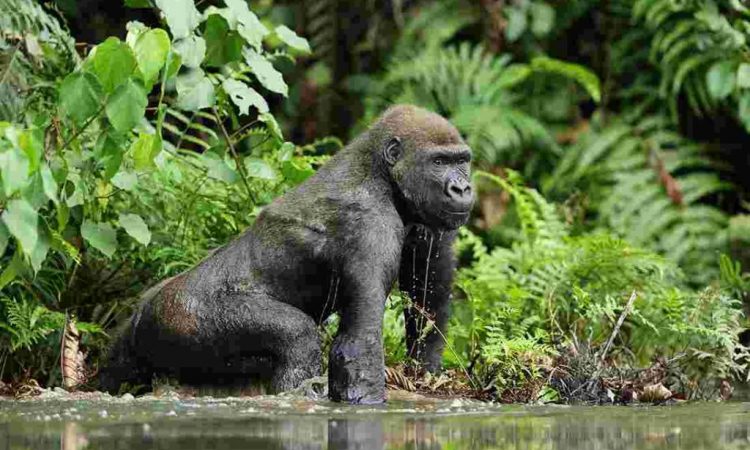 On the other hand, the mountain gorillas are found within the Albertine rift within an altitude of 2200 metres to 4300 metres which is quite higher than that of the Eastern lowland mountain. The mountain gorillas are often found in forests that are cold, misty and most especially cloudy. These gorillas can be found on the slopes of the different virunga mountains but high populations are usually found on Mount Bisoke, Mount Karisimbi and Mount Mikeno which can be seen during gorilla trekking in Congo and gorilla trekking in Rwanda. Other virunga mountains where the species can be found include Mount Muhabura, Mount sabyinyo and Mount Gahinga. These mountains can be found in three different national parks; Virunga National Park, Mgahinga National Park and Volcanoes national park.

Social Structure of the Gorillas (Lowland Gorillas vs Mountain Gorillas)

When mountain gorillas are stressed or upset, they emit a strong odor from their armpits which acts as a signal for their stress and by this it is usually seen that during that period, the mountain gorilla is usually aggressive towards one another they tend to start fights with other members of the groups/ gorilla families, they isolate themselves to feel better which is a trait that is usually seen among humans.

However nothing has been recorded yet among the Eastern lowland gorillas in regards to their reaction under stress and how they resolve it if you are interested in knowing more about the gorilla families you can visit the Congo gorilla families and the Rwanda gorilla tours where  you will understand more about the species and if you are not interested in visiting the two countries you can carry out gorilla trekking in Uganda where you can visit Bwindi impenetrable national park in order to study the different Uganda gorilla families/groups.