Gorilla trekking in Rwanda is one of t he most thrilling adventures one can participate in while on their Rwanda tour. Gorilla trekking has boosted tourism in the country due to the increase of tourist inflows into the country as a result of the need to see the “gentle giants” as they were referred to by Dian Fossey. Dian Fossey was an American primatologist and conservationist who fought to protect and conserve the gorillas in Rwanda during her research in Volcanoes National Park where they can be found in Rwanda. She has become a pillar in the growth of the Gorilla trekking activity in Rwanda. 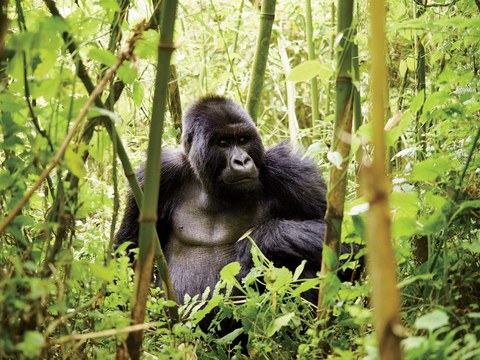 Volcanoes National  Park that is famous for a number of reasons including the Virunga Mountains in Rwanda tourists can see five of the eight Virunga Mountains namely; Karisimbi, Gahinga, Bisoke, Muhabura, and Sabyinyo which offer magnificent views and excellent spots for bird watching with a number of bird species including the following the Archer’s ground robin, red-faced woodland warbler, Ruwenzori double collared sunbird, collared Apalis, Ruwenzori turaco, handsome francolin, strange weaver and many others.

The mountains are also home to a number of animal species, for example, the bushbucks, warthogs, spotted hyena, elephants although rare to find but if the tourist is lucky, they can be seen during the Virunga mountains hike. They are also home to the endangered Rwanda gorillas which can be found in the park on the different slopes of the mountains, these gorillas are divided into different gorilla groups just like humans, they also have different families which are heading by the head of the family who is usually a silverback.

How to Obtain a Gorilla Trekking Permit in Rwanda?

Gorilla Trekking permits in Rwanda can be obtained from different trusted tour operators or agents from the different tour companies in Rwanda. Alternatively, tourists can also book a permit through the Rwanda Development Board which happens to be the tourism board of Rwanda, by visiting its website. The cost of a gorilla permit for every person in Rwanda regardless whether they are citizens or foreigners is 1500USD which is more expensive than that of the price of gorillas in Uganda which is 600 USD and will be USD 700 starting July 2020.

Where to find Mountain Gorillas in Rwanda.

Different Rwanda mountain gorilla families can be found along the slopes of the different Virunga mountains in Rwanda. These are usually found in the bamboo trees of the mountains because the trees are a source of food to the gorillas and also shelter. These can be found on the different mountains like mount Sabyinyo. The dormant mountain is among the most interesting mountains to hike while carrying out gorilla trekking in Rwanda in order to see the Sabyinyo gorilla family.

At the peak of Sabyinyo mountain, the tourist is believed to be in three countries i.e. Uganda, Rwanda and the Democratic Republic of Congo at the same time which is interesting about gorilla trekking the Sabyinyo Gorilla Group is the fact that it has the heaviest and the largest silverback Guhonda in the whole of the park who can be seen when they participate in the activity.

Mount Karisimbi is one of the famous mountains in the Virunga mountains where Dian Fossey established her gorilla research station known as the Karisoke research centre where she used to protect the gorillas from poachers. The area has also got the gorilla cemetery where gorillas that were killed by poachers were buried by Dian Fossey and also the graveyard of Dian Fossey a primatologist who protected mountains gorillas in Rwanda and because of her efforts,  gorilla trekking can be carried out which is able to generate income. The trek to Dian Fossey Grave is another activity that travellers love.

The mountain is a home to the Amahoro gorilla family, karisimbi gorilla group and the Susa gorilla family which are interesting gorilla groups for example the Amahoro group, the Susa gorilla group featured in the gorilla’s in the mist a film that was based o the life of Dian Fossey in Africa Rwanda to be certain where she fought hard to protect the gorillas from poaching by the locals, Amahoro group which is the most peaceful group in the park and the karisimbi gorilla group which  split from the Susa group after family disputes between the two silver backs of the original Susa group.

Mountain Bisoke is another mountain the Virunga mountain ranges where gorilla trekking can be carried out on the slopes of mountain Bisoke where the Ugenda gorilla family which is an interesting gorilla family because of its mobile nature which crossed and goes to Rwanda and Ugenda in search of food. Other gorilla groups that can be found on the mountains Gahinga, Muhabura include the Agashya, Hirwa, kwitonda, Umubano, Titus and Bwenge gorilla families all of which once trekked they offer a one in a lifetime experience.

Gorilla trekking in Rwanda is carried out in Volcanoes National Park which involves hiking the Virunga mountains in search for the mountain gorillas. Before the activity, tourists should present their gorilla trekking permits at the reception and after they are verified, pre-briefing is carried out at the reception of the park that is Kinigi, where tourists will be briefed through the whole journey of hiking the mountains in order to get to the gorillas and telling them what to do when they come into contact with the gorillas and so on.

What to wear when going for Gorilla Trekking

Tourists carrying out gorilla trekking are supposed to put in mind that the activity involves hiking the Virunga Mountains in order to see the mountain gorillas this means tourists should have protective gear to aid in their smooth gorilla trekking experience. The following are the items that should not miss in the back pack of a tourist interested in gorilla trekking:

Other items that they can include in their backpack include; insect repellents, a camera to take pictures but tourists should not use flash while taking pictures of the gorillas, drinking water, an energy drink because the hike can be exhausting, binoculars because there are many bird species which can be found in the bamboo trees where the gorillas are usually found.

Gorilla trekking is a very safe activity that tourists should enjoy and have no fear participating in because of the well trained tour guides and rangers that accompany the tourists to ensure that they are safe during the contact with the gorillas the ranger is equipped with a firearm which can scare away animals in case of trying to attack them however this has never happened in Rwanda which makes it a really safe environment for gorilla trekking.

Before the beginning of the gorilla trekking activity, tourists are briefed on the expectations during gorilla trekking, what to encounter on the way which enables them to have an insight on what can happen and the necessary measures to combat them. A guide is equipped with a first aid kit box which can be useful in case a tourist gets an accident during gorilla trekking for instance when they are scratched by nettles and so on.