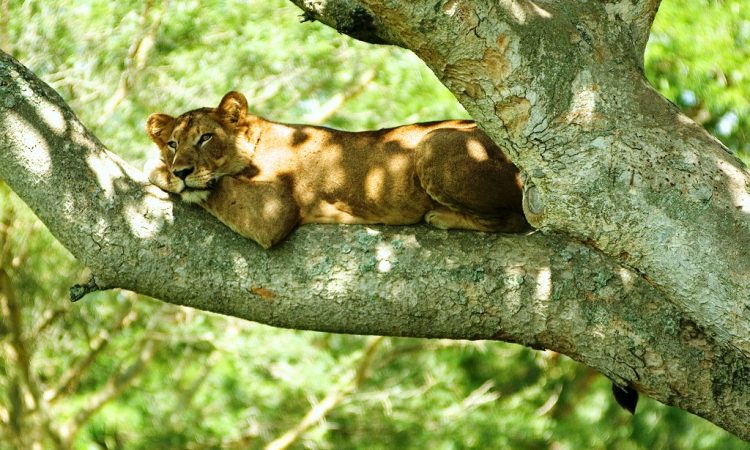 Birding is quite an interesting activity in Queen Elizabeth National Park that can be carried out to ensure you have an amazing experience during your Uganda safaris. The park is home to over 350 bird species that can be seen in the different sectors of the park for example; Kasenyi Area, Mweya peninsula, Ishasha sector among other different areas in the park.

One of the most rewarding human-wildlife encounters in the park is during the lion tracking experience. It should be noted that Queen Elizabeth National Park is home to the Tree climbing lions which can be seen in the Ishasha sector. It is quite unusual for lions to climb trees but in the Ishasha sector you will get to see a number of them and it is believed that the lions climb the trees running away from the scorching sun o the ground and also as a way of locating prey and keeping an eye on the prey as they get closer to the lions where they can easily be caught in other words tree climbing is a strategic plan for the lions to catch prey.

The lion tracking experience is carried out early morning and in the late afternoon whereby you will accompany a team of researchers to get to a given pride of lions in order to know more about the carnivores. With the help of radio collars tracking the lions will be quite easy and at the end of your lion’s experience. You will be able to distinguish between a male and female, their co-existence with one another, their territorial hierarchy among other findings making the lion tracking experience an outstanding activity in Queen Elizabeth National Park.

Chimpanzee trekking is among the activities in Queen Elizabeth national park which can be carried out in kyambura gorge.  Located in the eastern part of the park, the gorge is famous for its primate species which is the reason why it is called the valley of apes because of the different primate species that can be seen when you visit it and these include; red tailed monkeys, red Colobus monkeys olive baboons, white colobus monkeys, and the chimpanzees.

trekking involves tracking the habituated chimpanzees in the area where you will get to understand more about the primates in the natural habitats. In the kyambura gorge, the chimpanzees are most dominating primate species in the Kyambura gorge and you will get to understand their feeding patterns, grooming patterns by observing their behavior during the one hour they give you to spend time with the primates in order to get to know more about the primates.

Another activity that can be carried out in Queen Elizabeth national park is the boat cruise where tourists will have unmatched experiences that will ensure you have a wonderful time in the park because of the exceptional views and a number of attractions that can be seen.

Along the Kazinga channel adjoining lake George and Edward you will see a number of animal species like; buffalos, elephants, the Uganda Kobs, buffaloes, hippopotamus, a number of reptiles and amphibian species like the Nile lizards, Nile crocodiles, you will also get to see a number of water birds like great cormorant, little grebe, northern lapwing, red-necked grebe, wandering albatross, pied king fisher’s to make your experience in the park memorable.

Nature walks in the park are some of the activities in Queen Elizabeth National Park in order to have amazing experiences during your Uganda safaris. Nature walks in the park can be carried out in the Maramagambo forest where you will be accompanied by a ranger and guide in order to have a safe activity. In the forest you will see a number of wildlife species like the primate species for instance L’hoest’s monkeys, Mona monkey, red tailed monkeys, vervet monkey black and white colobus monkeys, red tailed monkeys and many more which will make your experience in the park memorable and the beautiful sceneries of the two lakes that can be seen along the borders of the forest will offer beautiful scenic views and cool breezes.