Gorilla Trekking attire in Rwanda is the different clothes and the gadgets that a traveler must wear to have a successful gorilla trekking safari. Gorilla trekking in Rwanda is among the different activities among the Rwanda tour packages that tourist can participate in for memorable Rwanda safaris. Gorilla trekking in Rwanda will offer amazing experiences during your Rwanda Safari. There a re a number of activities that can be carried out in Rwanda for memorable safaris and these include, the Rwanda cultural tours, Rwanda genocide tour, golden monkey trekking, Virunga mountains hike, Birding in Rwanda, which are among the Rwanda tourism packages that tourists can find interesting and memorable during  the different safaris in Rwanda, you will get to hike the different virunga mountains in Volcanoes National Park in order to access the habituated Rwanda gorilla families and these include Mount Muhabura, Mount Gahinga, Mount Karisimbi, Mount Bisoke, and Mount Sabyinyo in order to access the families. 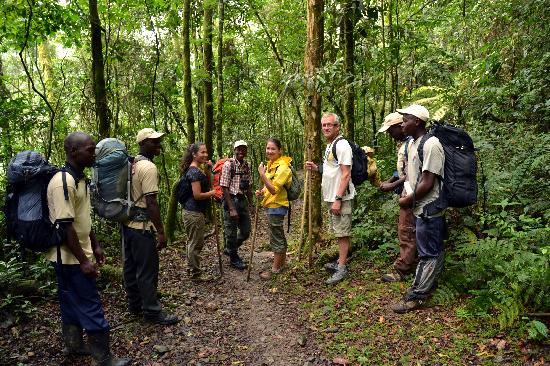 Gorilla trekking in Rwanda is such a rewarding activity where you will get to see a number of attractions in the park as you carry out the virunga mountains hike to get to the gorilla families. Some of the attractions that can be seen in the park include; the different bird species like long-crested eagle handsome Francolin, Rwenzori Batis Dusky turtle love, paradise flycatcher, archer’s ground robin, African Rwenzori, double collared sunbird, marsh harrier, Ruwenzori turaco, common moorhen Ruwenzori nightjar, grey throated tit, the dusky crimson wing, red-faced woodland warbler, the different primate species that can be seen in the park include Mona Monkey, Vervet Monkey, Black and White Colobus monkey, silver monkey, Dent’s Monkey, silver monkey, golden monkeys, you will also get to see Dian Fossey’s grave,  Musanze Caves, the twin lakes of Burera and Ruhondo, extraordinary views of lake kivu among other views and attractions in the park.

In order for tourist to have an amazing time in the park, they should have the right outfit for them to have a comfortable activity in volcanoes national park.

WHAT TO WEAR DURING GORILLA TREKKING IN RWANDA

Gardening gloves should also be considered in  the Gorilla Trekking attire in Rwanda during for safe activity in the park. gardening gloves will ensure that you are protected from nettles and branches that can make the activity unbearable, it should also be noted that some nettles can be poisonous which can cause irritation to the skin.

The raincoat will ensure that you have an amazing activity in the park for instance when you carry out gorilla trekking in Rwanda, you will get to have comfortable activity during gorilla trekking activity in volcanoes national park during the wet season in the months of mid-February to May and from mid-September to mid-December. Other outfits that can be seen in the park include long sleeved shirts and trousers to avoid being pricked by nettles and scratched by branches.

Other necessities that can be carried during gorilla trekking in Rwanda, include; Binoculars which will ensure that you get to see a number of bird species like; paradise flycatcher, archer’s ground robin, African Rwenzori, double collared sunbird, marsh harrier, Ruwenzori turaco, common moorhen Ruwenzori night jar, grey throated tit, the dusky crimson wing Snacks to ensure that you have an amazing time in the park. You should also not forget to park a camera to take memorable pictures of the primates in the park for memorable safaris in volcanoes national park. You should also carry insect repellent to avoid insect bites which will spread diseases like malaria among other diseases.