Semuliki National Park is located in Bundibugyo district in western Uganda. It is known as the true birders’ haven due to wide range availability of the bird species that can be sighted with in this park. It started as Semuliki Forest Reserve in 1932 and later was upgraded into Semuliki National Park in 1993. This park covers 220 km² with an altitude of 670-760m above sea level.  Semuliki National Park is one of the newest national parks in Uganda, made known by the Sempaya Hot Springs. The water in the sempaya hot spring boils to the boiling point over 100°C and the visitors can test it by putting in raw eggs which will be hard-boiled after ten minutes. 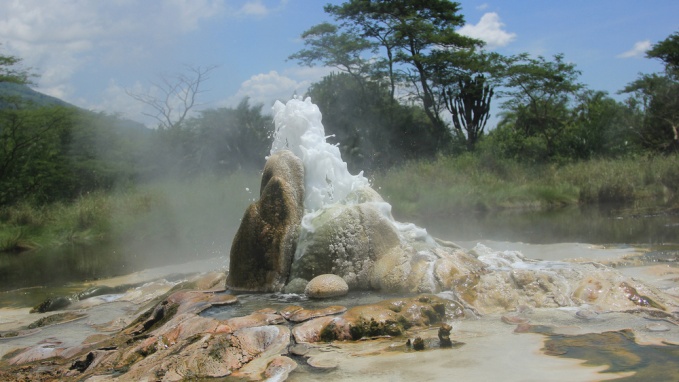 In addition to the Sempaya hot springs, the park has several attractions ranging from primates like chimpanzees, mammals such as elephants, De Brazza’s monkey, Red-tailed monkey’s, pygmy antelope, flora and fauna and a wide range of bird species as explained below;

Semuliki National park has got several activities taking place ranging from birding, Cultural encounters, Hiking in River Semuliki, nature walks, watching boiling water in sempaya hot spring among others that will attract the attention of the visitors as explained below

Boat cruise: In Semuliki national park, this activity is carried out on Lake Albert and River Semuliki and in the process, some water birds like the rare Shoebill storks, Abyssinian ground hornbills, red-throated bee-eaters, African Fish eagles and Kingfishers are seen. Also, some wildlife such as Hippos are seen in Lake Albert.

Nocturnal Game Drives: This activity is done at night with the help of guide rangers and sport lights. Night game drive is a rare activity which enables the visitors to see the animals which were not seen during the day including carnivores

Hiking and nature walk: This activity involves the three trails which include; the Kirumia trail, the sempaya Nature trail, and the Red monkey Trail.

Note: don’t test this water with any of your body parts because it will burn you severely.

Cultural encounters: There are four distinct ethnic groups who live near the park and all these groups can be visited by the visitors during the cultural encounters. These groups include; the Batuku cattle keepers who reside in the open plains, the Batwa pygmies who are hunter-gatherers and they live on the edge of the forest, the Bakonjo who reside on the mountain slopes and they are best known for cultivation of the slopes and Bwamba farmers who reside on the base of the Rwenzori and their major activity is farming.

Batwa experience: This activity is also done during cultural encounters. In this experience, visitors get to know the lifestyle of the Batwa’s hunter-gatherer. This group of people always depends on the Semuliki forest for food, shelter, medicine, and tools but currently, they are copying other communities on how to their standards of living like constructing houses for shelter and obtaining the medical facilities from the hospitals. The visitors have to pay some small money for this experience and buy some handcrafts to support the Batwa and to improve their standards of living. You will also enjoy cultural performances with music and dance. This takes place at Ntandi.

Currently, a historical-cultural village is being constructed where Batwa will always demonstrate about their lifestyle in the forest

Come to Semuliki national park and experience the best birding destination in sempaya and Ntandi, Watch the hot spring as you can boil a plantain and an egg, and wind up your tour with the entertainment from the Batwa and the pygmy villages as they demonstrate their culture.