Rwenzori Mountains National Park is home to one of the most beautiful landscapes in the world. Located in the Rwenzori Mountains and nearly 386 square miles in size passing through Bundibugyo, Kabarole, and Kasese districts. The park was named a UNESCO World Heritage Site in 1994 because of its extraordinary natural beauty. The Mountains were first named by Claudius Ptolemy as “the Mountains of the Moon” and alleged that it was the source of great river Nile which was confirmed as truth in 1888 by the great British explorer Henry Morton Stanley when he accidentally sighted the mountain ranges while on an expedition around the shores of Lake George. It was Stanley who gave the mountain ranges the name Rwenzori. The first notable hiker of the mountain was the Duke of Abruzzi, Prince Luigi Amedeo da Savoia of Italy. While forcing his way through the thick forests in 1906, he discovered the mountain in full with its beautiful lakes and the snowcapped peak. The Rwenzori Mountains were formed by faulting making them the Block mountains. This park lies in the south western region along Uganda – Democratic Republic of Congo border. This is yet another National Park in Uganda that adds spice to the Uganda Safari Tours that many travelers engage in. The hike is quite fascinating but as well it is tiresome. 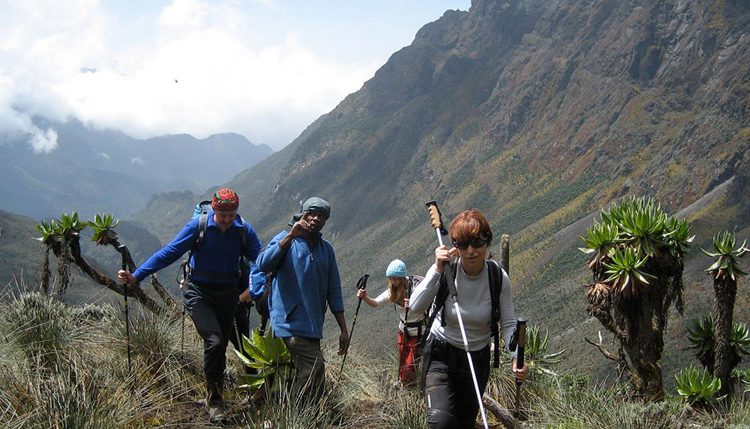 Rwenzori mountains national park is best known of the different attractions ranging from mountain peaks, vegetation, bird species, wildlife, among others as explained below;

Also, the following are the activities taking place on the Rwenzori mountain National Park;

Mountain trekking: During the trekking process by the visitors, the three routes that ascend to the Ruwenzori are used and they include; the kilembe trail, the Nyakalengija- based Rwenzori mountain and the Bukurungu trail as explained below;

Hiking: Most tourists visit Mt. Rwenzori National Park to do Hiking through the superb beautiful sceneries covered by Equatorial snow and vegetation in the area. In Rwenzori national park, shorter hikes are most popular on the kilembe trail which reaches the 4627m. Mt. Lugi Di Savoia is common for Afro-alpine vegetation, heather, and patches of equatorial snow. This gives hikers an opportunity to view the Mt.Stanely.

The Nyakalengija Trails offers tourists a two-day hike to Lake Mahoma in the bamboo forest and finally, the Kazingo trail offers tourists a whole day traverse opportunity to Hike the north Rwenzori ridge that is located between Fort Portal plateau and Bundibugyo town in Semuliki valley on the western part of the mountain Rwenzori. During the hiking, visitors also enjoy day hikes through the forests at the foothills and some activities like fishing with your hands in streams. Most casual hikers will consider a 3-day ascent to Lake Kopello Overlook a more-than-adequate Rwenzori experience. a

Mountain climbing: Mount Rwenzori is a block mountain and it has 6 mountain peaks which can be climbed by the visitors. The most beautiful sceneries on the mountain Rwenzori has forced most visitors to tour it. Mountain Rwenzori is covered in different types of vegetation and climate which will leave you super excited as you ascend its heights. Climbing mount Rwenzori feels like climbing into heaven. So come and experience nature at the most. The highest and the most popular peak is 5109M above the sea and it is found on Mt. Stanley’s Margherita peak the roof of the Rwenzori.

Note: The summiting on Mt.Stanely, baker, and Speke is a physically demanding activity which is frequently in bad weather, and requires the specialist equipment and technical experience. It is a minimum seven day move to ascend and reach the top of Mount Stanley. Keen mountaineers can continue up the Butagu Valley from Mount Baker Base Camp to a Mount Stanley Base Camp on Scott Elliot Pass prior to ascending Mount Stanley.

Nature walks and birding: The forest found in the contours of the National park harbors several species of birds and other nature walks which can be visited from the Kilembe trailhead and the Nyakalengija Trailhead. The birds which are easily accessed in this region are; Rwenzori double collared sunbird, Rwenzori nightjar, Rwenzori batis, handsome francolin, strange weavers, Archer’s robin-chat, Rwenzori turaco and many birds species. Also, other mammals are also observed such as the Rwenzori Colobus monkey, the three Red horned chameleon, vervet monkeys, squirrels among others that will leave you happy. During the nature walks, the tourist moves up to Lake Mahooma and Buraro chimp forest; through the communities of Kichamba to the Karangura ridge; and to the Bundibugyo area through Bwamba pass. The communities of Ruboni and Turaco View also offer guided forest walks outside the park

Cultural exchange:  Visitors have plenty of opportunities to witness the locals at the foothills of the mountain of the moon carrying out their cultural lifestyles and activities like cultural dances and if you are lucky, you might even get some lessons on drumming and dancing. Also, visit the Ruboni village where it is believed that forefathers of the mountains of the moon reside. The Bulemba-Ihandiro Cultural Trail is also impressive to watch, the local Bakonzo culture will make your Uganda tour awesome as you visit the Bat Valley– a holy place for the Bakonzo, and crosses the River Kamusonge. There is also a visit to the traditional healer who explains how he uses his powers to cure the sick. Visitors can also visit the neighboring villages of Ruboni (with Ruboni Community Camp) or Mihunga (with Rwenzori Turaco View) for a cultural tour including dance performances and the chance to buy local handicrafts.

Come and experience the most exciting hike of your life as you climb on the top of Rwenzori peaks, as the mystical park boasts breath-taking waterfalls, high glaciers, the valley of nine lakes, a variety of flora and fauna such as; giant groundsel, giant lobelia and six meters high heathers covered with moss that occupy the mountain’s peak will make your trip to this national park memorably awesome.