Mount Elgon National Park is the epitome of adventure tourism among the different Uganda National Parks. The park is located in the Eastern part of Uganda in the district of Mbale in Uganda, and it is characterised by a number of relief features that make tours to this park interesting and worth the hustle. Some of the notable features include Mountain Elgon which is an extinct shield volcano which is the centre of most of the activities that take place within the park which may include: cycling, hiking and many more. 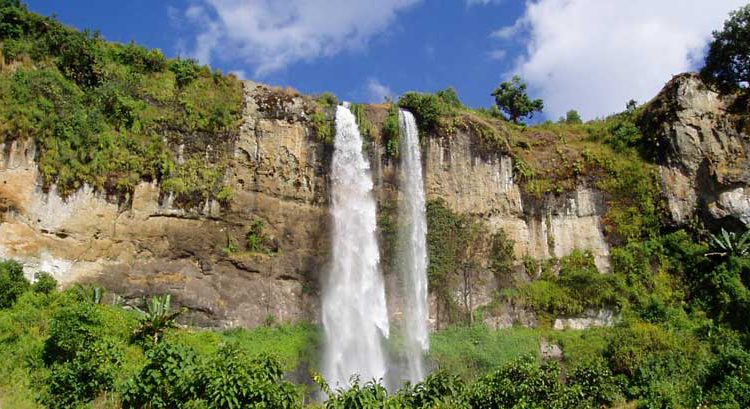 Mount Elgon national park has a number of tourist attractions for instance over 200 bird species which are located within the dense vegetation of the mountain. Animal species, for example, the like Defassa waterbuck, Elephants, Oribi, Bushbucks, Buffaloes and Spotted Hyena and primate species including the black and white colobus monkeys and many more beyond the park tourists can also see a number of waterfalls, for example, the Sipi Falls which are the most famous which offer magnificent views. The park is also known for the amounts of tea plantations that can be seen along the slopes of mountain Elgon because of its rich fertile soils.

Mountain Elgon: Mt. Elgon is one of the attractions a tourist on a mountain Elgon National Park will get to see while on their mountain Elgon national park tour, the mountain is characterised by  a variety of plant-like Ardisiandra wettsteinii, Carduus afromontanus, Echinops hoehnelii, Ranunculus keniensis, and Romulea keniensis which are some of the rare plant species that can be seen on the different slopes of the mountain  and bird species like the endangered Lammergeyer and many more, vegetation zones  like olive Olea hochstetteri and Aningueria adolfi-friedericii wet montane forest and many others which can be ideal for nature-based tourists to visit and see

Animal species: For a tourist interested in relief  and wildlife then Mount Elgon national park is the park to be because it will give you a taste of the landscape and a number of wild animals that can be seen in the dense vegetation of the park especially in the forest, for instance, the tourists can see animal species like; mammals like Defassa waterbuck, Elephants, Oribi, Bushbucks, Buffaloes and Spotted Hyena, also primate species can also be seen during the hikes on the mountain primate species like the  black-and-white monkeys, Colobus monkeys can also enhance the tourist experience while on their Mount Elgon national park tour.

Caves: There are numerous caves that can be seen while tourists visit mount Elgon national park these were formed as a result of mountain eruptions and landslides and in the recent years, they were used as shelter for the locals and also their domestic animals these were also used as shed  for the animals however with the frequent landslides, some of the caves were abandoned by the people. The caves were formed as a result of natural disasters which in the end led to the formation of beautiful caves that are interesting to look at.

Today tourists can visit the caves like Kapkwai Cave, which can be found near the Forest Exploration Centre and the Khauka Cave which is found on the Wanale Ridge some of the interesting attractions in the park. In some of the caves, there has been the establishment of campsites which are used as accommodation facilities for tourists interested in carrying out overnight activities while in the park for instance the hunters cave has a campsite for tourists this helps enables ease to carry out activities within the park. Other caves that are used as campsites include Siyo Cave that offers a magnificent view of the hot springs Mude Cave and Tutum Cave.

Jackson’s pool: For nature lovers interested in relaxing and leisure they can take a dip in the natural pool called Jackson’s pool the pool has shallow waters which are found at Jackson’s peak another feature hikers on their mount Elgon national park tour will enjoy to seeing these features were named after the first European to climb the mountain Fredrick Jackson in 1889. Traditionally, the peak has significance to the locals and it is believed it is the place where they can talk to their ancestors.

Mount Elgon peaks: The mountain has many peaks the tourists can be climbed to fulfil there hiking adventures and through the hikes, they can watch different vegetation zones, plant species, bird species and many more. The peaks that can be climbed/ hiked include the tallest one of them called Wagagi, followed by Sudek, Koitobos, Mubiyi, and Masaba.

Hiking: Hiking in the park is one of the most rewarding activities in the park because of the nature of the terrain; the presence of trail heads makes it easy for tourists to hike up the peaks however the presence of trails doesn’t mean that it is easy to hike. Tourists on different trails experience different challenges while hiking for instance when tourists hike using the Sasa trail they will encounter steep slopes however it’s the shortest route to the peaks to the taking only four days. When tourists use the Sipi trail they will take a maximum of six days to reach the peaks, which starts from the forest exploration centre at Kapkwai – tutum cave.

Birding: Birding in Mt Elgon national park will give you the tourists on their mount Elgon national park tour to see different bird species like the endemic species, migratory and other bird species all in the park. The common trail where birding can be rewarding is the Kapkwai forest exploration centre where a number of bird species can be seen while on the trail. The trail goes up to Chebonet river which offers cool breeze and also here tourists will see bird species like White-chinned Prinia, Luhders and Doherty’s Bush-shrikes, Chubb’s Cisticola, African Goshawk, African Blue Flycatcher and Baglafetcht weaver.

Abseiling: Tourists can also participate in the thrilling activity of Abseiling on Sipi falls which involves going down a cliff/ rock by the use of a rope that is tied around the waist to the bottom of the falls which is quite an adventurous down the falls.

Sportfishing: Sportfishing can be carried out at the bottom of Sipi falls where tourists can carry out the activity and for them to carry out sport fishing, they should first obtain a permit from the Sipi lodge and they are good to go.

Nature and Hiking walks: Tourists can engage in different nature and hiking walks where a number of attractions can be seen within and outside the park for example inside the park vegetation zones can be seen along the slopes of Mount Elgon and outside the park, tourists will have a chance to see different relief features like the Sipi falls, Budari and Mudange cliffs all of which offer magnificent views. At the sipi falls guides will take the tourists on day walks where tourists will be able to see the Karamajong region and Sebei region.

Water Falls: There are a variety of waterfalls a tourist on their national parks tours visiting Mount Elgon national park will visit for example the Wanale, chebonet, Bulago and Sisyi which offer a beautiful appearance in the region. The rivers along mountain Elgon plunged over the different cliffs forming the three different waterfalls which combined leading to the formation of the sipi falls. These three different waterfalls include the Simba and Ngasire and which offer breathtaking views once visited

Mountain Biking: Mountain Biking on Mount Elgon is another adventurous activity tourists on their Uganda tour visiting Mount Elgon national park will engage in. The activity is quite interesting because the mountain has a number of biking trails which start from sipi trading centre and end at chema hill in Kapchorwa are able to challenge the tourists while on their expedition. During the activity, tourists can come across different attractions like the waterfalls and many others.

Agro-tourism: Mountain Elgon is famous for coffee plantations which are as a result of the good fertile soils along the slopes of the mountain, the mountain is one of the highest sources of the coffee that is processed in Uganda and the rest is exported to foreign countries. Tourists will visit different coffee plantations and different processing companies here they will be able to harvest coffee by taking part in the process, they will also grind store and wash it which will be an amazing experience to tourists that don’t the process of coffee making. The type of coffee grown along the slopes of mountain Elgon is Arabica coffee.

Tourists on their Mount Elgon tour are assured of top-notch services offered at hotels that they will sleep in while on their tour of the region these accommodation facilities will offer services in line with the preferences of the customers/tourists and some of the services include dining, overnight stays, WI-FI among other services. The facilities can be budget, mid range and luxury as explained below: