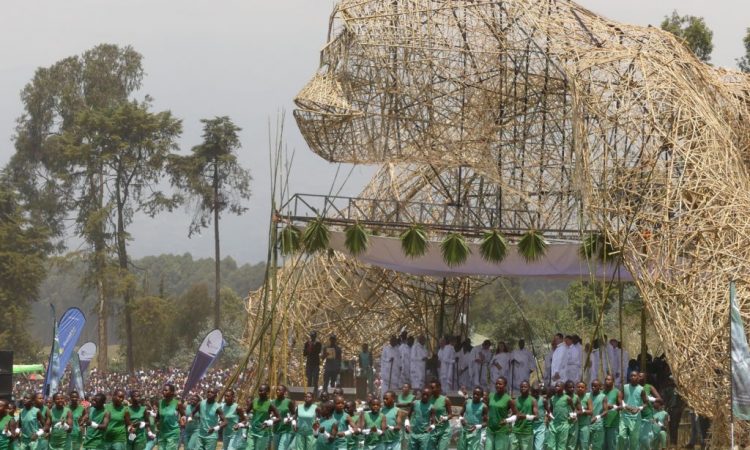 Rwanda’s Volcanoes national park as a destination usually carries out a baby gorilla naming ceremony yearly usually held in September. It has been an ongoing week long ceremony with a series of events including a conference, workshops and is concluded with the highlight of the naming ceremony at the end of the week. The Kwita Izina event was initiated in a way to monitor the gorillas in the park as inspired the Rwandan tradition where the newborn babies were named on a ceremony dubbed “Kwita Izina” which means to give a name in the Kinyarwanda language which is the local language spoken widely in the country.

The Kwita Izina 2019 was held on 6th September and 25 new baby mountain gorillas were named on this ceremony. This ceremony is graced with traditional dancers from school students and the local artists performing the Rwandan cultural dances for the thousands of visitors from all over the world who have graced the function with their presence. The function has been attended by the gorilla lovers, conservationists, rangers, and the people of the local community, international celebrities and dignitaries also the Rwandan president H.E Paul Kagame attends this ceremony yearly. Over 280 baby gorillas have been named on this ceremony since the first one in 2005.

A few of the baby gorilla names that were given in the different years of the Kwita Izina include;

The Kwita Izina ceremony is always held in the Kinigi town at the foothills of the Virunga Massif. The Virunga Massif in the 1980s had a population of about 242 individual gorillas but with the last count in 2018, the region boosts over 600 mountain gorillas estimating the remaining 400 mountain gorillas to be in the Bwindi impenetrable forest of Uganda. Giving names to babies is a thing done everywhere as identification and a wish from the parents on to the children which is the same aim with the Kwita Izina function. Others are named after their ancestors or a past all depending on the name giver. The park rangers did this naming on their own before the kwita izina ceremony was initiated.

The Kwita Izina 2020 baby naming function is going to be a unique one as it fell in the post-COVID-19 times that have seen many changes being implemented to avoid or even stop the spread of the deadly viral disease. Post COVID-19 times dictate maintaining of a social distance from others which is a tricky one in the case of such events but that does not mean the ceremony will not go on. It will go on! The Kwita Izina 2020 will be a virtual ceremony held on the 24th of September 2020. This will be the 16th Edition of the baby gorilla naming ceremony of Rwanda.

How to get to Volcanoes

You may opt to take on 30 minutes to 1-hour domestic flight from Kanombe International airport to Musanze airstrip using a domestic carrier called Akagera Aviation.

Where to stay when in volcanoes

For budget options, you may check out Muhabura hotel, Kinigi guest house and Fatima hotel.

For luxury options, you can look at Bisate lodge, Amakoro songa lodge, one and only house or even the 5 volcanoes gorilla boutique hotel for a fair luxury catch. Get in touch with us to arrange for you a fully inclusive safari as you sit back and enjoy beautiful Rwanda.