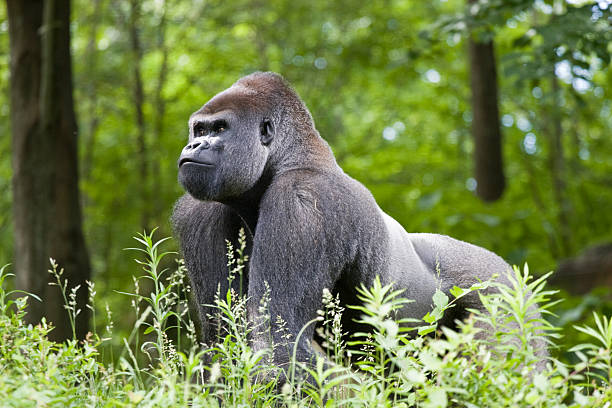 Where to find the gorillas

In east Africa they can be found in the Albertine rift, Virunga Mountains that is mount gahinga, mount muhabura, mount sabyinyo, mount karisimbi, mount bisoke, mount Mikeno and in Bwindi impenetrable national park that is the eastern gorillas and in other parts of Congo, it is important to note the should be noted that gorillas are interested in areas where there is plenty of food and other necessary resources to meet their daily needs. It should be noted that when gorillas are picking an area as a habitat they put much emphasis on the fact that they are able to meet their needs. Since there are different gorilla species, these have specific and different habitats that they live in.

The mountain gorillas are quite big primates with broad chests, large head, long arms with flat noses, their body hair is black in color and when they get older their faces, hands, feet and breasts become bald and the hair on their body in males, the hair on their backs turns grey to white which gives off the silver color hence the  all the eastern gorillas i.e. the mountain gorillas and the eastern lowland gorilla their fur is black in color but in the adult males, their fur on the back is light grey to white in color which gives off the silver color which is the reason why they are called silver backs

The gorillas regardless are herbivores animals that mainly feed on fruits, leaves, tree barks, stems, fruits among other vegetation types but in seasons where fruit is readily available, they prefer fruit to any other food source when fruit is readily available. It is also important to note that although they feed on plants, during food scarcity, they can be seen feeding on small insects like caterpillars, termites, snails, ants larvae and so on.  And because the plants that the gorillas eat contain water, it is hard to see a gorilla getting water from the water source but in case they come in contact with one they can take some. It is believed that a gorilla can consume to up to 18 kilograms of food a day this helps them to maintain their health and become strong making them the giants of the primate species because of their height and weight.

another fact about the mountain gorillas is the fact  that they  are organized species that maintain their numbers in groups also known as families, dominated by a strong silver back who usually goes into power by fighting with other silver backs in the groups and the winner emerges as the ruler for the group/ family. Interesting about the dominant silverback of the group is the fact that he has all the mating rights with all the adult females of the group and in case any of the males of the group mate with the adult females, they are chased away from the group and that’s why some males leave the group and start families of their own. In cases where dominant silver back dies, the gorilla family disperses and migrates to other groups and it is noted that the mother separates from its off springs among the different gorillas which is not the case with the low land gorillas which sticks with its off springs until they get new silver back.

Another interesting fact about mountain gorillas is the fact that the infants of the group can be easily killed when the dominant silver back dies because they are seen as a threat to succession and leadership of the family. The female gorillas in the group, act aggressive among one another because of the need for attention from the dominant silver back and other males in order to get chances of mating and protection from any harm. When the female is ovulating, she will pursue the male by making lip movements and eye contact with them, she can also be seen slapping the ground which acts as an indication that she is ready for mating.

Once the male is enticed, he will show interest by touching the female and thus intercourse and when the females get pregnant, it takes 8.5 months for the female to give birth to an ‘’infant. The infant are sleep in the same nest as the mother and it the duty of the dominant male or the dominant silver back to protect them from any harm. Just like in humans where a mother nurtures, teaches the child basic life skills, protects them from danger, the adult female also does the same in the gorilla family

The mountain gorillas communicate differently depending on the activities and their mood for instance; when a  gorilla locates  food in an area while they are travelling in their different gorilla groups, they can be heard grunting sand barking as a way of drawing the other gorilla attention to the area, during interaction with other gorillas they, scream and roar, when an infant is satisfied after breastfeeding, he can be heard belching and rumbling, once a fight is about to break out, you can hear gorillas hooting, symbolic feeding, rising on their feet throwing vegetation, thumping of chests can be heard and seen as a way to resolve conflict and avoid breaking out in fights among other interesting facts about mountain gorillas that you will get to understand when you participate in gorilla trekking in Africa.