Okapi Wildlife Reserve contains flora of outstanding diversity and provides refuge to numerous endemic and threatened species, including one-sixth of the existing Okapi population. The Reserve protects one-fifth of the Ituri forest, a Pleistocene refuge dominated by dense evergreen « Mbau » and humid semi-evergreen forests, combined with swamp forests that grow alongside the waterways, and clearings called locally « edos » and inselbergs.

With its bio-geographical location, wealth of biotopes and the presence of numerous species that are rare or absent in the adjacent low altitude forests, it is probable that the Ituri forest served, during earlier drier climatic periods, as refuge for the tropical rainforest. To the north of the Reserve, the granite rocky outcrops, provide refuge to a plant species particularly adapted to this microclimate, characterised by numerous endemic species such as the Giant Cycad (Encepholarcus ituriensis).

The Reserve contains 101 mammal species and 376 species of documented birds. The population of the endemic species of Okapi (Okapia johnstoni), a forest giraffe, is estimated at 5,000 individuals. Among the endemic mammals of the forest in the north-east of the DRC identified in the Reserve, are the aquatic genet (Osbornictis piscivora) and the giant genet (Genetta victoriae). The Reserve provides refuge to 17 species of primates (including 13 diurnal and 4 nocturnal), the highest number for an African forest, including 7,500 chimpanzees (Pan troglodytes). 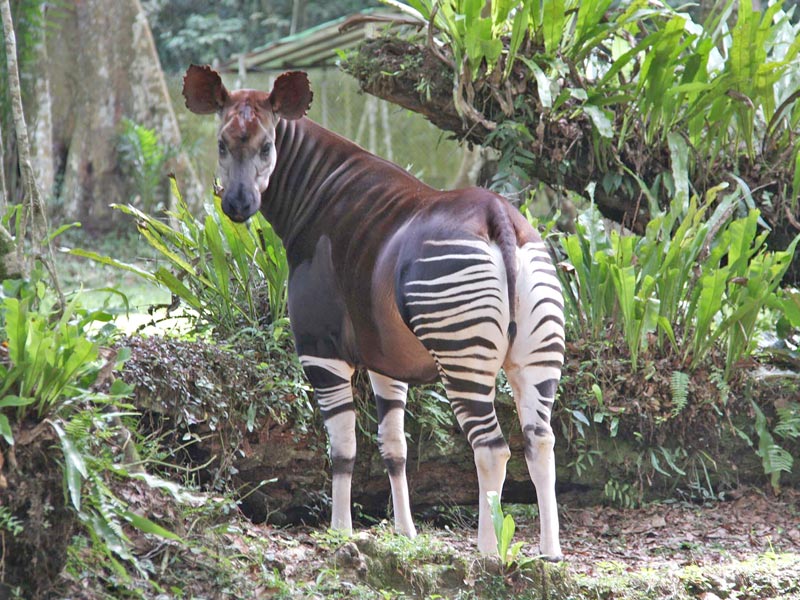 The Reserve also contains one of the most diverse populations of forest ongulates with 14 species, including six types of cephalophus. It also provides refuge to the largest population of forest elephants ((Loxodonta africana cyclotis) still present in eastern DRC, estimated at 7,500 individuals, and it is important for the conservation of other forest species such as the bongo (Tragelaphus eurycerus), the dwarf antelope (Neotragus batesi), the water chevratain (Hyemoschus aquaticus), the forest buffalo (Syncerus caffer nanus) and the giant forest hog (Hylochoerus meinertzhageni). It is also documented as one of the most important protected areas in Africa for the conservation of birds, with the presence of numerous emblematic species such as the Congo Peafowl (Afropavo congensis), as well as numerous endemic species in eastern DRC.

The forests of the Reserve are among the best preserved in the Congo Basin and its area is considered sufficient to maintain its wildlife. The Reserve is part of a larger forestry area, that of Ituri, which remains almost untouched by logging and agricultural activities.

The property is protected under a Wildlife Reserve statute. The Reserve contains a large indigenous population, the Mbuti and Efe pygmies, and the forest ecosystem is essential for both their economic and cultural requirements. A management plan covering three management areas in the Reserve has been proposed.

This includes a fully protected core zone of 282,000 ha comprising 20% of the Reserve where all hunting is prohibited, and an area of 950,000 ha for traditional use, where self-regulated hunting; using traditional methods; is authorized to cover the basic needs of the human population of the Reserve in forest products. Permanent installations and agricultural clearing are authorized in the 18,000 ha development area that comprises a narrow band on each side of the No. 4 national road crossing through the central part of the Reserve, and along a secondary road that links Mambasa to Mungbere, at the eastern border of the property. There are plans to make the whole protected area a national park. A buffer zone of 50 km wide has been defined around the entire Reserve.

The primary management challenges facing this Reserve are immigration control in the development area, prohibition of agricultural encroachment within the 10 km wide strip located along the road, and ensuring of the involvement of the indigenous populations, Mbuti and Efe pygmies, in the management of the Reserve. Another key challenge concerns the control of commercial poaching and artisanal mining. While the Reserve benefits from support from various NGOs and additional funding, it is imperative to obtain human and logistical resources to ensure the effective management of the property and its buffer zone.