Golden Monkey Trekking in Uganda during Covid-19 : Golden monkey trekking in Uganda is carried out in mgahinga national park a park famous for housing the Virunga Mountains and the endangered mountain gorillas in Africa, that can be seen when you take part in gorilla trekking in Uganda. Golden monkey trekking has gained popularity over the years because of the fact the golden monkeys are also listed among the world’s endangered species which has attracted a number of tourists to visit the park to see the species but with the increase in the tourist arrivals in the park there have been a number of standard operating procedures to follow during the covid-19 global pandemic to ensure that you have a safe and memorable Uganda safari. 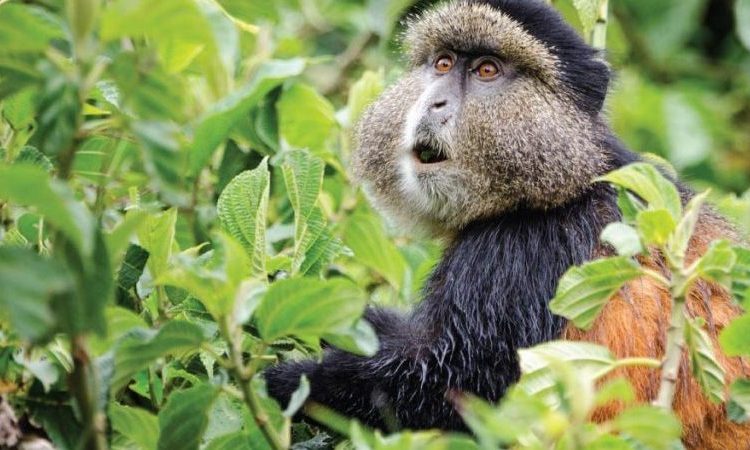 It should be noted that Uganda confirmed her first corona virus case in march 2020 and after this more cases have been confirmed and this has led the country with the help of the ministry of health and the government to put up a number  safety measures that are  being exercised in the country to ensure that the locals are prevented from contracting the virus and the tourists when they visit to take park in a number of activities like chimpanzee trekking in Kibale national park, gorilla trekking in Bwindi impenetrable and most especially golden monkey trekking which is has also ushered in a number of tourists to see the primates.

Golden monkey trekking is carried out along the virunga mountains in Uganda namely mount Muhabura, , mount Gahinga and mount Gahinga which she shared with volcanoes national park in Rwanda and other virunga mountains can be seen in virunga national park. After obtaining your golden monkey trekking permit in Uganda, you’ll make your way to the park where you will undergo a briefing session of the rules and regulations to follow on finishing the session, you will embark on your journey to the primates and along the way you’ll have rewarding views of a number of bird species like the long-crested eagle handsome Francolin, Rwenzori Batis Dusky turtle love, paradise flycatcher, archer’s ground robin, African Rwenzori, double collared sunbird, marsh harrier, Ruwenzori turaco, common moorhen Ruwenzori night jar, grey throated tit, the dusky crimson wing, red-faced woodland warbler primates like mona monkey, black and white colobus monkeys, grey cheeked mangabey,  and you will also get to see other virunga mountains like mount karisimbi, mount Bisoke, moun sabyinyo and mount karisimbi and  when you get to the habituated troops, you will spend an hour with them observing their different behaviour in the park, how they react to human presence, you will take pictures of them to make your activity quite rewarding.

While participating in golden monkey trekking in Uganda during covid-19, it is important to note that there are a number of measures that have been put up by the ministry of health that you should follow to ensure that you are protected against the life threatening virus and also because failure to adhere to the measures, you’ll not be allowed to participate in the activity because you pose a risk to other tourists that take part in the activity. Some of the safety measures you should carry out during golden monkey trekking during covid-19 include the following;