Shoebill Stork Size and Facts : The shoebill, also called the whale head, whale-headed stork, or shoe-billed stork, is a stork-like bird that is quite big. It takes its title from its massive shoe-shaped bill. It has a slightly stork-like overall shape and was originally placed in the order Ciconiiformes with storks based on this morphology. 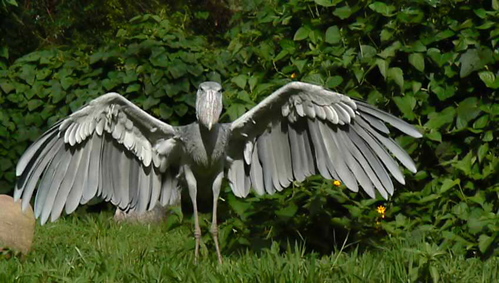 The foot-long bill that resembles a Dutch clog is what distinguishes the aptly called shoebill. Its five inches broad, tan with brown splotches, with sharp edges and a sharp hook on the end. The shoebill’s unique bill helps it to catch big prey such as lungfish, tilapia, eels, and snakes. It will even eat new-born crocodiles and Nile monitor lizards.

These facts cover, among other things, the physical structure, eating habits, behaviors, longevity, movements, and habitats of the uncommon shoebill stork, as detailed in this article.

Shoebills Storks have yellow eyes, grey feathers, white bellies, and a tiny feathered crest on the back of their heads, and may grow to be five feet tall with an eight-foot wingspan. They also have long, slender legs with big feet, which are perfect for walking on the plants in the freshwater marshes and swamps of East Africa, from Ethiopia through South Sudan, Uganda, Rwanda, Kenya, Tanzania and all the way to Zambia.

Mouth: The shoebill stork has a shoe-like shaped mouth (thus the name shoebill), as well as a strong bent beak that allows it to cut animals into manageable pieces for simple digestion.

Foot: The shoebill stork has a lengthy foot that may measure up to 18cm, which is comparable to the size of a human foot.

The height: A adult shoebill stork may reach a height of 4-5 feet while standing on two legs, making it one of the world’s tallest birds.

The population is believed to be between 5,000 and 8,000 people, with the majority living in wetlands in South Sudan, Uganda, the eastern Democratic Republic of the Congo, and Zambia. There is also a viable population in Tanzania’s Malagarasi wetlands. It is categorized as Vulnerable by Birdlife International, with the primary risks being habitat loss, disturbance, and hunting. The Shoebill Stork is one of the endangered bird species  according to the Convention on International Trade in Endangered Species of Wild Fauna and Flora lists the bird (CITES).

Shoebill storks are both nocturnal and aquatic birds, since they like to spend their time near bodies of water and in hideouts. The Shoebill stork lives in areas with water and dense marshes, which provide an excellent hiding spot for them while they hunt for food. Because of the environment that benefits them, shoebill storks are abundant throughout Africa. In Africa, they may be found in a variety of locales, including Uganda, which is home to around 1000 shoebills that can be readily tracked in various areas throughout Uganda during birding, boat cruises, and game drives.

Some of the finest spots to visit while on a vacation are Mabamba Swamp near Lake Victoria, Lake Mburo national park, Queen Elizabeth national park with in the swamp in the Ishasha sector, Semliki wildlife reserve, and Ziwa rhino sanctuary, not to mention Nabajuzi swamp in the Masaka region. In reality, Uganda is a birder’s heaven, with numerous unique and rare bird species found nowhere else in the world.

Other areas to visit shoebills in Africa include Rwanda, Zambia, Sudan, Tanzania, eastern Congo, Cameroon, Botswana, and Kenya, among others, which have wetland areas with enough food for the shoebill stork, good hiding locations from predators, and breeding grounds for the threatened rare shoebill stork, which prefers building their nests in open marshes.

Shoebills attain adulthood between the ages of three and four years, and breeding couples are monogamous. However, these birds are quite solitary in nature, and even mated couples will eat on separate parts of their territory. Breeding pairs construct nests that can be up to eight feet wide on the water or on floating plants. At the end of the rainy season, females deposit an average of two eggs.

Both birds care for the eggs and young as co-parents. Incubating and flipping eggs, as well as chilling them with water brought to the nest in their huge bills, are all part of the job. Hatching takes roughly a month. Chicks are covered in bluish-gray down and have a lighter colored beak. Typically, only one chick survives to fledge.

Shoe bill storks are recognized for relying heavily on water mammals, and many of their prey include different fish species such as lung fish, cat fish, eels, baby crocodiles, and reptiles and amphibians including water snakes, and frogs as long as it fits in its mouth, which is why they prefer inhabiting water logged environments where they use their own unique hunting technology.

Birdwatchers regard this species as one of the top five most desired birds in Africa. They are gentle with humans and do not exhibit any threatening behavior. A bird on its nest was seen by researchers at a close range within 2 meters, 6 feet 7 inches.

Shoebills may remain immobile for hours at a time, so when a helpless lungfish comes up for air, it may not detect this dangerous prehistoric-looking bird looming until it’s too late. The birds use a hunting tactic known as “collapsing,” in which they lunge or fall forward on their victim.