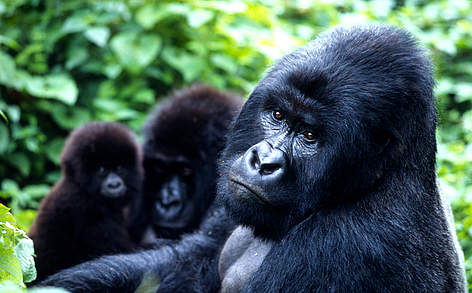 On the other hand, gorilla trekking in Congo will give you the chance to take part in trekking the mountain gorillas as you take part in gorilla trekking in Virunga national park which is also famous for mount Nyiragongo that recently erupted, tourists in Virunga national park can also get to see the mountain gorillas by visiting the Senkwenkwe gorilla orphanage and you can also get to see the western lowland gorillas and the eastern lowland gorillas that have gained popularity in world. The eastern lowland gorillas can be seen in kahuzi biega national park which will give you the chance to understand a number of interesting features of the primates like their habitat, their description which will ensure you have an amazing gorilla trekking experience in Congo.

WHERE TO FIND THE EASTERN LOWLAND GORILLAS

The eastern lowland gorillas in Congo can be found in kahuzi biega national park one of the most memorable national parks in Congo. As you make your way to access the park you can choose to visit Lwiro chimpanzee sanctuary where you can visit a number of orphaned chimpanzees and volunteer to take care of it for a day for an amazing experience. When you get to kahuzi biega national park, you will be struck by the beauty the national park possesses from its two dormant volcanoes kahuzi and biega to a variety of wildlife species like the birds and the primates that can be seen within the green vegetation making it one of the best places to visit the gorillas in Africa.

Once you make your way to the reception area, you will be assigned to a guide who will take you through the briefing session of the rules and the regulations to follow during gorilla trekking In Congo so as to have an amazing experience as you take part in one of the top tourism activities in Congo 2021, With gorilla trekking in Africa during covid-19, you are encouraged to follow the covid-19 safety precautions to ensure that you avoid spreading and contracting the virus to the travellers and the primates when you get in contact with them.

Some of the most rewarding features of the primates you will get to understand include their reproduction, just like humans, eastern lowland gorillas usually give birth to a single infant after the gestation period of 8.5 months and once the adult female gives birth priority of safety and protection is given to the infant and the mother before any other member in the group. You will get to see the female breastfeeding the infant and this usually happens until three years.

Another interesting feature about the eastern lowland gorillas you will get to understand Is their behaviour which is as similar to that of the mountain gorillas because they are highly social and very peaceful.  A gorilla family consists of a dominant silverback who is the overall head of the group and is expected to take care of the gorillas in the group. Interesting about the dominant male is the fact that he has all the mating rights with the adult females of the group and in case any of the males in the group mates with the females, they are banned from the gorilla family.

Because only the dominant silverback has the mating rights with the females, a number of young silverback will live the group and attract some females to establish their own gorilla families. This and more interesting features can be seen when you participate in gorilla trekking in kahuzi biega where you will also have the chance to take pictures and film the gorillas in the wild for an amazing experience in the park. Other rewarding attractions that can be seen include numerous bird species like; the long-crested eagle handsome Francolin, Rwenzori Batis Dusky turtle love, paradise flycatcher, archer’s ground robin, African Rwenzori, double collared sunbird, marsh harrier, Ruwenzori turaco, common moorhen Ruwenzori night jar, grey throated tit, the dusky crimson wing, red-faced woodland warbler for tourists interested in birding. You will also get to see a number of rewarding primate species like black and white colobus monkeys, l’hoest’s monkey, red tailed monkey, silver monkey, grey cheeked Mangabey, red tailed monkey for a memorable safari.