Buhanga Eco park is a small park in the Volcanoes national park and is in a forest that sits on about 31 hectares of land. This place is famous for its scared and spiritual importance for the people living in the area. This place is where the inauguration of the Kings of Yore was carried out. They would undergo rituals of initiation and enthronement for their kingship role in this forest. 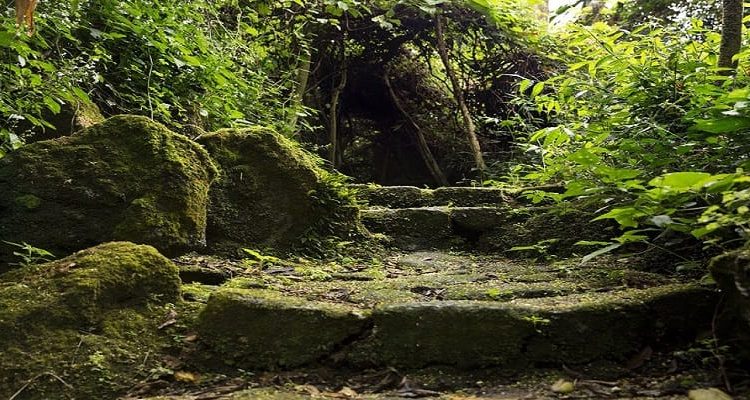 This forest has a rich ecosystem but a visit can be a bit demanding as the terrain is majorly stony and the trees are big and tall with some climbing plants whose roots and branches you will keep jumping over as you make your way in the forest.

This forest is also blessed with a number of butterflies to identify on your nature walk and also a home to a number of birds. The forest look changes with the season of the year and the time of the day that is why it is most advisable to visit in the morning hours and early afternoon if you want to spot a number of birds and enjoy them chirping in the forest topping the sounds of the forest.

While in the forest, you get to feel nature in its most raw state and get to visit the different sectors of the park and every sector has a story to tell majorly on the ceremony of the Kings and the tradition of the Yore people in general. There are a few points to look out for on your visit to the Buhanga Eco Park.

These herbs were meant to cleanse this water before the King took his bath.  Around this ditch is a flower thicket and lava stones. This will be your first stop on your visit to the Buhanga Eco park and then you will continue further to the Dark cave.

The dark cave.  This cave is a huge attraction in this park and is bordered by big boulders and this is where the Kings where wheeled to in a royal carriage all the way from the King’s palace in Nyanza. This royal carriage is also known as “Ingobyi” in the local language and he would make the first stop to take a bath in the water from the spring and it would be mixed with some herbs from a ditch that was known as a fortune giving bath. Immediately after this bath, the King would be wiped and his entire body would be smeared with royal oils and His highness would continue to the conference podium.

The conference podium is where the King would be handed his royal instruments that he was to use when in power and also received blessing and protection from the gods of the forest. After visiting the conference podium, the King would officially receive his title as the “Umwami” of Rwanda which was given to Kings. The advisory council, clan heads, royal sorcerers and the elders of the clan would preside over the ceremony in accordance to the cultural beliefs of the ancient people.

This ceremony was done in a bid to ensure the Kingdom was protected from the external enemies or bad wishers and it also led the kingdom to always win attacks from other territories.

This conference podium is formed from lava rocks that were cut to make a table like look and there are stairs on the edge and the podium is covered by green algae giving the podium a green look. You will further head out to another attraction of the forest the three in one tree.

The three in one tree. This tree is believed to depict the harmony of the Rwanda people. There are three ethnic groups in Rwanda that is the Hutu, the Tutsi and the Twa and were all under the rule of one King. The local name of this tree is the “Inyabutatu” and the three tree species are the Inigabiro, Igihondondo and the Umusando that are intertwined looking like three trees in one.

The place in which this tree sits is also where you will see the Umuvumu tree that is said to be a curse after 30 local men cut it down for firewood but before they could even carry the firewood out of the forest, the tree reformed and these 30 men and their families perished under mysterious circumstances. There is so much history within this park and it welcomes individuals of all ages to visit.

Small dark water spring. You will conclude your visit with a walk down the small dark water spring where the water for the King’s bath was collected. A local chief in 1988 ordered men to clear the spring but all efforts were a failure and the following day the residence of the local chief was surrounded by big snakes for 7 days and the chief and his entire family died on the eighth day.

This spring is one in a million as it overflows during the dry seasons and yet in the wet seasons it is almost dried up. The water of this spring can be collected by the local people for domestic use while others collect the water for blessings. A visit to the Buhanga eco park is open for every individual at a cost of 40 USD for the foreign travellers and is open every day from 8 am to 6 pm so do not miss out to include this visit on your Rwanda safari to the Volcanoes national park.