Are Gorillas Friendly : Gorillas are quite unique primates that have gained popularity over the years with the fact that they are endangered species and because of a number of efforts by different personalities like Dian Fossey who was an American primatologist that worked hard to promote the sustainability of the endangered mountain gorilla species. The gorillas are quite interesting features with different characteristics that can be seen when you participate in gorilla trekking in Africa which will give you the chance to understand more about the different gorilla species in the wild. 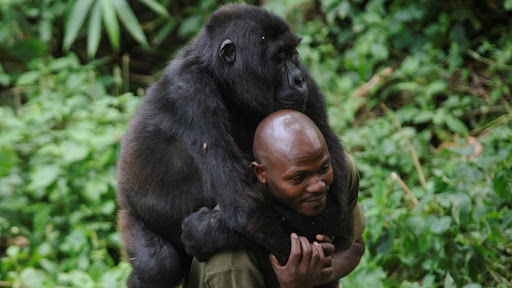 Once you’ve chosen the different parks you’re going to take part in gorilla trekking in Africa from, you will embark on you thrilling activity which will give you the chance to observe a number of rewarding attractions as you make your way to the different habituated gorilla families. Some of the rewarding attractions that can be seen include; the Virunga mountains like mount sabyinyo, mount gahinga, mount karisimbi, mount bisoke and mount muhabura when you participate in gorilla trekking in Uganda and gorilla trekking in Rwanda, you will get to see rewarding views of the twin lakes of Burera and Ruhondo, lake kivu, for bird lovers.

When you get to the habituated gorilla families, you will understand a number of interesting facts about the gorillas like their reproductive system, you will have the chance to see the dominant member of every gorilla family, that has all the mating rights with every adult female which makes the females quite aggressive towards one another among other interesting features of the endangered species. Among the most concerns of the people that participate in gorilla trekking is whether the wild species are friendly and safe to visit during your gorilla trekking experience in Africa.

Habituated gorillas are quiet friendly in a way that they will allow you to be in their territory and observe their behavior in the wild without charging at you this is because they are trained to get accustomed to human presence. During gorilla trekking you will see the infants coming to you climbing your boots without getting worried about the gorillas attacking you. However, while you take part in the activity, you should avoid touching the infants in the group because the silverbacks will see you as a threat and hence attack you. Other different triggers for the gorillas include; unnecessary movements, unnecessary noise, maintaining eye contact with the gorillas which is interpreted as a challenge for a fight with them which can be fatal therefore you should consider paying attention during your briefing session to understand the rules and regulations to follow when you participate in gorilla trekking in Africa to avoid any accidents while you visit the habituated gorilla families.