Camp Kigali is a former Rwandan military base in Kigali, the site of the murder of ten Belgian UN Peacekeepers. These murders were preplanned by Hutu fanatics and were carried out to force the withdrawal of the 450 Belgian soldiers who were part of the UN force. 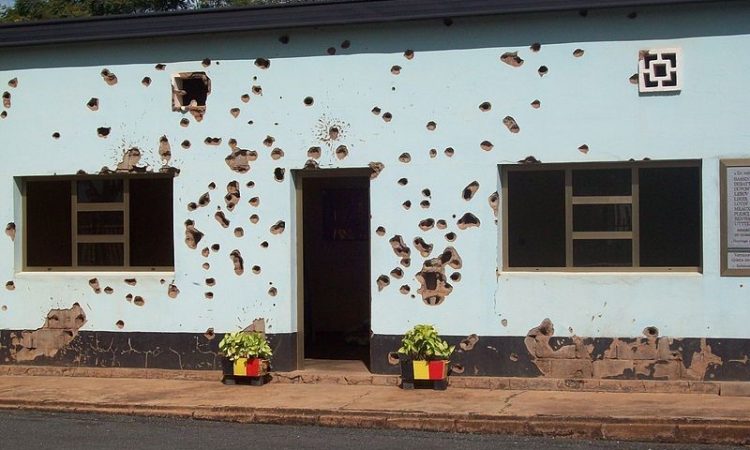 The soldiers had been sent to protect the Rwandan Prime Minister, a hutu who was against the massacre of Tutsis (currently she is considered as a hero), when they were captured disarmed by Hutu militias (presidential guards) and taken to the military base. Once here four of them were immediately killed, the rest barricaded themselves in a room and fought off their attackers for several hours, before being killed and mutilated.

The site is now a simple but moving memorial to the soldiers. Bullet holes and blast marks from grenades remain as reminders of their terrible fate. Their deaths accelerated the process of international withdrawal from Rwanda, and fatally weakened the UN’s response to the growing catastrophe.

The 10 stone columns you find here mark the spot where all 10 Belgian UN peacekeepers were murdered on the first day of the genocide.

Each stone column represents one of the soldiers and the horizontal cuts in it represent the soldier’s age. The bullet-sprayed building in which the soldiers died now houses a small exhibition on the genocide.