Canopy walk is an activity in East Africa that can only be found in Nyungwe National Park Rwanda in East Africa and is an amazing activity that will leave you fascinated. A park focused to ensuring visitor satisfaction with its rich biodiversity of over 1000 plant species, 120 butterfly species,  85 animal species and a variety of activities which may include birding, chimpanzee trekking, camping, hiking, research and many more. 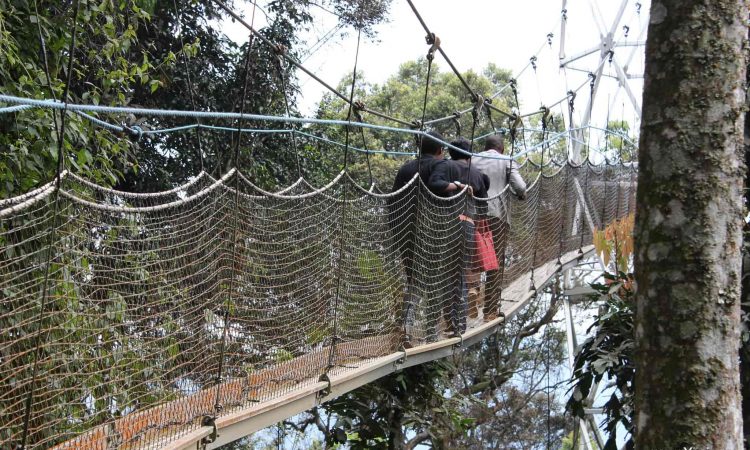 The activity was introduced to boost tourism in the Park together with other tourism activities like chimpanzee tracking, birding, hiking, camping and many more. The idea to set up the walkway was brought up in 2008 and with the support of  U.S.A.I.D construction works started in 2010 under a non- governmental organisation Green Heart. The Canopy walkway was then launched in 2017 by Monique Nsazabaganwa the Minister of trade and industry together with the Chief Operating Officer at Rwanda Development Board Claire Akamanzi.

The canopy walk is divided among three stretches and each of the sections has a varying length, the shortest stretch at 25 metres, followed by 45 metres and the longest at 90 metres regardless of where the tourist is on the canopy walkway, the scenery remains beautiful and satisfying.

Since the canopy walkway is the only one in the East African region, it has therefore improved and boosted tourism in Nyungwe National Park and Rwanda at large with the increased tourism inflows to experience the one of a kind adventure since its opening in 2017.

With the increased tourist inflows, many people have searched on how to access Nyungwe National Park to take part in the activity.

How to participate in the Canopy walk.

For tourists who are interested in participating in the Canopy walk in East Africa, the only place is Nyungwe national park, and visitors will access the park by either road or air transport. By road transport, the distance from the capital city-Kigali to the National Park is approximately 190km and it should take them about 5 hours to reach the park if the car is in good condition.

For tourists that are able to afford air transport, Rwandair which is the national carrier offers domestics flights that they can opt for. Tourists can book a flight from Kigali to Kamembe town which is very close to the park and from there road transport means are used to cover the 49.5 km to Nyungwe National Park. It takes approximately 1hour and 10 minutes to reach the park therefore compared to the use of road transport and air transport is fast and easy.

The tourist on reaching the national park should first go through Uwinka Reception Centre which can be accessed through the gates Gisakura which is the western entrance or Katabi which is the Eastern entrance. At both entrances, the tourist is supposed to pay a fee of 60 USD to carry out canopy walk.

At the reception, the tourists that are going to participate in the activity are briefed on what is to be expected of the activity, the equipment to use and so on and a guide is introduced to the group who leads the group to the Igishigishigi trail.

Igishigishigi trail was chosen among all the trails for the canopy walkway because of its ease and the ability for one to reach the walkway in the shortest time. The site for the walkway was selected to be halfway the trail and compared to other trails the Igishigishigi trail was the best fit. The 2.1 km trail starts at Uwinka Visitors Center. On the trail, numerous trees and plant species are noticed moving forward and the Uwinka ridge is also seen. As tourists continue on the trail, the canopy walkway is discovered along the trail. On the trail lichens, mosses, orchids ferns, and other plant species are seen before reaching the Canopy Walkway.

However, there are other trails in Nyungwe National Park that are equally important namely:

Starting Time of the Canopy Walk

At the canopy walkway

At the different sections of the canopy walk way there are varieties of animal species, bird species butterfly species and vegetation cover that can be seen across Nyungwe National Park. For example primates like the different monkey species namely; the white colobus, Angola colobus, red tailed monkey, blue monkey, owl faced monkeys other animal species like the golden cats, duikers,, giraffes, lions, buffalos chimpanzees jumping from tree to tree. Butterfly species, for instance, the graphium- gudunesi, metisella- articolla, zenonia- crasta, charaxes-mafuga among others which offers a breathtaking experience to the tourists that take part in the activity of canopy walk.

At the canopy walkway, there are also other attractions that can be seen for instance Lake Kivu, the thick green vegetation, with other 200 tree species it is evident that the upper canopy is dominated by hardwood trees  which can also be seen while carrying out canopy walks and the different plant species.

What to consider during the Canopy walk

During canopy walk, it is advised to be free from any health complications which can affect the person during hiking to the canopy since it involves using one’s physical strength. People with health complications like heart problems, lung problems that can cause shortness of breath are advised not to participate in the activity.

Equipment to carry for the Canopy Walk

Tourists are advised to carry different items while embarking on their journey for example items like;

For one to participate in the canopy walk, a fee of 60 USD has to be paid to the reception at Uwinka reception center.

NOTE: Nyungwe National Park can offer a variety of tailored products for instance after canopy walk, a tourist can also track chimpanzees on different trails or carry out birding since it takes only two hours. This gives chance to tourists to participate in other activities hence making more memories thus leading to customer satisfaction.

“Visit Nyungwe National Park in Rwanda and get a chance to experience this amazing tour activity that will leave u mesmerized – Canopy Walk.”