Home » Facts about Mount Nyiragongo after the eruption

Facts about Mount Nyiragongo after the eruption

Facts about Mount Nyiragongo after the eruption : After nine years after its last recorded eruption in 2002, mount Nyiragongo in Virunga national park the park famous for gorilla trekking in Congo and the Virunga mountains in Congo like mount Mikeno and a number of activities that tourists interested in taking part in Congo safaris can visit erupted. Mount Nyiragongo Africa’s most active volcano which also had the world’s largest lava lake erupted On May 22, 2021 after years of showing signs of eruption with the increased lava volumes that were rising, the lava was seen flowing north east of Goma and in its path the lava left behind a number of destructions like displacement of people, infrastructure like schools, hospitals and many other disruptions 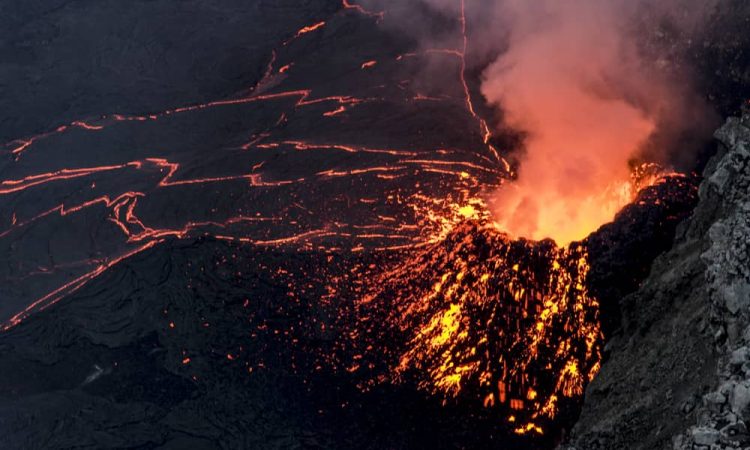 Mount Nyiragongo has erupted over 34 times and with all the times, a number of people have lost their lives due to the fact that the people are usually caught off guard when the eruption happened.  Although the government of Congo had urged a number of locals that were living near the mountain to evacuate because of the increased rising levels of lava in the lava lake, some of the locals did not adhere to the government warnings which led to a number of deaths. 31 people are believed to have died during the eruption which is not as high as the 2002 mount Nyiragongo eruption where about 250 people lost their lives. It should be noted if people had taken the government warning serious then the deaths would have been avoided.

Another heart breaking fact about mount Nyiragongo eruption 2021 is the destruction of a number of infrastructures like schools, hospitals and homes. Before the eruption, people were told to evacuate and a number of Congo locals were seen fleeing to the neighboring Rwanda another interesting spot if you’re interested in visiting the mountain gorillas in the wild, tourists can take part in gorilla trekking in volcanoes national park to have an amazing insight of the behavior of the primates in the wild.

A number of people lost their homes to the lava that was flowing immensely left a number of people homeless without fresh running water, however with the help of  a number of international organizations a number of temporary tents have been set up to act as schools and homes for a number of displaced people that came back after the eruption and also for the case of clean running water, pipes were replaced to help people to access clean water since the pipes were destroyed by the lava and with such efforts, a lot will get back to normal in  Virunga national park and the area around the park.

Disrupted a number of activities

After mount Nyiragongo eruption, a number of activities in Congo like mount Nyiragongo hike gorilla trekking in Virunga national park where tourists interested in gorilla trekking n Africa ca visit to ensure that you spend an hour with the mountain gorillas which are quite different the western lowland gorillas another interesting gorilla species. With gorilla trekking you can get to understand a number of interesting features of the primates like their strength, gorilla strength vs chimpanzees, your will get to get answers to questions like are gorillas friendly, are gorillas dangerous, their diet and many more but after the eruption where lava is no longer a threat, a number of activities like gorilla trekking in kibumba have resumed, visiting  Tchegera island to participate in activities like swimming in the wild as you watch a number of attractions like the different  primates like monkeys swinging from one tree branch to another as you get to see rewarding views of the recently erupted mount Nyiragongo.

For tourists that are interested to watch the mountain that erupted, it’s quite unfortunate that you cannot visit later on hike to the summit to watch the crater that was full of magma because a number of trails to the summit were destroyed by the lava however there’s still hope for tourists interested in mount Nyiragongo hike one of the Virunga mountain in Congo because the mountain has started gaining its activity back with the evidence of lava that has been seen filling the crater and the park is also putting in place hiking trails and trying to put the park back to normal for tourism to take place.