FACTS ABOUT THE SHOE BILL STORK

Facts About Shoe Bill Stork : Did you know that the shoe bill stork is an endangered bird species that can be found in Akagera national park Rwanda?  Yes, this amazing species is one of the most eye catching bird species that can be seen when you participate in birding in Rwanda. On visiting the park, you will get to see them when you participate in the different activities in Akagera national park for an amazing experience in the park where you will get to see the bird species in the marshes of the park. While you visit the park, you will get to understand and get to see and understand the different facts about the shoe bill stork. 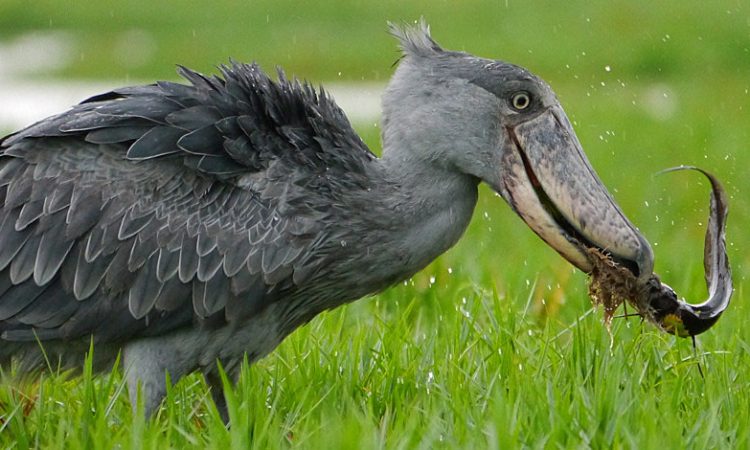 They are aggressive species

The young ones are quite aggressive towards one another and this can be seen when you visit the marshes, the young shoe bill stork can be seen fighting each other because of the need for attention from the mother. However, if they are not seen fighting each other, they can be seen being shy that prefer to be alone and they maintain in their territories. Usually the storks that fight are between the age of two months to one year and the larger dominant offspring will pick fight with almost every young one in the nest, the dominant bird species can also fight with the lesser young ones until they flee from the nest to live on their own.

They are quite brave

The shoe bill stork is quite brave that they can challenge any animal and bird species regardless of the size and might. The marshes are quite dangerous for animals that live in their because the shoe bill stork makes it more dangerous because of their aggressiveness, the bird species can be seen fighting for the slightest irritations like animal species blocking their sight/ view, you can also get to see the shoe bill stork fighting crocodiles which quite interesting to watch and in rare occasions, the crocodiles can be seen avoiding the shoebill stork because of their aggression.

While catching prey, the shoe bill stork can be seen waiting for hours standing in water waiting patiently for weak animals to kill and feast on. The bird species usually feed at night and they can be seen sitting perfectly and still blending in the darkness during the boat cruise on lake Ihema in Akagera national park you will get to see them standing still in the marshes waiting for their prey.

To be different from the different bird species that spend most of their time, the shoe bill stork limits their noise but once they make noise, they can be heard making a sound similar to that of a machine gun which comprises of loud and terrifying popping noises and this is usually heard when they are hunting for prey. During mating, they will also be heard making noise to attract the other.

The beak is in form of a shoe

The bird species get their name because the bird species’ beaks are shaped like a shoe and this is one of the most attracting feature about the species, the beak is about 24 centimetres in length and 20 centimetres width. The shoe beak is used to eat small animals in a single gulp and at the end of the beak you will get to see a curving downwards forming a hook used to hook fish.

Compared to the different bird species in the shoe bill stork is quite tall and on its two feet, they can grow up to 1.5 metres tall. The wings are also long that can extend up to 2.5 metres making them five times larger than their body masses. The wings can be used to scare away and intimidate predators like the crocodiles and these can flap around 150 flaps per minute which is quite slower compared to the average bird flaps per minute being 3500 flaps.