Opening of Ziwa Rhino Sanctuary in Uganda : Ziwa rhino sanctuary is the only place in Uganda where you can participate in on foot rhino trekking and the only place in Uganda where you can see the endangered rhino species however there’s more to the sanctuary that you’ll get to see like the  amphibians, reptiles, numerous bird species and the primate species bird species like endangered shoebill stork, the antelopes, hippopotamus, the black and white colobus monkeys, mona monkeys, blue monkeys among other primate species that can be seen during your visit to Ziwa rhino sanctuary. 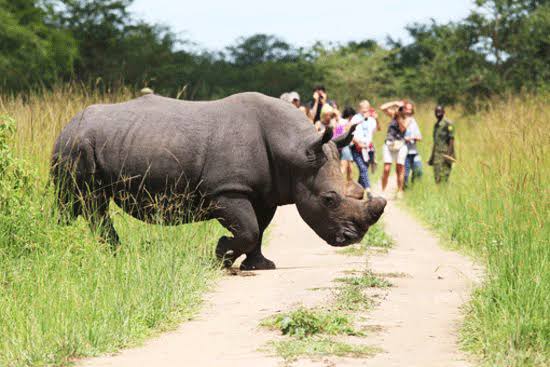 The sanctuary was established to conserve and protected endangered rhino species. The sanctuary was established by Ziwa rhino and wildlife ranches and rhino fund Uganda after a number of rhinos were killed however over the years there have been ownership wrangles of the sanctuary that led to the closure of Ziwa rhino sanctuary because of the fear of compromising the state of the endangered species and he Uganda wildlife authority led to its closure. A statement issued by the Uganda wildlife Authority, it stated that the Ziwa rhino sanctuary would be opened  by June 10th 2021 which will allow all tourists interested in visiting the sanctuary to take part in a number of activities that the sanctuary has to offer for an amazing Uganda safari.  The sanctuary is a home to a number of animal and bird species that can be seen when you participate in the different activities and these include;

At Ziwa rhino sanctuary, you’ll get the opportunity track the southern white rhinos while on foot which is quite interesting about the activity is the fact that it can be done on foot which give you an up-close look at the rhinos while they carry the different activities.  During rhino trekking you’ll be accompanied by a knowledgeable guide and a ranger. The ranger will help you protect against any attacks in case of the activity which is quite rare because the rangers are always in position to take care of the trekkers in order to have an amazing and safe experience during the activity. The knowledgeable guide will give you all the relevant information concerning the species like their feeding patterns and how the co-exist with one another while in the sanctuary as you also take pictures of them enjoying their time in the sanctuary.

You can also part in canoeing on the swamps that will ensure you have an amazing time in the sanctuary as you will get to see a number of animals species grazing in the plain and a number of bird species like; the water birds grey crowned cranes, great cormorants, Egyptian goose, Africa king fisher, African eagle among other bird species that will be rewarding to birders interested in seeing a number of interesting in bird species. You will also get to see the along the Lugogo swamp and the sunset which will make the sanctuary quite beautiful as you watch the crocodiles waiting on their prey.

Ziwa rhino sanctuary is a home to 300 bird species which can be seen in the different woodlands, swamps within the park which are habitats to a number of bird species making the sanctuary the one stop area for birders interested in seeing a number of bird species including water birds like  the blue spotted dove, booted eagle, bronze manikin, the endangered shoe bill stork, African black-headed oriole, ring- necked dove, red winged starling that can be seen along the four birding trails within the sanctuary found.

The guided nature walks in Ziwa rhino sanctuary are among the rewarding activities that can be carried out where you’ll see a number of attractions like the numerous bird species, reptile species, and mammal species like antelopes, bush bucks, hippopotamus, and antelopes among other species. you will get to see a number of  nocturnal animals in the sanctuary which will ensure you have an a amazing time in Uganda.