Home » Best places to visit the gorillas in Africa

Best places to visit the gorillas in Africa

Best places to visit the gorillas in Africa: The gorillas are one of the animals on the earth that very many people are interested in visiting and the African continent is the only continent on which you can visit these exciting gentle giants. These are the largest and most powerful primates and yet very humble individuals. The biggest attraction about the gorillas is the fact that they share 97% of their DNA with humans. In the primate family, the chimpanzees are more intelligent and more jumpy than the gorillas. The gorillas are however wise animals, with charisma and humble nature. 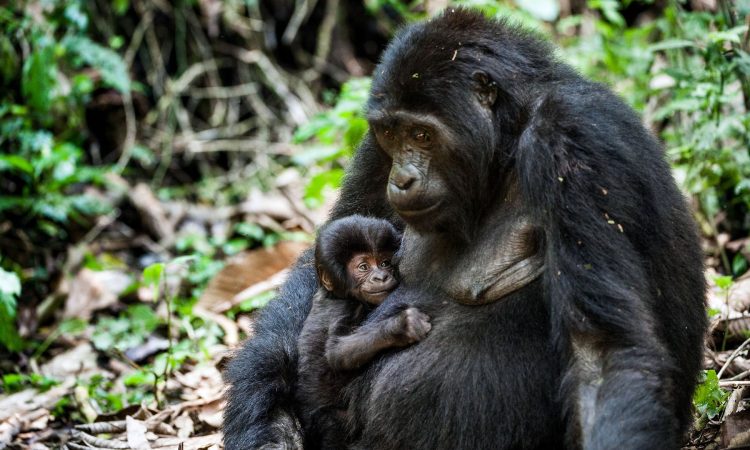 All the gorilla species have some features in common for example the broad shoulders and chests, the forearms are larger than the back legs also the hairless faces with large nostrils and eyes close together. However you may be able to tell them apart basing on size as the eastern gorillas are bigger in size as compared to the western gorillas and their body fur is thicker, longer and darker with a fully grown male weighing about 200 kilograms.

These gorillas are mostly omnivores as they feed on the green in the forest but also eat the small insects and eggs. They live in families which are led by a dominant male silverback gorilla and these families can have up to 50 individuals and the silverback is in charge of leading and protecting each member of the group. He is only replaced after he dies or when he gets weak and a stronger male from within or an external group overthrows him.

There are a number of places you can visit the different gorilla species however only one continent you can visit the gorillas in their natural habitat and these are the forests and mountain ranges of the eastern and central Africa. The countries are Angola, Cameroon, Central African Republic, Congo and the Democratic republic of Congo, Equatorial Guinea, Gabon, Nigeria, Rwanda and Uganda. Uganda and Rwanda are the most popular gorilla trekking destinations for travellers however with all the above mentioned countries; you get to choose which you are most interested in visiting. Western Africa has a shortage of instability but with very biologically diverse destinations while East Africa offers you stability. Let us look at each of these destinations with more detail.

Bwindi is also the only gorilla park where you can take on a gorilla habituation experience. Spend more than the allotted 1 hour for gorilla trekking and watch the gorillas adapt to human presence and keep in mind these are wild animals so it is very important to follow your ranger guide’s guidelines. The chances of seeing the mountain gorillas in this park are above 98%. You can opt to fly into the Uganda at the Entebbe International airport and drive 8 hours to the hotel in Bwindi or take a domestic flight to Kisoro or Kihihi air strip near the park. You may also fly into Rwanda at the Kigali International airport and drive fours crossing at the Katuna Rwanda-Uganda land border. If you opt to fly into Rwanda headed for Uganda, be sure to apply for an East African visa that will cut visa costs between the countries.

Democratic Republic of Congo. One of the most authentic mountain gorilla trekking destinations is the Democratic republic of Congo. This is another country where you can visit the mountain gorillas besides Uganda and Rwanda. The mountain gorilla trekking activity is done in the Virunga national park and a mountain gorilla permit goes for 400 USD which is the cheapest offered permit however when booking a gorilla permit, it comes in a whole package inclusive of transport, accommodation with meals and visa offered by the Virunga national park with standard days and set off times from Goma Grande barrier border building the starting point of all tours headed to Virunga. This came as a security measure for a country has been faced with instability and security concerns. There shouldn’t be much worry anymore visiting the Virunga national park as you are escorted by a security convoy from the Grande barrier border, throughout the trip until you are done and back to the border.

Nigeria. You can visit the cross river gorillas in Nigeria however the chances are still low however much effort has been put in the sector and this is mainly because the Cross river gorillas are aggressive towards humans so habituation has proven impossible and they are found in the Cross river national park, the Mbe Mountain and Afi mountain which covers an area of about 2,900 square miles which is such a big area to move and meet a family.

Central African Republic. This is the ideal destination for those interested in trekking the western lowland gorillas. The Wild Wildlife Fund (WWF) has a successful research and habituation camp and one family in Dzanga-Ndoki national park has been habituated and can be visited by tourists however much the forest is still thick so photography maybe a challenge but high chance of meeting with these gentle giants thus Best places to visit the gorillas in Africa.

Republic of Congo is also a great place to spot the western lowland gorillas as there are two habituated gorilla groups in the Odzala national park and these are spotted in hiding as you wait for them to expose themselves. You can also see them in a number of marshes and swamps as they live harmoniously with the other wild animals like elephants, buffaloes, waterbucks. You may also check out the Lefini Reserve on an island and the permit to the Odazala national park goes for 355 USD per permit.

Gabon has 12 national parks within its boundaries offering a number of wildlife experiences however for gorilla trekking, it is a long shot as it is not developed in the country. The Moukalaba-Doudou national park is known to have among the biggest concentration of gorillas in Africa and a gorilla habituation program in the Lope National park that is also a wildlife destination. The western lowland gorillas of Gabon also stay in the Loango national park which connects all the way to the Atlantic Ocean so you can envision the biodiversity this park has; bird life, marine life, forest life along with wildlife thus Best places to visit the gorillas in Africa.

Equatorial Guinea is among the only remaining homes of the western lowland gorillas and you can visit them in the Monte Alen National park however the tourism in the country is not as developed and there are no habituated families with a thick forest. It is possible to see the gorillas however as there are a few skilled individuals that have been conducting successful treks in the forest on a daily. This is the ideal adventure spot for gorilla trekking as it is very virgin and unexplored.

Angola is another home to the western lowland gorillas and can only be visited in the northern sector in the Cabinda enclave near the River Congo. The tourism is not well developed in Angola and the chances of meeting the gorillas are low.