Home » How strong is a mountain gorilla? 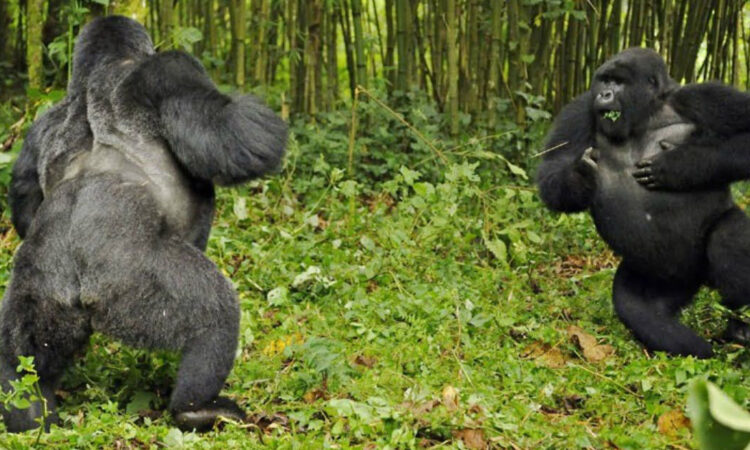 The mountain gorilla strength is estimated at 10 times more but can carry up to 27 times their body weight. This body strength has been seen as gorillas have pushed banana plantations down by mere passing through, bending iron bars meant to keep them in cages another reason as to why these are hard to keep in captivity. The bite of a mountain gorilla is estimated at 1,300 pounds per inch which is greater than for a lion times two.

The mountain gorilla strength against that of humans is still a wonder but there are some estimations that have proved that the mountain gorilla on top of being a wild animal, has much greater strength than a human. Mountain gorillas are physically built animals with broad features such as arms, broad chest, more like a muscular male.

The gorilla genus are the largest of the primates on the earth and have been recognized as the strongest animals on earth. The gorillas’ weight doubles the average human weight which ranges from about 80 kilograms while that of the adult male gorillas’ ranges between 136 to 227 kilograms.

Compared to a human being the muscle strength of the gorillas is up to 4 to 9 times much stronger than that of the usual human being. The gorillas live in a family setting and these families are led by a dominant silverback gorilla and this gorilla is selected by display of his strength among the other male gorillas. The physical appearance of the gorillas is another added advantage of the strength such as their cone shaped head to support the strong jaws and teeth.

Can a human being fight off a mountain gorilla?

Can a human being fight off a mountain gorilla is a much asked question in the morning briefing of guests headed into the forest for a gorilla trekking experience and the most common answer is yes and no. Here are a few facts that back this argument. Being a wild animal like any other, their strength is much greater than for the human being however small or big. To defeat or put down one adult gorilla, you would need back up from more than 2 adult humans.

If a mountain gorilla charges and attacks a human, the results may be fatal and chances of you winning will be only if the gorilla seems to let you win or go. The advantage with the fact that the mountain gorillas being wild is that they tend to only fight back with the wild and rarely to not at all with the humans. They may charge or threaten but never attack.

The most common fights with the gorillas are between themselves and these are often between the male gorillas fighting or protecting their family members. The gorillas may charge at you once you pose as a threat and once you retract, they will usually go back to minding their business.

The skin of the gorillas is quite tough and even if you try to punch the gorilla, you will be the one to get hurt however this is strongly advised against as you may be on the disadvantaged side. Their skins are tough as well as the skeleton that’s the skull and the other bones as compared to the humans.

These animals maybe stronger than humans by far but they are gentle and usually calm that is why they are referred to as the gentle giants. You will definitely enjoy a calm time with them once you meet them on your gorilla trekking in any of the above mentioned destinations despite their capability of causing significant damage. Book yourself one of the safari packages for a chance to get within 6 meters of these endangered but thriving animal species.