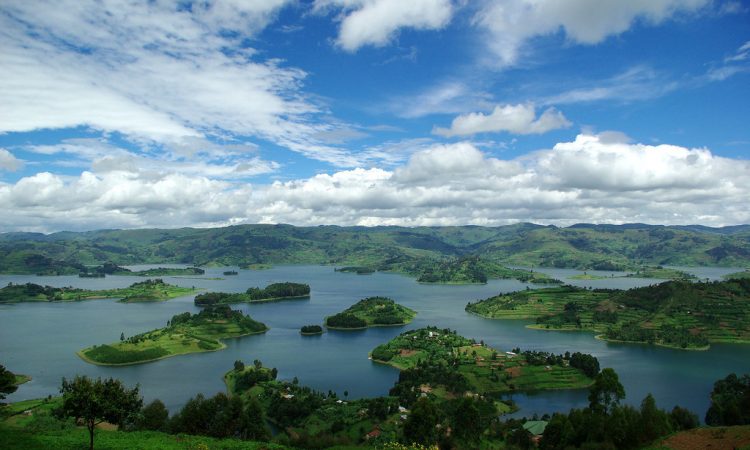 Depth: The depth of Lake Bunyonyi is one of the key interesting factors that will push you to come and see the lake in Uganda. Located in Kisoro district the home of gorillas, the lake is one of the remote attractions that the district boasts of. Lake Bunyonyi is the deepest among the water bodies in Uganda at a depth of 40metres/ 130ft but many guides/ locals and tourist guides claim that the lake is as deep as 900 metres which makes it the deepest lake in Uganda and the second deepest lake in Africa after Tanganyika.  This has attracted many tourists to come to Uganda in order to have a look at the hidden gem and it should be noted that they are not disappointed with a lot of attractions they find their way and a number of activities that they can participate in.

Islands: You cannot visit Lake Bunyonyi and fail to have a tour around the different islands found on the lake. Lake Bunyonyi inhabits 29 Islands which are of different significance in the history of Uganda. Visiting the different islands will give you the chance to see a number of attractions including the most famous islands of Akampene Island also known as the punishment island, Bwama and Njuyeera Island also known as sharp’s island.

Bird species: The lake Bunyonyi means a place of small birds that can make sense once visited. Lake Bunyonyi is a birders paradise that will give you a chance to a number of bird species as you explore the different islands on the lake. As you enjoy breathtaking views of the lake and the beautiful lake breezes you will have a chance to see a number of the 200 recorded bird species at the lake which will delight you while on your tour around the lake.

The Batwa community: On your lake Bunyonyi safari, you should not miss out on carrying out the community tours where you can visit the Batwa community one of the most authentic groups of people that will be seen while you visit Lake Bunyonyi. Interesting about the group of people is the fact that they are an indigenous group of people that dedicate their lives to the forest because they are mainly forest people. The Batwa/ the forest pygmies were evicted from Mgahinga Gorilla national park and Bwindi impenetrable national park after the introduction of Uganda gorilla tours.

But this has not affected the tourist access to the interesting group of people. While carrying out Lake Bunyonyi tours, you can go on the Batwa cultural trail to the Echuya forest where they are found. On meeting them, you are entertained by the group with cultural dances, songs and so many more. They can also include you in their daily activities of honey collection, hunting of small creatures which are an interesting encounter you should not miss out on while on the Lake Bunyonyi tour.

Landscape: Before you soak in the beauty of Lake Bunyonyi, don’t miss the opportunity of seeing the most beautiful landscape of the Kigezi region. On your way to the lake a number of features including the traffic-free roads that will make you cruise comfortably in your car. You will also  have the opportunity to see the different attractions in the area before heading o the lake among which may include the beautiful hilly areas/ hills that help in the modifying of the environment most of the roads that lead to the lake are generally steep which will increase your adrenaline as you await the wonders the lake has to offers. The communities that are found along the way can also catch your eyes as they conduct their businesses like their fruit stands where you will have a chance to buy a number of fruits like bananas, sugarcanes which are all organic and straight from the farm making the experience a memorable one.

Mountain biking: You can also include mountain biking while on your Lake Bunyonyi where you can carry out biking around the lake as you experience the cool breezes as you go through the villages while seeing a number of attractions. Get ready to see exceptional views as you participate in the physical activity.

‘’Visit Lake Bunyonyi to take you on a fun filled adventure that is worthy of repeated visits.’’