Lion Tracking in Queen Elizabeth National Park: Queen Elizabeth national park is one of the 10 national parks of Uganda. It is located in Kasese district south of the country. The major attraction for visitors of this park is the tree climbing lions that are living harmoniously with the larger mammals like the elephants, leopards, lions, buffaloes and the rhinos along with the antelopes like the waterbucks and impalas. Chances of encountering the lions in the Queen Elizabeth national park is at a great chance especially the tree climbing lions in both the southern and the northern part. 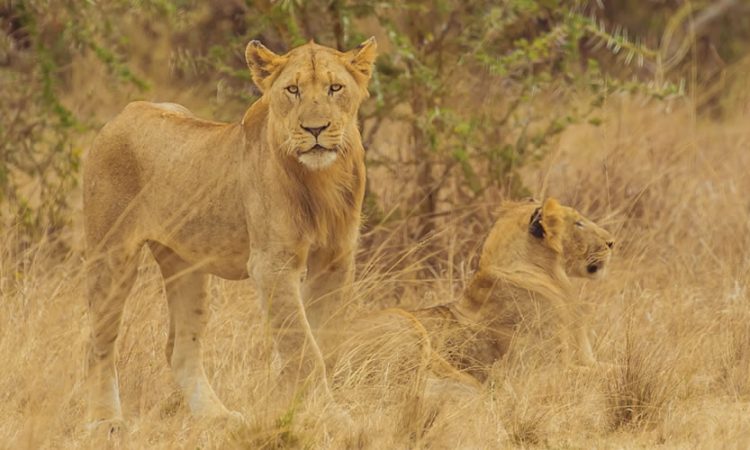 The tree climbing lions are majorly visited in the Ishasha sector of the park and this is located in the southern sector of the park. Ishasha is blessed with a large number of lions that can be seen enjoying the park up on the fig trees. You may not see as many lions on an ordinary game drive in the park on the defined paths that is why it is important to take on a lion tracking experience on your visit to the Queen Elizabeth national park. Queen Elizabeth national park is the only national park in the country that offers the lion tracking experience.

On this lion tracking experience, you will get close to the lions in their natural habitat; get off the track to get a clearer view which you will not have the privilege to on an ordinary game drive in the park on the defined paths. You will stay in the car following the lions closely as you watch them go about their day hunting, feeding and enjoying at leisure. This is a program or wildlife experience only offered by a team of knowledgeable, skilled and experienced researchers from the Uganda Carnivore Program (UCP).

The Uganda Carnivore program is a program under the Uganda Wildlife Authority, the governing body for all wildlife in the country. This program was commissioned in the 1990’s as the Uganda Large Predator Project that was aiming at the canines in Serengeti National park and the several unpredicted deaths of the lions. This program later changed with the increased number of sponsors supporting the cause of conservation and research. The program has been sensitizing the local communities on the relevance of the wildlife. While in the park, you will also notice a number of the lions and leopards having neck tags and the Uganda carnivore program is responsible and this was an initiative to monitor the predators and also be able to track their activity and all these predators have a well compiled database on almost all the predators in the Northern sector of the park. This has helped the park keep track of the numbers of the predators in the park as the numbers have been reducing majorly due to ignorant communities killing them.

Lion tracking in Queen Elizabeth national park has been an ongoing activity in the park where the visitors interested in the lions follow a pride of lions or an individual lion to study their behavior while in the wild, their feeding pattern and their social living. To take a part of this Lion tracking, one will need to book their slot in advance not on day of arrival. The lion tracking experience costs 110 USD for both the foreigners and non-foreigners while the Ugandan citizens will be charged 140,000 Ugandan shillings and 40 USD for the East African citizens. This is a community sensitive program as each 10 USD collected from this activity is diverted back to the local community to fund their projects through authorities of the park. The above mentioned prices are only for the activity and do not include park entrance fees. There are a limited number of people who can take on this activity per day.

There are three sessions of this lion tracking activity per day and that is the morning drive, afternoon drive and the night drive. The lion tracking experience lasts 2 to 3 hours for every drive and scheduled set off times so ensure to be on time to avoid being left behind and missing out on the activity or delaying the other teams of trackers. The recent development in the tracking technology that is a radio collar that the dominant lionesses have fitted on the necks have made the activity easier and seamless. The lionesses were the chosen ones as they usually move with a pride unlike the males that get independent from the groups. The only female lions that qualify for this collar are those that are not pregnant, are not very old and are in good shape and health.

While tracking the lion, more detailed information will be shared to you by the researcher on the history, biology, way of living and threats and much more which you may not receive on an ordinary game drive so be sure to book yourself this lion tracking experience when in headed for Queen Elizabeth national park. There is so much more to do when in Queen Elizabeth like boat cruise, visit the Kyambura gorge for the chimpanzee trek, visit a crater lake or the Katwe salt plain. Check out our safari packages with Queen Elizabeth national park and get in touch.