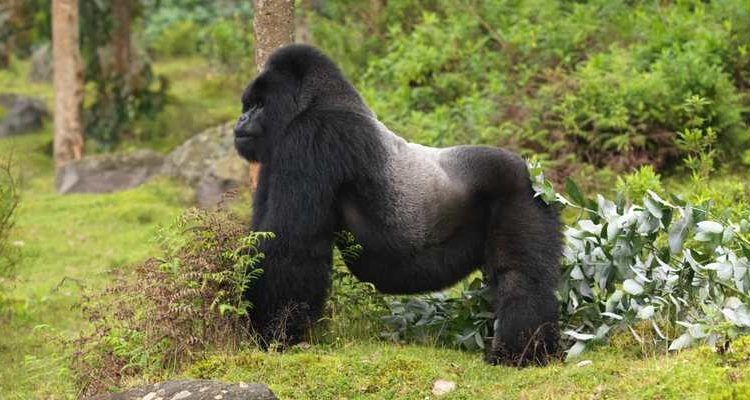 The mountain gorilla is sub divided into 4 types of gorillas and these include the cross river gorillas and the western lowland gorillas that are sub species of the western gorilla and the mountain gorilla and the eastern lowland gorillas that are a sub species of the eastern gorillas. The gorillas are large mammals with a powerful physique fully covered in thick black fur all over their bodies. Their chests are broad with an outstanding abdomen with dark skin.

The gorillas in each of the sub species differ in their physique, their size, habitat preference and social ways. The gorilla species is as close to the human as they are to the chimpanzee species according to the primatologists. You can see the differences in the length in their body hair, the width of their faces as well as the color of the hair.

The western and the eastern gorilla both have sub species that tend to stay in lowland areas and these are the western lowland and the eastern lowland gorillas and these are smaller in size and this makes them be able to move around more swiftly as compared to the highland gorillas. The eastern gorillas also have longer faces and wider chests which make them appear much bigger in size. The gorillas just like the humans have a unique identifier which is the finger prints for humans and it’s the nose print for the gorillas.

The gorillas all use their four legs to move on their knuckles however sometimes tend to walk straight up but for shorter distances and usually when carrying food and also when trying to waive off a threat. The gorilla’s life span is estimated to be about 35 years to 40 years in the wild where they thrive best. The western gorillas can live and thrive in captivity and can go up to 50 years and above when in the zoos. The mountain gorillas are however unique and cannot thrive fully when in captivity.

For example, the western gorilla once thrived at the Colombus Zoo and Aquarium and was known as the oldest thriving gorilla in the world which died at the age of 60 years on 17th January 2017.

The silver back gorillas are usually the male gorilla aged 12 years and above. They upgrade from being known as black backs in the years of 8 to 12 where their fur is still thick and black. The black back gorillas are usually submissive to the other gorillas and these are the silver backs. The name silverback comes from the silver line that tends to grow on the lower backs of the adult make gorillas downwards to the hip section.

The silverback gorillas tend to protect the family and fight for their position to show and prove their strength to the rest of the family members. Every gorilla family is ruled by one dominant male silverback gorilla. You may find a family has more than one silver back but there is and can only be one dominant silverback. If the other silverbacks cannot be ruled, then they tend to leave that gorilla family to start one of their own.

Rwanda’s Volcanoes national park has an estimated population of about 380 mountain gorillas living in the park and about 10 habituated gorilla families which visitors can trek. A mountain gorilla trekking permit in Rwanda goes for 1,500 USD per person. Get in touch with us and let us take you to visit the silverback gorillas in the wild.