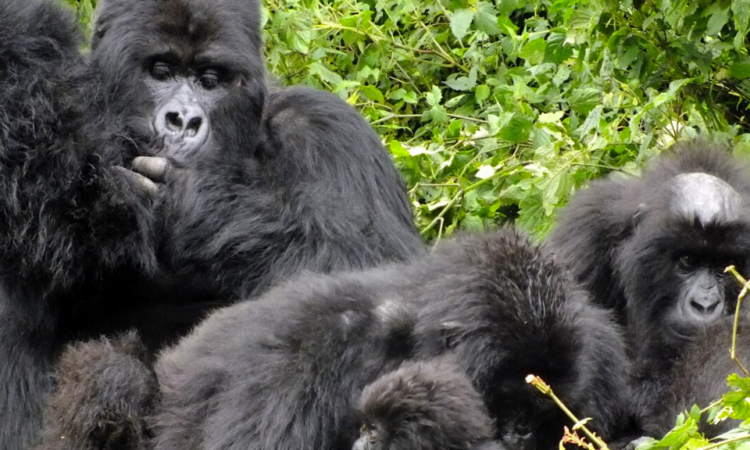 Volcanoes National Park has a complete number of around 380 mountain gorillas.  The volcanoes national park is part of the wider Virunga mountain ranges spreading all the way to the Democratic Republic of Congo.  Around 500 mountain gorillas occupy the Virunga range. The other half live in Uganda’s Bwindi impenetrable National Park and Mgahinga gorilla parks.

As their name suggests, mountain gorillas live in woods high in the mountains, at rises of about 8,000 to 13,000 feet. Their fur is thick, and a greater amount of it, contrasted with other incredible gorillas. The fur assists them with making due in a living space where temperatures frequently drop below freezing point. They also have solid arms, an enormous chest, and wide hands and feet. At the point when the gorilla ages, the hair on the saddle of the back becomes white, similar as the silver hair of aged people. This is how the older males get to be called silverbacks. . Males are much larger than females. A full-grown male mountain gorilla could weigh about 140–206 kg and stands at a height of 1.7 m upright.

The Susa A gorilla family is one of the most popular but the hardest gorilla family to track in Volcanoes National park. The name Susa came from the Susa River which courses through their home reach. Susa Gorilla family was made well known by Dian Fossey, a gorilla protectionist who spent many of her years doing research on Mountain Gorillas. It was perhaps of her most loved bunch and frequently carried out research all the more frequently on this particular family compared to others. This family group usually moves far and now and again so tracking the Susa A group isn’t simple however the game officers move earlier and ahead of you and find it before so you don’t need to burn through a great deal of time walking the wildernesses of Volcanoes National  Park.

Another unique thing about this family is its pair of twins called ‘Byishimo’ and ‘Impano’. The renowned lively youthful pair (Byishimo and Impano) make this gorilla bunch brimming with movement and invigorating to watch. The family also has a gorilla named Poppy who is quite possibly one of the oldest habituated gorillas. Susa A has over 24 members including 3 male gorillas and 3 Silverbacks, it turns out to be the largest and most interesting group to track in Volcanoes National Park Rwanda. The head silverback of this group is called Kurira.

This gorilla group trek is most recommended for fit tourists who are willing to move great distances to see this amazing family. Watching with this family is truly a once-in-a-lifetime experience! Remember you are conceded a 1 entire hour of an experience with the Susa gorilla bunch, an ideal chance for you to watch its pair of twins meander around while eating and playing. This group previously had 42 members but later on in 2009 split up which caused a reduction in number of individuals to 24 members.

From Susa A family group came Susa B after a split that happened in 2009, also known as Karisimbi group, a name it acquired because it typically lives in the slants of Karisimbi spring of gushing lava which is very nearly 4507 meters above ocean level, the most noteworthy mountain pinnacle of Rwanda. This gorilla family at times moves on top and this makes the trek a bit hard as tourists can take a whole day to track this family. Nyagakangaga, a Silverback that at present heads the Karisimbi family split away with 13 individuals and took his family to the upper inclines of Mount Karisimbi – One of the Virunga Volcanoes

Sadly, another portion split away from Karisimbi on April 10th, 2012, to make another family group called Isimbi. Today, Karisimbi group is made up of an obscure number since it has not been seen since October 2016. Be that as it may, before it crossed to DRC border, on October 17th, 2016, the total number of individuals was 10 including 5 Silverbacks, 2 Blackbacks, 1 Sub-grown-up female, 1 adult female, and 1 Adolescent, Most Popular Gorilla Family Group in Rwanda

The trek for Susa family group is genuinely difficult and you might find it extreme as you go through the thick undergrowth. The high elevation and the lofty, dangerous paths can make the journey depleting, yet it’s certainly worth the journey to spend time with mountain gorillas in nature.

As you prepare for your trip to the Volcanoes National park, Here is a few interesting facts about mountain gorillas that could give you deeper understanding for these primates.

Mountain gorillas can eat all day!

Mountain gorillas spend about a fourth of their day eating, mostly plants. Around 85% of their eating regimen is comprised of leaves, shoots and stems, however gorillas can likewise eat hatchlings, snails, subterranean insects, and even roots, barks and spoiling wood.

They can live up to more than 40 Years of age in the wild!

Gorillas are classed as newborn children until they stretch around three-and-a-half years old, and grown-ups from something like 8 years. Males between 8-12 years are called ‘blackbacks’ , Most Popular Gorilla Family Group in Rwanda . Then from 12 years of age, they foster a silver part of hair over their back and hips, procuring them the name ‘silverback‘.

They are an endangered species.

The fundamental danger to mountain gorillas is the degradation of their living space. As the area’s populace develops, the land is progressively changed over for horticulture, and rivalry for restricted natural resources prompts deforestation. People may likewise lay traps for bush meat, which can inadvertently harm the extraordinary primates. Gorillas don’t simply remain in their timberlands. They adventure onto farmland to eat crops like maize and bananas, which can cause conflict between these primates and neighboring villagers who need to earn enough for their livelihood.