Bird watching  in Uganda National parks : Uganda is known to be home to over 500 bird species spread across the country, some in forests and others in parks. When people visit the country they always wonder, which park has the best birds or at which park can I have bird watching sprees? 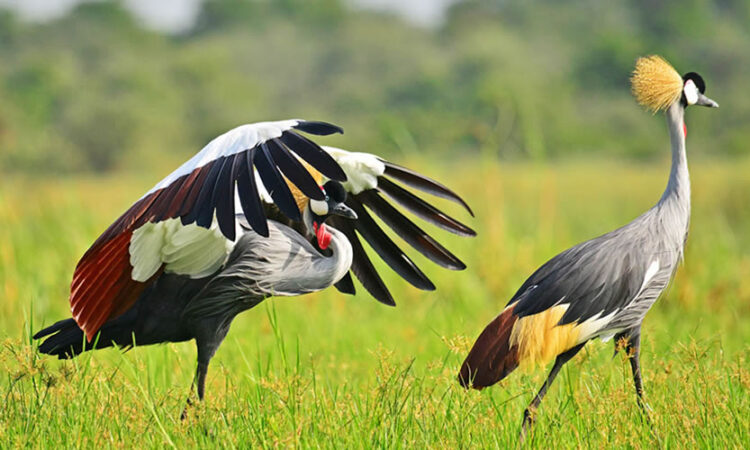 Here is a list of the bird watching parks in Uganda.

Located in Bundibugyo, this park is a heaven for bird watchers with over 550 bird species and this being the most visited park makes it ideal, commendable, and recommendable. With birds like Flamingos, African skimmer, lesser swamp-warbler, papyrus Gonolek, and many more. The best time to see these birds is between June-August and December- February. Come and see the various bird species. The park was Established in 1952 as Kazinga National Park but later renamed to commemorate the visit of Queen Elizabeth 11. Queen Elizabeth is the most visited park in Uganda. It is located in the Kasese district, roughly 9 hours on the road from Kampala. Queen Elizabeth National Park is strategically located at the back foot of Mountain Rwenzori and between different crater lakes. The glamorous view of the folding mountains of the moon and the mystical sights of the kazinga channel compels many tourists to this park.

Located in western Uganda, this park is known and voted as Africa’s best birding spot by the African Birding club, this is the heart and soul of Uganda birding the one that makes and breaks bird lists with over 357 bird species. Some of the birds here are endemics, such as the African broadbill, pale-breasted ill topics, Black bee-eater, Kyiv gerund rush, Forest Robin, yellow-eyed black flycatcher, Rwenzori Battis, and Equatorial Akalat. The best time to see these birds at this park is between May and August when the conditions are favorable enough for the birds to be seen around. the park is home to over 400 Mountain Gorilla which is more than half of the entire gorilla population in the entire world. Bwindi Impenetrable holds the largest number of endangered species in the entire world. In 1991 it was gazetted as a national park while it was declared a UNESCO Natural World Heritage in 1994. The name Bwindi originates from the word “mubwindi” which means “a place full of darkness” the darkness and impenetrability are due to the heavy rain forests covering the area biologically dating back to almost 25000 years ago, Bird watching  in Uganda National parks.

Located in Lolium, Masindi this is the ninth among the top ten birding destinations in Africa with bird species such as the swamp flycatcher, bee-eater, Abyssinian ground hornbill, northern red bishop and so many more. The shoebill can also be found here but the most reliable being the mamba Swamp. These birds can be seen during a wildlife game drive while driving through the park or on a boat ride at the bottom of the waterfalls and the best time to see the birds is between April and August. Murchison Falls is the oldest game park in Uganda harboring on the river banks of the world’s longest river. It is found in Masindi District which is part of the Albertine Region roughly 310 km from the capital in Kampala. The park was named after Murchison Falls on the River Nile.

This is the smallest national park located in  Mbarara and is houses over 351 different Bird species. Making it one of the ten birding spots in Africa and birding is the major activity here known for birds like the shoebill stork, pelican, Fish Eagle, and cormorant found on the shores of the lake. This is the only park where you can even see these birds while enjoying a horseback ride around June-August which are the best times to see these birds.