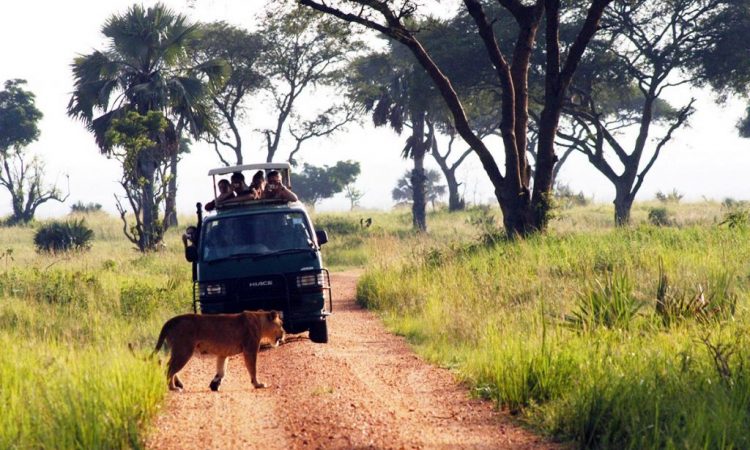 Details of the activities

Game drives in Murchison Falls National Park will offer you rewarding experiences during your Uganda Safaris. The park is a home to a number of attractions including the famous Murchison falls, four of the big five animals including the lions, elephants, buffalos and the leopard which are among the 76 mammal species in the park.

Game drives are some of the most rewarding activities that you should participate in for purposes of seeing a number of attractions within the park and these can be carried out along the Buligi peninsula where you will have exceptional views of lake Albert and the Victoria Nile and interesting about the area is the fact that lions in the park are commonly sighted in the area hunting for prey which is commonly the Uganda Kobs, you will also see a number of animals in the park quenching their thirst from the water sources like the hippos, elephants, a number of antelope species which is quite rewarding.

Birding in is among the most interesting Murchison falls National park that tourists can participate in for memorable Uganda safaris while in the park. The park is a home to over 300 bird species which can be seen during birding and a number of other activities in the park like the launch trips, guided nature walks, game drives where you will see a number of birds species however during birding in the park, you will have the chance to see number of bird species as compared to other activities in the park.

For amazing experiences in Murchison falls national park, you can participate in the launch trips within the park and these include the upstream launch trip from Paraa where you will see a variety of wildlife species grazing in the plains of the park like the buffaloes, elephants, zebras among other animal species, you will also see astonishing frontal views of the falls in the park where you can take pictures of the attractions and the numerous bird species in the park. The sundowners launch trip will also offer rewarding experiences where you will see a number of animals as they head to their hiding spots for overnight to the equatorial sunset reflected on the river.

Are you interested in game viewing in Murchison falls national park your can carry out nature walk as part of the rewarding activities in Murchison falls national park there are a number of trails in the park, like Kaniyo Pabidi and Rabongo Forests where you will see a number of attractions within the park like a number of primate species like the black and white colobus monkey, vervet monkey, red tailed monkey, mona monkey, Dent’s Monkey, silver monkeys among other primate species during the nature walks  along the Nile delta, you will also see a number of bird species along the swamps in the park like the shoe bill, Amur falcon, booted eagle, red-faced barbet, sooty falcon, bunting, crested barbet, western reef heron, grasshopper buzzard among other bird species.

During the nature walks in the park, you can also opt to carry out the top of the falls hike where you will hike to the top of Murchison falls and have exceptional views of the park, the magnificent falls from an aerial view.

Sportfishing is another rewarding activity in Murchison falls national park that tourist should participate in for memorable Uganda safaris. The activity is usually carried out at the base of the falls where a number of fish species can be caught for example Nile Perch, Cat fish, Tiger Fish, electric cat fish, Nile tilapia among other fish types and after the activity you will get to keep the fish caught as a reward for your participation in the activity.

During sport fishing in the park, you will get to see a number of bird species like Blue Quails, he Lesser and Great Swamp Warblers, Chubb’s and Caruthers’s Cisticola Black Crake, Common Squacco, Striated, Black-headed, Herons White-headed and Black-billed Barbet, Greenwood Hoopoe, Blue-breasted Shining-blue Kingfishers, you will also get to see a number of animal species quenching their thirst from the shores and riverbanks of the different water sources in the park making the activity quite memorable and rewarding.

During your Murchison falls national park tour, you can participate in cultural encounters in the park where you will get to visit the Mubako community which is such a rewarding community where tourists will have an amazing time when they visit the community. On reaching the community, tourists will be mesmerized by a number of huts where a group of villages will welcome you to their community take you around and show you how people carry out their daily activities. You will visit their crafts centers where you will get a number of handmade items from plants products. In the evening the local community will gather around the fire place where they will perform cultural dances, perform a number of plays, sing a number of songs for a number of rewarding experience in the park

Have the best experience in the park by booking a hot air ballooning experience in the park from an aerial view which will offer amazing experiences the balloon safaris are also quite unique and interesting for tourists interested in watching a vast landscape during game viewing where you will watch a number of different animal species in the park like common duiker, defassa waterbuck, oribi reedbucks, impalas, buffalos, bush pigs, giraffes, eland, and zebras, Uganda kobs, bird species like  Blue Quails, he Lesser and Great Swamp Warblers, Chubb’s and Caruthers’s Cisticola Black Crake, Common Squacco, Striated, Black-headed,  Herons White-headed and Black-billed Barbet, Greenwood Hoopoe, Blue-breasted Shining-blue Kingfishers can also be seen flying over the hot air balloons which will be rewarding n the park which will be quite memorable in the park. the activity in the park is organised by Jobihani Dream Balloons, Para safari lodge and because it is a highly sought after activity it is advised that tourists book in advance so that they don’t miss out on the adventure during their   memorable activity in Murchison falls national park.