Senkwenkwe gorilla orphanage is one of a kind in the whole world located in the Rumaganbo at the headquarters of the Virunga National Park, a park that is famous for the mountain gorillas and also a number of attractions like the active volcano mountain Nyiragongo which is part of the Virunga mountains chain, where you can see the lava flowing from the earth’s crust, a number of chimpanzees which you can see once you participate in chimpanzee trekking, boat cruises with a number of water bodies that can be found in the park. Visiting Virunga national park will give you the opportunity to see a number of attractions that will make your tour a memorable one. 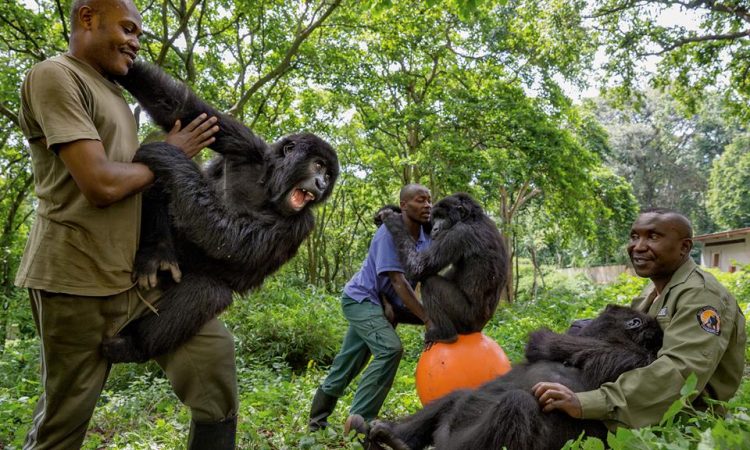 For anyone interested in accessing the gorilla orphanage, they have to first get to Virunga national park because the gorilla orphanage is located within the park. Accessing the road the park can b done through Uganda and Rwanda side that is in Uganda, you can access the park through Bunagana border post in Kisoro district where you will transfer to Bukima point in the park where gorilla trekking in Congo-Virunga national park starts from.

From Rwanda, you can pass through Gisenyi town where you will then connect to Goma district where you can access the park. By air, there are flights every day by Ethiopian Airlines to Goma district and from Goma, the park organizes private transport for their tourists which is quite safe because you are accompanied by the park rangers and security (the military to make you feel safe)

The Senkwenkwe orphanage was established to ensure that the orphaned gorillas have a second chance to live happy lives even without parents. The whole idea of the gorilla orphanage was a result of two gorillas Ndeze and Ndakasi that lost their parents because of the increased poaching in the area.

The gorillas where found in Goma town which is highly polluted and noisy which is not a great of the vulnerable creatures, a team of park rangers from Virunga national park rescued them and they brought the orphans to the park that was in 2009, from the increased poaching, they realised there would be a big problem for the gorillas and that is why they started an online campaign to raise money. From numerous donations all around the world, they were able to raise a huge sum of money that was used to establish the facility.

In 2010, a pair of gorillas from Rwanda that was having stress back home after the death of their parents and these were transferred to the orphanage; Maisha and Koboko settled in perfectly with Ndakasi and Ndeze. the two became a family but unfortunately the two orphan gorillas in Rwanda lost their lives because of health complications and from that day onwards the orphanage has increased the efforts of saving the orphaned gorillas they even go an extra mile in partnership with the Virunga national park to combat poaching by going on regular patrols to avoid any cases of poaching of gorillas.

On reaching the orphanage, you will see a number of dedicated personnel interested in the welfare of the gorillas that they give extra care to all of them. By 7:30 am it is breakfast time for the orphaned gorilla in case you reach in time you will be able to see the gorillas being fed on nutritious porridge. You will also have a chance to feed the infants by using bottles. The orphanage is designed in a way of making the orphans feel at home and peaceful and to have normal lives like the other gorillas. After the gorillas have their breakfast, they are then transferred to the garden where they spend their time playing with one another and eating from trees in the garden. After playtime and spending most of their time eating, the gorillas are bribed with food back into the facility.

This is because they enjoy playing too much but they cannot be left to roam around in the dark in the forests because they are not ready to settle in yet. But they are taught on a daily basis on how to act like the gorillas in the wild that when they are all grown and ready to go into the wild they are released into the wild. At night, the gorillas are provided with leaves like celery which is also edible; the leaves provided are used by the gorillas and these are made into nests for overnight.

The Future of the Gorilla Orphanage

There are future plans for expansion of the gorilla orphanage that will enable the gorillas to feel in a more natural setting and ensure that they are trained so they can go back to the wild to enjoy their lives as normal gorillas. The orphanage is also interested in ensuring that the gorillas feel much more at home in the orphanage with the expansion of the perimeter wall where they will be left to sleep outside the facility and not inside in order to get used of the wildlife before they left to go back in the wild.

Come be part of the fun experience at the Senkwenkwe gorilla orphanage as you see the restoration of hope in the eyes of the gorillas that can be seen playing joyfully in the garden of the facility. On your  Congo tour, you can also include the Virunga national park where you can carry out chimpanzee and gorilla trekking, boat cruises, nature walks, hiking the Virunga mountains which will make the experience fun and memorable.