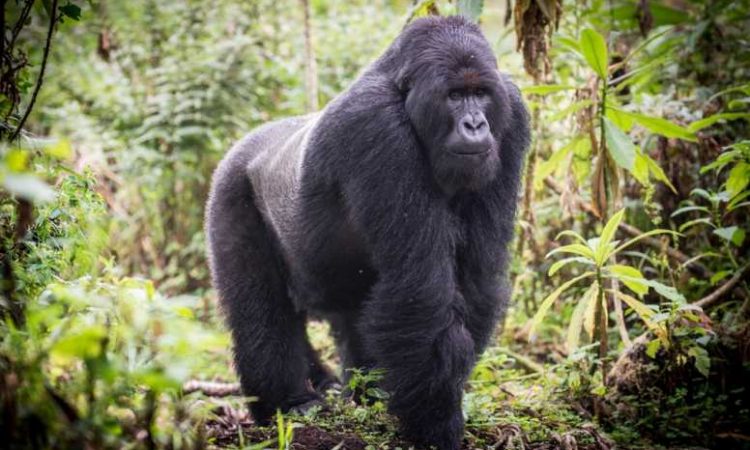 There are four different types of gorillas that are categories into groups the western and the eastern gorillas. These are characterised with different features, sizes, strengths, physical appearance, diet, habitat among other characteristics. The eastern gorillas have two subspecies that is; mountain gorilla eastern low land gorillas, the western gorilla has two subspecies as well including western low land gorilla cross river gorilla.

Gorillas are found in Africa where the conditions are necessary for their survival, in Africa, they are found in the equatorial region. On the western side of Africa, they live in the western region that is in Cameroon and Nigeria where we can find the cross river gorilla. In East Africa, they can be found in the Virunga Mountains that is the eastern gorillas and in other parts of Congo we can find the western lowland gorillas. It should be noted that gorillas are interested in areas where there is plenty of food and other necessary resources to meet their daily needs. It should be noted that when gorillas are picking an area as a habitat they put much emphasis on the fact that they are able to meet their needs. Since there are different gorilla species, these have specific and different habitats that they live in.

The gorillas regardless of the type are herbivores animals that mainly feed on fruits, leaves, tree barks, stems, fruits among other vegetation types but in seasons where fruit is readily available, they prefer fruit to any other food source but it should be noted that fruits are available in certain seasons which means they eat other food sources like leaves and in some instances, they can feed on small insects like caterpillars, termites, snails, ants larvae and so on. Gorillas rarely drink water because the food that they consume contains water, therefore, it is very hard o see a gorilla taking water straight from its water source. It is believed that a gorilla can consume up to 18 kilograms of food a day this helps them to maintain their health and become strong. Among the gorilla species, eastern lowland gorillas, western lowland gorillas are very much interested in fruit and they can move longer distances of 500 metres daily in search of fruit than any other gorilla species.

Just like the chimpanzees, gorillas also live among groups however the gorilla groups are small in numbers compared to the chimpanzees. The gorilla groups are dominated by a strong silverback who usually goes into power by fighting with other silver backs in the groups and the winn]er emerges the dominant silverback of the group who is taken as their leader. The dominant male is the only silverback that has the right to mate with other adult females in the group and this is some of the reasons why some adult black migrate from their homes and go and start their own groups in order to mate with other females.

In cases where dominant silverback dies, the gorilla group disperses and migrates to other groups and it is noted that the mother separates from its offsprings among the different types of gorillas which is not the case for the eastern low land gorillas which sticks with its offsprings until they get new silverback. Infants in a group are more susceptible to being killed in their infant stages when the silverback dies because of them being a threat to leadership in a group so in order to avoid such scenarios they are killed however this is not so common among the gorillas because the females protect their offsprings.

Among the female gorillas in the group, they act aggressively among one another because of the need for attention from the dominant silverback and other males in order to get chances of mating and protection from any harm. However related females have closer relationships with one another whereas the males in the groups are usually connected during social gatherings like playtime, grooming time and so on.

This is one of the top 10 Facts About Gorillas. The dominant silverback in every group is highly polygamous which makes him sleep with many of the adult females in the groups; he can sleep with any female in the group. When the female is in ovulation, she will pursue the male by making lip movements and eye contact with them, she can also be seen slapping the ground which acts as an indication that she is ready for sex.

Once the male is enticed, he will show interest by touching the female and thus intercourse. In scenarios where the females get pregnant it takes 8.5 months for the female to give birth to an ‘’infant’’ which is a baby gorilla per delivery but in some instances though rare occasions they can give birth to twins which is evident among the Congo gorilla family wherein the Munyaga group, the adult female Bilali gave birth to twins but unfortunately they died after birth. This gorilla family can be seen during gorilla trekking in Congo.

The infants sleep in the same nest as the mother and its the duty of the dominant male or the dominant silverback to protect them from any harm. It is also the duty of the mother to nurture the young ones, teach them the basics of survival, and groom them.  When a baby gorilla/ infant gets to the age of three years, they are able to leave their parents nests and sleep in their own nests but near the ones of their mothers for protection. After the three years, the infant is weaned and the adult female is able to ovulate again and can get pregnant as soon as possible.

Communication is a key fact among the top 10 Facts About Gorillas. A gorilla regardless of the type has different ways of communication which can be seen during daily activities. In cases where the gorilla sees food in an area while they are traveling in their different gorilla groups, they can be heard grunting sand barking as a way of drawing the other gorilla attention to the area. During social interaction, when a gorilla is heard screaming and roaring then there is a possibility of a nearby threat which can be a result of wild animals coming into their territories, conflicts among the group these are usually produced by the silverback.

Belching and rumbling can be heard during satisfaction during breast feeding of an infant, contentment they are also heard during the time when they are resting. Gorilla communication is characterised by different displays for instance once a fight is about to break out among the gorillas,  in order to resolve the conflict, they display nine steps of actions to settle the aggression among one another that is they can be seen; hooting, symbolic feeding, rising on their feet, throwing vegetation, thumping their chests, one leg kick, sideways running which is usually done one four limbs or by rising on their feet, tearing the vegetation to let go of the frustration and at last slapping the ground to show that they have ended the conflict this is a quite interesting display once seen because of the formal way of settling their conflicts.

The eastern lowland gorillas were believed to be 17000 in numbers but today they are half their initial number, the mountain gorillas are above 1004 in number due to the improved efforts of non and governmental organizations, strict laws against poaching, increased patrols that has helped to combat poaching. The cross-river gorillas, on the other hand, are about 200- 300 in the entire world, the western lowland gorillas are 300,000 in number which beats all other gorilla numbers but this also comes with a number of threat including poaching for their skin, palms which are used as ashtrays and so on. The numbers also reduce because of contact with humans for instance in congo a number of gorillas were killed because they seemed like a threat to human life because of the fact that they were living in areas where mining is of great potential and thus they killed the gorillas in order to carry out mining. Other threats include diseases, warfare in the different parts for instance in Congo where a number of eastern lowland gorillas were killed.

10: Distinction from one another

Another interesting fact among the top 10 Facts About Gorillas is their distinction from one another just like the way humans have unique fingerprints for easy identification, the same applies to the gorilla’s nose prints. Gorillas in the wild can be distinguished from one another with their unique nose prints.