Watchlist for a Birder Touring Rwanda National Park :  Birdwatching is rewarding everywhere in the country, and a well-planned two-week itinerary is likely to result in a trip list of 300-plus species. 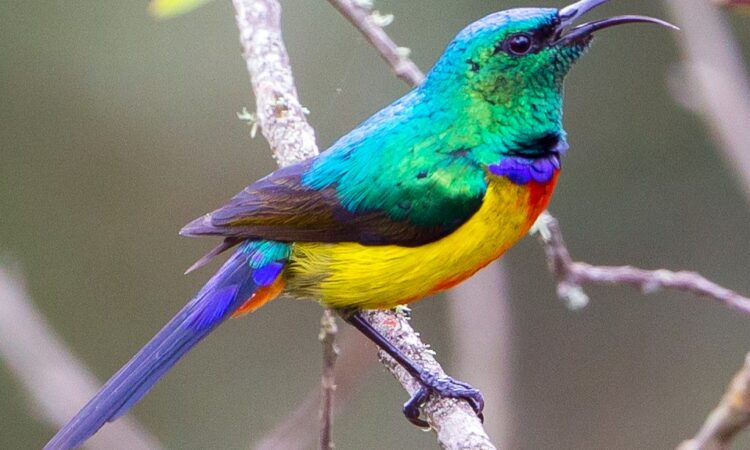 Nyungwe National Park is a tropical montane rainforest that is home to 322 bird species as well as 13 species of primate and numerous endemic plant species. So far 29 are bird species have been found here. The star attraction is undoubtedly the Red-collared Babbler and Rwanda is the only safe place to see this stunning bird. Other specialities include Rwenzori Turaco, Handsome Francolin, Rwenzori Nightjar, Grauer’s Warbler, Regal, Blue-headed and Purple Breasted Sunbirds, Grauer’s Swamp Warbler and Neumann’s Warbler. All of these and more can be seen easily from a well-maintained network of trails with the help of the park’s expert bird guides.

Gishwati national park offers exciting opportunities to watch a wide variety of Albertine Rift endemic bird species coupled with the hilly terrain which allows good views of the forest canopy. With over 126 bird species, the park is a “Great Birders Destination”. You will be provided with bird watching trails and signage, maps and brochures.

Lake Kivu offers a very relaxing stop over during a birding tour and is not without its highlights. The lake supports huge numbers of White-breasted Cormorants, Pied Kingfishers and Osprey can be seen fishing during its migration. The lake shores are home to some of Rwanda’s more common terrestrial species and hotel gardens in Karongi, Rubavu and Rusizi can offer interesting birding. Double-tooth Barbet is regularly seen in this region along with species such as Yellow-bellied Waxbill, Familiar Chat, Brown-throated Wattle-eye and Spot-flanked Barbet. The area around Kinunu also offers good birdwatching for the more common species.

The handsome spurfowl is a species of bird in the pheasant family Phasianidae. Pternistis nobilis.It is a large, up to 35 cm long, terrestrial forest bird with a dark reddish brown plumage, grey head, red bill and legs, brown iris, bare red orbital skin and rufous grey below. Both sexes are similar

The handsome francolin is distributed in mountain forests of eastern Democratic Republic of the Congo, southwest Uganda and borders between Burundi and Rwanda. It is a shy and elusive bird, more often heard than seen. The diet consists mainly of seeds.

There is one sight record from Nyungwe Forest (Rwanda), but this requires confirmation

This species has two subspecies; Fraseria lendu lendu found in northeast DRC, southwest Uganda and west Kenya, and F. lendu itombwensis, found in eastern DRC. This species has not been recorded travelling long distances (Taylor 2020), and therefore, based on the distribution across its range (BirdLife International 2021), it may form up to 5 subpopulations. Therefore the number of subpopulations is estimated to be between 2-5. As such, based on a population size of 2,100-12,700 there may be 420-6,350 mature individuals in the largest subpopulation.

The shoebill is a large, elusive, stalk-like bird with an almost prehistoric appearance, due to its oversized shoe-shaped beak. They are sometimes referred to as ‘Whalehead‘, for obvious reasons.

It’s distribution is often close to the presence of papyrus vegetation, and lungfish.  However, it does occasionally hunt and eat other prey, such as frogs, lizards, watersnakes, snails and rodents.

Shoebill were previously thought of as storks, but genetic research has re-classified them as members of the order Pelecaniformes and family Balaenicipitidae, which are large weaverbirds, genetically closer to pelicans and herons.

BirdLife International has classified it as vulnerable, due to habitat destruction, disturbance and hunting. Shoebill have specific habitat requirements for breeding, nesting and hunting, and their swamps and marshes are gradually being transformed into agricultural land, or pastures for cattle grazing.

It is rwanda’s national bird and only found at Akagera National Park . Best time to track is May through September when rain is less and food plenty.

At 70–76 cm (28–30 in) in length, it is the largest species of turaco. It has predominantly grey-blue plumage with an upright blue-black crest around 10 cm (3.9 in) high. The male and female have similar plumage. It is widespread throughout the African tropical rainforest, Watchlist for a Birder Touring Rwanda National Park.

The great blue turaco is the sole member of the subfamily Corythaeolinae within the turaco family. Its closest relatives are the go-away birds and plantain eaters of the genus Crinifer. The common ancestor of both diverged from the ancestor of all other turaco species.[3]

Generally, the great blue turaco is 70–76 cm (28–30 in) in length with a mass of 800–1,231 g. The adult great blue turaco has predominantly gray-blue upperparts with an upright blue-black crest, white chin, yellow-green lower breast and yellow belly darkening to chestnut brown posteriorly. The under tail coverts are chestnut, and under tail black and yellowish. The yellow bill has an orange-red tip, the eyes are brown, and surrounded by a ring of black bare skin. The legs and feet are black with yellow soles. The sexes have similar plumage.[5]

The great blue turaco eats leaves, flowers, as well as fruit of many plant species

The blue and yellow tail feathers of the Great blue turaco are prized for making good luck talismans. The turacos are noted for peculiar and unique pigments that give these birds their bright green, blue and red feathers. Juvenile turacos have claws on their wings that help them climb through trees.

Great blue turacos are currently classified by the IUCN as a species of “Least Concern,” though it is threatened by hunting and deforestation in some areas.

Wonderful, cartoonish bird. Note the tall black crest and the red-and-yellow bill. The tail pattern is distinctive in flight: note the black bar across the end of the tail and the pale green sides. Found in rainforest, gallery forest, and lush secondary habitat. Usually in small groups. Gives two distinctive calls, sometimes in conjunction: a deep “jeeeow” and a rapid, cackling series of incredibly loud notes, Watchlist for a Birder Touring Rwanda National Park.

This large bird has an olive belly and a distinct orange breast. The wings are brown with two distinct white bars. The eyes are black with a white ring. The top of the bird is dark brown which extends down the tail. This bird is shy and can be seen hopping on the ground in the undergrowth I search of insects or singing from a perch in a tree.

The African wattled lapwing, also known as the Senegal wattled plover or the wattled plover, is a brown lapwing belonging to the Charadriidae family. This bird is a resident in the Sub-Saharan countries of Africa. They sometimes can show seasonal movements as well but are typical resident breeders. This bird attains a length of 13.5 in (34.2cm) and is easily recognized by its white forehead, black crown, yellow facial wattles, long legs, and beak. Their face is streaked and they have a brown colored body. When they are in flight, their brown tectrix and flight feathers can be seen clearly which are separated by a white line, while the underwings are white and have black edges. They are in good number and are facing no threats as such. The white-crowned lapwing is very similar to this bird but is actually smaller in size than this lapwing, doesn’t have a red base to the wattle, and has a white belly. They prefer drier habitats of damp grassland and golf courses in Sub-Saharan Africa. These are conspicuous and unmistakable birds. They are large brown waders with a black crown, white forehead and large yellow facial wattles. The tail is white, tipped black, and the long legs are yellow.

The African Wattled Lapwing has a loud peep-peep call. It often feeds in drier habitats, such as golf courses, picking insects and other invertebrates from the ground. It lays three or four eggs on a ground scrape, Watchlist for a Birder Touring Rwanda National Park.

It is a resident breeder in most of sub-Saharan Africa outside the rainforests, although it has seasonal movements.

This species is a common breeder in wet lowland habitats, especially damp grassland

The African Wattled Lapwing is one of the species to which the Agreement on the Conservation of African-Eurasian Migratory Waterbirds (AEWA) applies.