Home » A Guide to Understanding Gorillas in Uganda, Rwanda and Congo 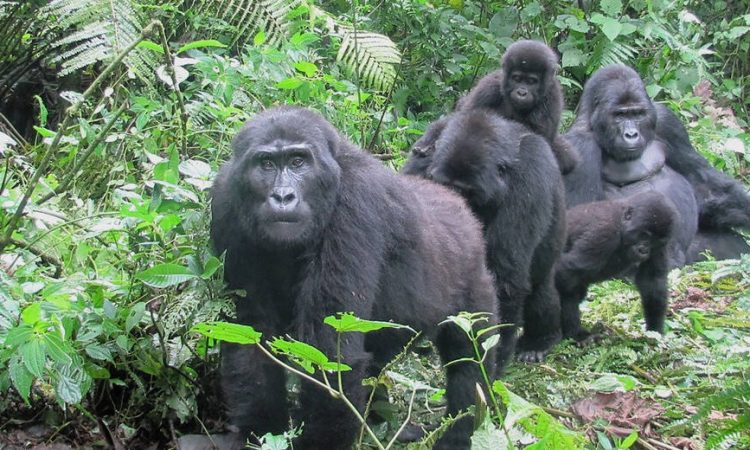 A gorilla is a gentle great ape that lives in the African continent’s equatorial regions. They exhibit various human-like emotions and personalities or behaviors, such as grief and laughing, and what distinguishes them is that they share around 98% of their DNA with humans, making them comparable to chimpanzees, man’s closest living relative.

How do Gorillas in Uganda, Rwanda and Congo look like?

Gorillas are the biggest of the great apes, having muscular bodies that include broad chests and powerful shoulders. They have hairy faces with tiny eyes, and their limbs and hands are strikingly similar to those of humans. They live in groupings as families of 5 to 15 people, with some families having as many as 40 members.

Each family is headed by a male adult ‘silverback,’ and it is he who shapes the family’s social life based on his relationships with the females. Female gorillas sexually mature at roughly 7 or 8 years of age, while males may take longer, and these give birth to one infant (though twins have been observed) every 4 to 6 years.

Types of Gorillas in Uganda, Rwanda and Congo.

The Eastern gorilla species is divided into two sub-species: mountain gorillas, whose population is estimated to be just over 1063 according to a survey conducted in 2018 by the greater Virunga trans-boundary collaboration in collaboration with the ministry of tourism, wildlife, and antiques of Uganda), and eastern lowland gorillas, whose population is estimated to have dropped by nearly 50% from the 17,000 population in the mid-1990s according to estimates given by gorilla scientists.

Human encroachment has reduced the extent of their habitat from 8,000 square miles to about 5,500 square miles, comprising around 13% of what was the natural habitat. The eastern lowland gorilla is a squat creature with a short muzzle and large hands. They can also reach a height of 4 ft to 5.5 ft when standing on two feet, with an average body weight of 450 pounds.

This subspecies prefers thickly wooded places and may thrive at elevations ranging from 8000 to 13000 feet. Standing on two feet, these gorillas may reach heights of 4 to 5.5 feet, and an adult gorilla can weigh up to 480 pounds.

Mountain gorillas have a thick coat and a lot of fur, which allows them to survive up in the colder sections of the wooded areas. Because of human encroachment on their native habitat, mountain gorillas are being driven further into the forest, where temperatures and climatic conditions are often severe.

Today this subspecies is also considered critically endangered with just over 1,000 mountain gorillas in the whole world, a number which has in fact risen from 850 back in the 1990’s to what it is today. Big thanks to the great conservation works being done by the governments of Rwanda, Uganda and the Democratic Republic of Congo that have seen this increase in mountain gorillas over these past few years.

The Cross-River gorillas are mostly found in the forests of Nigeria and Cameroon. When standing on two legs, they may reach a height of 4 to 5.5 feet and a weight of up to 450 pounds. It is believed that this subspecies of gorillas inhabits an area of around 3,000 square miles, and presently the entire region is heavily populated by humans who, regrettably, remove this natural habitat to make place for human agricultural operations, livestock rearing, and even wood harvesting. The Cross-River gorillas have a tiny population now because to the heavy poaching that occurs in this area.

Unfortunately, the Cross-River Gorilla is now classified as a severely endangered animal species. On the positive side, the governments of Nigeria and Cameroon, in collaboration with WWF and other wildlife conservation groups, are working hard to put in place safeguards to conserve this gorilla’s native habitat, given that it crosses borders into both Nigeria and Cameroon.

Continued sensitization and awareness campaigns are underway in these two nations, particularly to enlighten local people living near these sanctuaries about the benefits of conserving and maintaining this subspecies, A Guide to Understanding Gorillas in Uganda.

This gorilla subspecies is the most common and has the greatest number of individuals. These are found in Congo and Cameroon and dwell in a variety of environments, including rainforests and wetlands. They are physically smaller than other gorilla subspecies, with larger heads and smaller ears, dark grey coats, and reddish-brown chests. Their precise population is unknown because many of them escape inside the verdant Forest within their homes. Nonetheless, they are classified as an endangered species, with poaching and encroachment on their native habitat being the greatest threat, A Guide to Understanding Gorillas in Uganda.

Both gorilla species inhabit in Africa’s tropical and subtropical regions; yet, what is the primary distinction between these two-gorilla species? The main distinction between these two is the sound they make when conversing, as well as the size of their noses. Furthermore, Eastern gorillas tend to be larger in stature than their Western counterparts.