8 Facts About Virunga Gorilla Trekking will give you the best insights into what gorilla trekking in Virunga National Park is all about and why it is one of the best gorilla trekking national parks. Virunga National Park is famous for its 2 active volcanoes i.e. mount Nyiragongo and mount Nyamuragira which are part of the Virunga mountains chain and also a number of attractions like the mountain gorillas, Senkwekwe gorilla sanctuary where you will have a chance to visit orphaned gorillas by providing a number of services to them like feeding them, playing with them among other services. 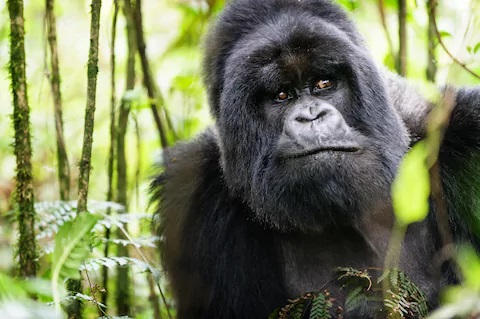 Gorilla Trekking is done in Groups: While carrying out gorilla trekking in virunga national park, it is important to remember that the activity limits the number of people in a particular gorilla trekking group which is a limit of eight people. This is because of the gorillas being fragile primate species that are not accustomed to large groups of people, therefore, it limits the number of people if you’re interested in participating in gorilla trekking in virunga national park then it is better you book your gorilla permit from your trusted tour company as early as possible so that you don’t miss out on the interesting activity in the park.

Specific time with a gorilla group: Another of the 8 facts about virunga gorilla trekking is the fact that while carrying out the activity, there is a specific time you’re supposed to spend with the gorillas while you come into contact with a specific gorilla family. The gorilla trekking process can take a maximum of 8 hours while tracking for the primates but you will have to spend one hour with the gorilla family in order to avoid stressing the gorillas and because there is the need to conserve the gorillas, it can affect them, and also because the gorillas live in organized families there should be time for them to carry out their daily activities like feeding patterns, building nests which is usually done during the evening hours of the day among other reasons.

7 meters distance from the gorillas: During gorilla trekking, you will track through the forests in the park in order to get to the Congo gorilla families. When you access the gorilla groups there are some guidelines you should follow for instance while you come in contact with the gorillas, you are supposed to maintain a distance of 7 metres away from the gorilla species to avoid contracting diseases to them because they are fragile animals.

Ill people are not allowed to trek: Because gorillas are highly vulnerable and fragile primates, they can easily contract diseases from humans. Therefore any ill tourist interested in gorilla trekking, it is advisable to carry out the activity when they are better or disease-free to avoid passing the disease to the gorillas.

Age limit of 15 Years on the gorilla trekking: Gorilla trekking is only carried out by children above 15 years of age reason being that children tend to make noise during encounters with animals and because the gorillas are complicated primates that can react violently towards the tourists which can inflict pain to the tourists. Therefore children above 15 years of age are considered to be mature and able to control noise while in contact with the gorillas.

Best done in the dry season: Gorilla trekking in virunga national park is best done during the dry season because there is ease in trekking because the forests are not slippery like during the wet season when the rains make the ground soggy and impassable which can make the hike to the gorilla families strenuous. Interested in carrying out gorilla trekking in virunga national park, then you should visit the park during months march, February, June, July, August, December, and January in the dry season.

Safety: Gorilla trekking in virunga national park is one of the safest activities that can be carried out while you visit Congo. After being closed for some time, Virunga National Park was re-opened with the security being much more tighter than usual, safety precautions are carried before they participate in the activity, for instance, you will first go for briefing about the do’s and don’ts of gorilla trekking while in the park. The tourists are accompanied by the park rangers and the military personnel to ensure that you carry out your activities in a safe environment.