How to access Nyungwe National Park is quite a simple task where the traveler will be led to the park by their guide when they arrive. Nyungwe National park is the primate paradise in Rwanda where you should not miss out on visiting while participating in the Rwanda tour. While visiting Nyungwe national park, you will have the utmost adventure with regards to primate safaris in Rwanda. The park boasts of a number of activities that can be carried out to have an ultimate wildlife experience. Among the activities that can be carried out while you’re in the park include

Canopy walk: The canopy walk can be carried out after hiking the igishigishigi trail which leads to the canopy walkway that will give exceptional views of the park while you walk along its different levels. While on the walkway, don’t forget to look within the tree branches because you will get to see a number of primate species swinging in the branches among the common primates that can be while on the walkway are the chimpanzees, you also have a chance to see a number of bird and butterfly species.

Hiking the trails: There are different trails in the park that can be hiked that lead you to exceptional adventures and attractions that are hidden within the park. Some of the trails that can be hiked include the Kamiranzovu trail where you will find the Kamiranzovu swamp which is believed to have killed a number of elephants after they drowned in the swamp where you can also see the skull of an elephant when you reach the swamp. Irebero trail, the karamba birding trail which are known as the birding areas while in the park because

Birding: Birding in the park is quite amazing because you will have a chance to see over 300 bird species some of which are endemic to Nyungwe national park. The bird species can be seen in the tree branches of the park where they establish their nests. The numerous bird species can also be found along the numerous hiking trails in the park like the karamba birding trails, the Irebero trail, the Isumo waterfalls trails which you can access after carrying out the Isumo waterfall hike which is an exciting adventure where you will see a number of bird species.

Chimpanzee trekking: Chimpanzee trekking is one of the famous activities in the park, the park boasts of over 500 chimpanzee species that can be seen and visited in their habituated groups. Chimpanzee trekking in Nyungwe National park is one of the most rewarding activities where you will get to interact with the wild animals by watching their ways in the world how they react in the presence of the trekkers who take on the activity. You will get to see their different feeding patterns, their co-existence with one another which will be rewarding once seen. During chimpanzee trekking, you will get the chance to across a number of other primate species like the vervet monkey, Mona monkey, blue monkey, black and white bat-eared monkey all of which can be found in the park.

Before participating in the above activities, you will first get to access the park to participate in the activities in the park which can be done in the shortest time because of the good transport system in the country and the availability of transport means.

Nyungwe national park is located in the Rusizi district, the south western part of Rwanda can be accessed by road transport or by air transport which you will have a chance to choose from depending on your budget and your urge to visit the park.

By using road transport, you will have a chance to either use private means or public means depending on the arrangements of your trip. If you land at Kigali international airport where you will either be picked by a representative of a tour company you made your tour arrangements with or you can hire private cars at the airport where you will be charged an amount or you can take public means like the buses which operate to the park daily. Nyungwe national park can be accessed using different routes to reach and because of the improved transport network, it makes it easier for one to access the park.

From Kigali international airport, the park is 190 kilometers away from the airport which will take you about four hours to reach but the four hours will enable you to see exceptional views, for instance, a thousand hills that can be seen, the ways locals in the areas carry out their daily activities which is quite new to tourists that have no idea about village life especially tourists from modern countries which will be an exciting adventure. 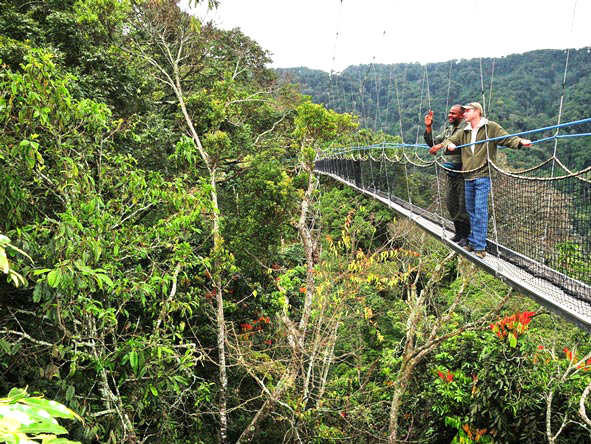