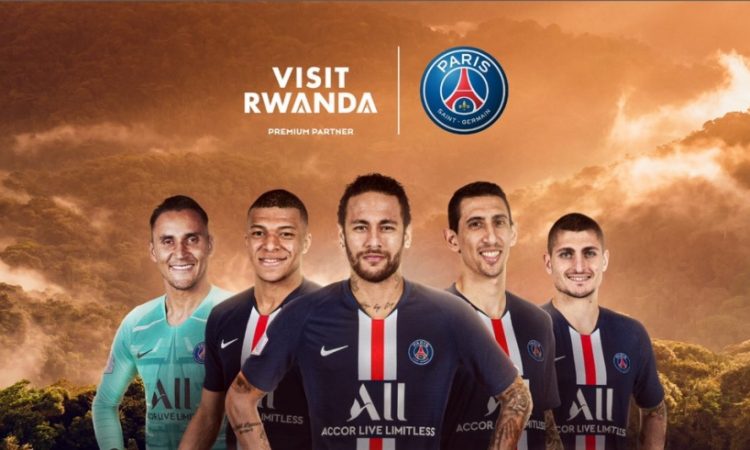 The growth has not only been financial but even to the people, the country’s locals have gotten employment in the tourism sectors and other related sectors that have further benefited the country’s social-economic status.

This deal has come after the 3 year arsenal Rwanda deal that was signed in May 2018 registered success of 80% returns to the country’s tourism industry, not mentioning other benefits.

The deal with PSG that is considered a lifestyle partnership is expected to give Rwanda another platform of exposure in the world.  The deal covers aspects far beyond football and tourism and will shine a light on Rwanda’s tourism destinations and other initiatives like art, fashion, tea and coffee among other things.  This deal will advertise Rwanda as a brand with the tag “VISIT RWANDA” on backdrop banners and on female player jerseys and men training kits. Not similar to the Arsenal deal, the “VISIT RWANDA” brand will not appear on the sleeves of the players. Rwanda will also from now on forth be the exclusive supplier of tea and coffee to the PSG’s home stadium – Parc des Princes as this football season starts, on top of showcasing the country’s brands during the Paris week.

Furthermore the deal will extend to football development programs in Rwanda as PSG will keep nurturing and promoting young players in Rwanda who want to get into professional football through mentoring and coaching sessions for emerging players from PSG players.

As some are asking why Rwanda would go out to partner with PSG yet it still has a running deal with Arsenal the country’s  Tourism body – Rwanda Development Board says the reason for Rwanda partnering with PSG are numerous and they are sure of registering more success just like with the Arsenal deal.

PSG offers Rwanda exposure in the French market and the club also appeals to the younger population meaning the country’s exposure will cut across all generations per say. Since this is a lifestyle partnership PSG, is the right club to partner with at this point in time because it’s a popular, fast-growing vibrant club in Europe. This deal is also a great topping to the Arsenal deal.

Rwanda has seen great benefits from the Arsenal deal and expects to see even more with the PSG deal through the country’s brand being known all over, the sale of the country’s products to the European Market like the supplying of coffee and tea to PSG and growth in developmental partnerships that will further boost the country’s economy.

After the arsenal deal Rwanda, learned of similar opportunities with different clubs however like Arsenal, PSG’s values are similar to Rwanda’s values and that why Rwanda has gone on to pursue and eventually sign this deal with PSG.

The Arsenal deal was mainly to boost Rwanda’s tourism sector but the deal with PSG will also cut cross to art, fashion, Tea and coffee.

Like the arsenal deal, the main goal is to have people across the world visit Rwanda and consume Rwanda products.

Rwanda is commonly known as a city of a thousand hills, because of its hilly landscape that offers any traveler beautiful and unique sceneries even just driving through the different provinces. The c.ountry is also home to the endangered mountain gorillas that are found in Volcanoes National Park; this park is also home to the golden monkeys and offers tourists a great hike on the Mount Bisoke to the summit.

Other parks in Rwanda include Nyungwe National Park that offers you a great canopy walk experience and a trek in the great Nyungwe forest searching for the endangered chimpanzees. Akagera National Park, the only wildlife park in Rwanda offers you a breath taking wildlife experience that will leave you wanting for more and more.

You can also visit the country’s genocide memorial sites to appreciate the history of the genocide, survival and rebuilding the ruins as you experience the regrowth of the different cultures and their identities that have become stronger and better after the genocide ordeal. The cultures also go into the rich agricultural sector of the country that boosts in tea and coffee growing. For anyone visiting Rwanda, you should make it a point to visit at least one of the plantations you will be amazed at the richness of the tea and coffee, go ahead test it (coffee or tea or both) and you will appreciate it even further.

Rwanda is a rich country, with unique, diverse and vibrant beauty. Give yourself a treat and visit the country today, you will want to come back again.