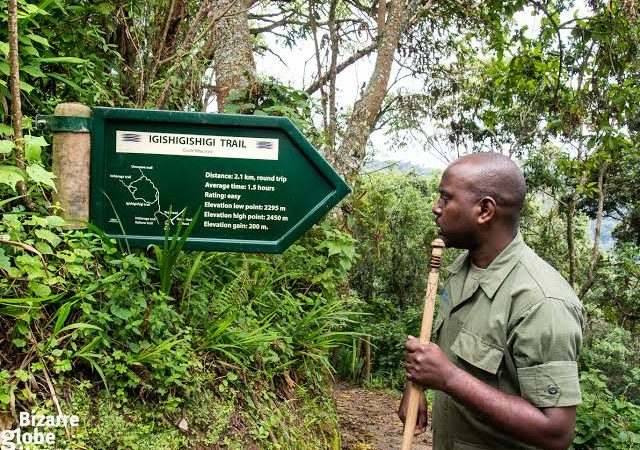 Bigugu trail: Bigugu trail is one of the most rewarding trails that one can embark on while in Nyungwe national park however, it is one of the hardest trails in the park. After briefing at the Uwinka reception area, you will then embark on your trail in the park to have the best time while carrying out the hikes.

The Bigugu trail leads to the highest peak in the park which is Bigugu peak but before you reach the peak, you will see a number of chimpanzees on the lower slopes of mountain Bigugu and also have magnificent views of a number of attractions like a number of wild animals like bushbucks, and so many more.

While carrying out the hike on the Bigugu trail, you will also come across the Rwanda development board radio station where they monitor the activities in the park to avoid poaching in the park. Through the trail after the Rwanda development board radio station, you will proceed to Bigugu peak the highest point in Nyungwe forest national park where you will have exceptional views, for instance, you will have the chance to see Lake kivu, the Banda village an interesting cultural village where you will learn more about the culture of Rwanda when you visit the group, the cultural village can also be seen during the Rwanda cultural tours, you will also see Kigogo mountain and a number of other attractions.

Kamiranzovu trail: Kamiranzovu trail is another interesting trail that you will take on while in Nyungwe national park. The word ‘’Kamiranzovu’’ means swallowing the elephants in Kinyarwanda is the name of the swamp where you can find the swamp at the end of the trail. The swamp is believed to have killed a number of elephants within the park, they were trapped in the marsh and in the end, you will find a skull of the elephant at the end which acts as evidence for the tragic events that took place.

While on the trail, you will see waterfalls that connect to Lake Kivu that can be seen in between the two mountains which will offer beautiful views for photography, they will also offer relaxing breezes while in the park where you can also carry out picnics as a way to enjoy your time in the park. You will see a number of primate species while on the trail especially the chimpanzees and the black and white colobus monkeys.

Karamba birding trail: Looking for the easiest trail with a generally flat area that will offer exceptional views while in Nyungwe national park, karamba birding trail is the trail to embark on to have an amazing time in the park.  The area through the trail was affected by human activities for instance mining where a number of trees were cut down to carry out because of the stone quarrying activities that were being carried out and also during the 1994 Rwanda genocide, the area was cleared to create land for a military camp which can be seen with the land that was cleared.

With the short trees that are recovering from the effects of human activities, it has made birding quite easy because of the short tree which makes watching the birds easy. On the trail, you will see a number of attractions aside from the birds like the numerous flowering plants a number of plant species and many more.

Igishigishigi trail: The igishigishigi trail starts from the north end of the Uwinka reception area; you will walk through to the Uwinka ridge. Where you will find a number of staircases that you can climb which will lead you to the flat area of the Buhoro trail and on the right junction, you will connect to the igishigishigi trail. At the trail you will come across the canopy walkway while at the walk way, you will have amazing views of the park where you will see the different bird species lining up on the metal lines of the bridge, different monkey species can also be seen swinging from different tree branches which will be amazing to see while on the walkway.

Ngabwe trail: The trail starts from the park entrance at Kitabi gate from a road which is 3 kilometres from the entrance of Nyungwe forest reception area, while hiking through the trail, you will come across different attractions like the Kitabi tea estate where you will be taught how to harvest tea, you will also move through the plantations and as you hike through the trail, you will see a number of animals and primate species like the white colobus monkey, Angolan colobus monkey, grey cheeked mangabeys, Black fronted duiker and so on.

Muzimu trail: While hiking the Muzimu trail, you will go through the eucalyptus trees and the pine plantations from Gisakura entrance and just like karamba birding trail; it is relatively short and easy to climb. The trail will give spectacular view while carrying out the hike through the trail, you will see the Bigugu peak the highest point in the park, and you will also see Lake Kivu, different flower species, numerous bird species and a number of other spectacular views

Umugote trail: While hiking Umugote trail, you will have a chance to see a number of attractions like Kibira national park can also be seen from a distance, Busozo Mountain can also be seen in the foreground Bukamba Mountain and Rugazi Mountain. Still on the trail, you will come across a number of tree species like the strangler figs which are a source of food to the chimpanzees and monkeys which can be seen in the area, bird species can also be seen like the blue turaco, handsome francolins, crowned eagles, mountain buzzard and many more. Primate species are also seen for instance the chimpanzees, the black and white colobus monkeys are seen, other animals like the bush pigs, and the duikers are seen.

Umuyove trail: Primate species can be seen hanging from the big mahogany trees, for instance, the Angolan colobus, grey-cheeked mangabeys and so on. As compared to other hiking trails in Nyungwe national park, Umuyove trail is the shortest trail in the entire park that can be hiked in the shortest time.

The Congo- Nile divide trail: The Congo- Nile divide trail is also another hard trail among the hiking trails in Nyungwe national park. The trail will give you the opportunity to see different animal species that can be seen along the trail like Primate species are also seen for instance the chimpanzees, the black and white colobus monkeys, Angolan monkeys animals like the bush pigs, and the duikers can also be seen.

Rukuzi trail: The trail is 9kilometres long and it takes about 5 hours to be completed the trail is difficult to be hiked usually chimpanzees are found along the trail but there is a possibility of not seeing any though but with or without them the trail is spectacular with the green vegetation cover and the cool breezes which offer relaxation.

Irebero trail: The trail will offer spectacular views for instance you will get the chance to see lake kivu, primate species like the chimpanzees, black and white colobus monkeys, the Angolan monkeys, a number of numerous plant species that are a source of food to the primates and so on.