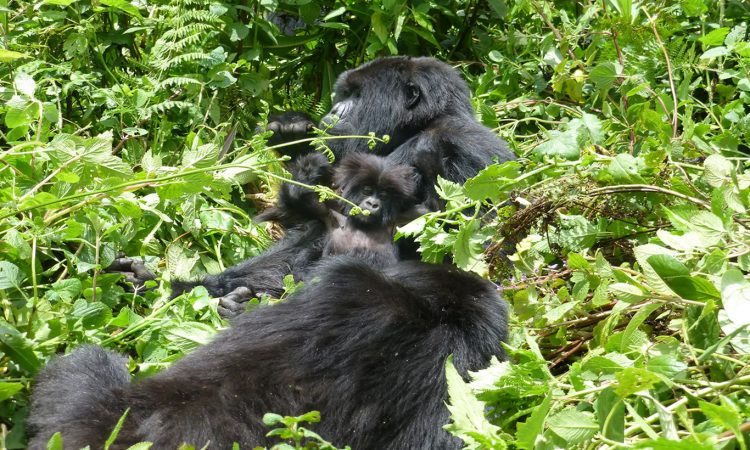 The park is known for its primate species which include the endangered mountain gorillas, 178 bird species where you will see some of the Rwenzori and Virunga mountains endemic bird species, in the park, you will also see a number of mammal species. Tourists on their Rwanda tour will have amazing wildlife safaris in volcanoes national park where you will have the opportunity to see a number of attractions and participate in a number of activities while in volcanoes national park as explained below;

The Park is home to the endangered mountain gorillas that can be seen in the bamboo trees of the different Virunga mountains in the park. In the park, you will also have the opportunity to see a number of monkey species in the park like the black and white colobus monkeys, red tailed monkeys, Golden monkeys, Dent’s Mona Monkey, De Brazza’s monkey, Olive baboon, Red colobus monkey, Grey-cheeked Mangabey, Hamlyn’s Monkey, Blue Monkey, Mantled Guereza and the endangered golden monkeys. For a tourist interested in seeing the different primate species in the park, they can participate in the different activities which include the following

Golden monkey trekking is another interesting activity that can be carried out during the wildlife safaris in volcanoes National park where you will get to track the golden monkeys within the park. Golden Monkeys can be seen when they hike the Virunga Mountains because they are found within the bamboo trees of the different virunga mountains.

When tourists come into contact with the golden monkeys they will get to know the different facts about golden monkeys like how they eat bamboo as their source of food, they spend most of their time being active all day and sleep during the night, they sleep in the same nests every night. Other animal species that can be seen in the park include the African buffalo, duiker, warthogs among others, the spotted hyena can be seen during the different activities like birding, golden monkey trekking among other activities in the Park.

Bird species in the park

The park is a home to over 178 bird species and if you’re interested in seeing the different bird species in the park, they should participate birding another satisfying activity that will enable you to see a number of bird species like Pockefellers’s sunbird, Chapin’s flycatcher, Rwenzori Batis, strange weaver, red-throated alethe blue turaco, Ross’s turaco, coqui Francolin, long-tailed cisticola, bubbling cisticola, Miombo wren warbler, Chubb’s cisticola, Red-billed Teal, Paradise Flycatcher, African Hobby African Spoonbill, Black Kite among other bird species in the park that will make your wildlife safaris in memorable.