Best Time to Visit Volcanoes National Park is that time of the year when the park is easily accessible and activities done in the park are very convenient at that time. Volcanoes national park is well known for housing half of the world’s endangered mountain gorillas that are found along the virunga mountains shared by Rwanda where we find volcanoes national park, Uganda we can find Mgahinga National Park and the Democratic Republic of Congo where we find the Virunga national park. The park is located in Ruhengeri district, a district known for having a number of different tourist attractions that can be seen while carrying out Rwanda city tours. The district is home to Volcanoes National Park a park where gorilla trekking in Rwanda, Rwanda golden monkey trekking, visiting dian Fossey’s grave and a number of many tours can be carried out while in Rwanda. 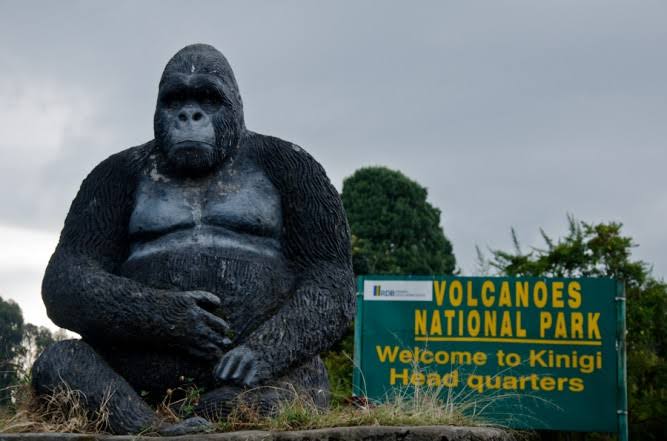 The park is home to a number of gorilla families including the Agashya, Hirwa, Amahoro, Ugenda gorilla families and many more which can be seen after hiking the Virunga Mountains in the park. Gorilla trekking will involve you tracking through the thick vegetation along the slopes of the mountains where you will find a number of attractions like the bird species, golden monkeys in the bamboo trees as you get closer to the primate species, you will hear grunts, roars, and growls and you will know you’re in the territory of a specific gorilla family. On reaching the gorillas you will spend an hour with them understanding their behavior in the wild which is quite fascinating which can be memorable while you carry out Rwanda gorilla tours.

You can trek the golden monkeys in the park as well to make your tour memorable the activity involves hiking the Virunga Mountains in order to access the groups that are usually found in the bamboo trees of the mountains. The endangered species are an easy primate species to track because they don’t make new nests daily like the gorilla species. Other primate species that can be seen during the hike to the golden monkeys include the black and white colobus monkeys, vervet monkeys among other species of monkeys.

You will also carry out the virunga mountains hike where you will hike the different virunga mountains in the volcanoes national park which include Mount Gahinga, Mount Muhabura, Mount Sabyinyo, Mount Karisimbi, and Mount Bisoke which will offer you amazing views and you will also see a number of attractions including the twin lakes of Burera and Ruhondo while at the summit of Mount Muhabura, Lake kivu, different gorilla families among other attractions in the park

Visiting the twin lakes of Burera a d Ruhondo

The twin lakes of Burera and Ruhondo from the park can be accessed after the hike down mount Muhabura where you will find the lakes that were formed after the effects of volcanic eruption on the mountain, at the lakes, there are a number of activities that can be carried out like canoeing, fishing, cultural encounters with the people around the park, birding among other activities. Other activities that can be carried out while at volcanoes national park including the visits to the Musanze caves, visiting the Dian Fossey’s grave and also visiting the Ibyiwacu to know more about the history of Rwanda.

Rwanda is characterised by two seasons the dry and two wet seasons where there are two dry seasons and one wet season and the rest of the months are characterised by the dry and the wet months. The different seasons can influence your tourism activities while in volcanoes national park, therefore, it is important to put in mind the nature of your activities and see whether they will be affected by the weather conditions in the park.

The two wet seasons include the months of mid-February to May and from mid and the second season is from September to mid-December. The dry season can be seen in the months December to February it’s the short dry season and from the months of June to mid-September which is the long dry season where a number of tourism activities in Volcanoes National Park are carried out and the rest of the months are a combination of dry and wet months.

Dry Seasons – June to mid-September and December to February

In volcanoes national park the longest dry season of June to mid-September, you will participate in a number of activities because of the ease to carry them out, for instance, virunga mountains hike because hiking the mountains is best done in the dry season where accidents like slipping off because of the slippery grounds can be avoided like in the wet seasons.

Gorilla trekking in the park is also easy because of the ease of hike to the different mountain slopes in order to participate in the activities. It should be noted that during the dry season, gorillas move a lot looking for areas with plenty of food which can be a little hectic for hikers interested in gorilla trekking but with the help of the tour guides and the rangers, you will be able to access the gorillas in the shortest time possible because of their tracking skills. Other activities that will be participated in include golden monkey trekking, birding, visiting the Musanze caves, visiting the coffee plantations around the park.

March to May and October to November the wet months of the park, you can participate in every park activities like during the dry months however there can be a number of difficulties while carrying the activities out.

March to May is the long wet season but unlike other countries in Europe, in Rwanda, the rains cannot go on for the whole day, therefore, it can rain in the morning and you carry out activities in the evening and vice versa. Some of the activities that can be carried out during the wet season include birding because a number of flowering plants begin to blossom which is a source of food to the birds which makes it easy for the birds to be spotted. Photography in the park is also perfect during this time because of the lighting, green vegetation, and beautiful blue skies.

Primate tracking is also easy during the rainy season because food s always plenty limiting movement of the primates in search of food however it can be a little strenuous because the mountains tend to be slippery because of the rains and hence causing difficulty.