Cultural Encounters in Volcanoes National Park are one of the top tourist activities carried out in the park by travelers interested in exploring the culture of the communities in Rwanda. Volcanoes National Park is famous for housing the half of the world’s remaining endangered mountain gorillas that are found along the slopes of the Virunga Mountains. While carrying out your Rwanda tour, you can participate in a number of activities in Volcanoes national park where you will have an amazing time while carrying out the tour to the park. 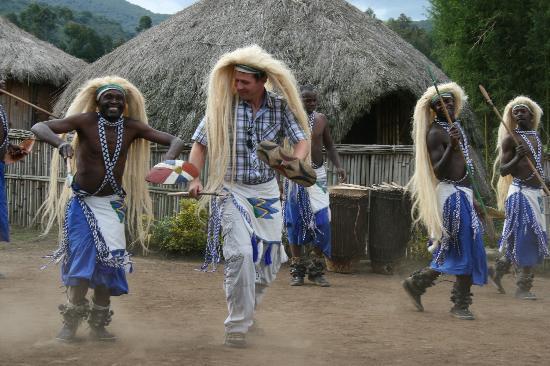 From Kigali international airport, the park is approximately 120 kilometers which will take you about 2 hours to reach the park in order to participate in the amazing activities that will keep you engaged throughout the time you spend in the national park. For budget tourists, you can use public transport means that can be got from Kigali city bus terminal or in the Gisenyi bus terminal where you get different buses heading to the park at any given time of the day, therefore, you can access the park any time you want because there are different means of transport that head to the park daily at any given time of the day.

The Cultural Encounters in Volcanoes National Park in the Ibyiwacu cultural village will offer amazing experiences if you’re interested in knowing more about the culture of Rwanda. While you visit the cultural village, you will participate in a number of activities like community walks, banana beer making, subsistence farming, and preparation of local dishes among other activities.

The cultural village gives a looks back to a number of years ago when the country had was under the kingdoms.  On reaching the cultural village, you will be welcomed by guards protecting a village where you will find a number of huts like in the old times and here you will be in the king’s palace for a day. You will have an amazing time in the village and if you’re lucky, you will be chosen to the king or queen for the day where you will be dressed in the traditional attire of the king and queens which is quite entertaining. After choosing the king for the day, a fire will be lit just like it was lit during the time when the kingdoms still existed and a medicine man will come in front of you making traditional herbs that were used as medicine a long time ago.

The king and queen will be entertained and also other tourists will be entertained through different cultural dances and plays, traditional marriages will be also be carried out to show how it was done during the old times which is quite interesting once you take part in the activity. You will also be taught on farming using traditional tools like hand hoes you will be taught how to harvest a number of crops, weeding, you will also be taught how to make banana beer which is a delicious drink that you will have a chance to taste if interested.

Visiting the Ibyiwacu cultural village will have amazing experiences with your encounters with the locals and you will be able to get to understand more about the culture of Rwanda.

Other activities in Volcanoes National Park

You can also carry out a number of activities in volcanoes national park and then visit the Ibyiwacu village as a supplement on your tour to the park which includes the following;

Hiking the Virunga Mountains: There are different virunga mountains that can be hiked while in volcanoes national park including Mount Sabyinyo, Mount Gahinga, Mount Muhabura, Mount Bisoke, Mount Karisimbi which can be hiked to see a number of attractions, for instance, the twin lakes of Burera and Ruhondo that can be seen after hiking mount Muhabura, you can also see Lake Kivu among other attractions. Other Virunga mountains that can be seen include; mount Nyiragongo and Mount Mikeno and Mount Nyamuragira in virunga national park, you will also visit mgahinga national park.

Dian Fossey was an American primatologist that worked hard to ensure that gorillas in volcanoes national park where protected from poachers who were carrying out poaching in Volcanoes national park, Dian Fossey was found dead in her cabin and no one was connected to her murder. Before her murder, she established the Karisoke research station where she protected and treated the orphaned gorillas, and gorillas that were hurt during poaching. After her murder, she was buried in the gorilla cemetery with her gorilla friends that lost their lives during poaching, in your safari in the park, you can visit Dian Fossey’s grave.